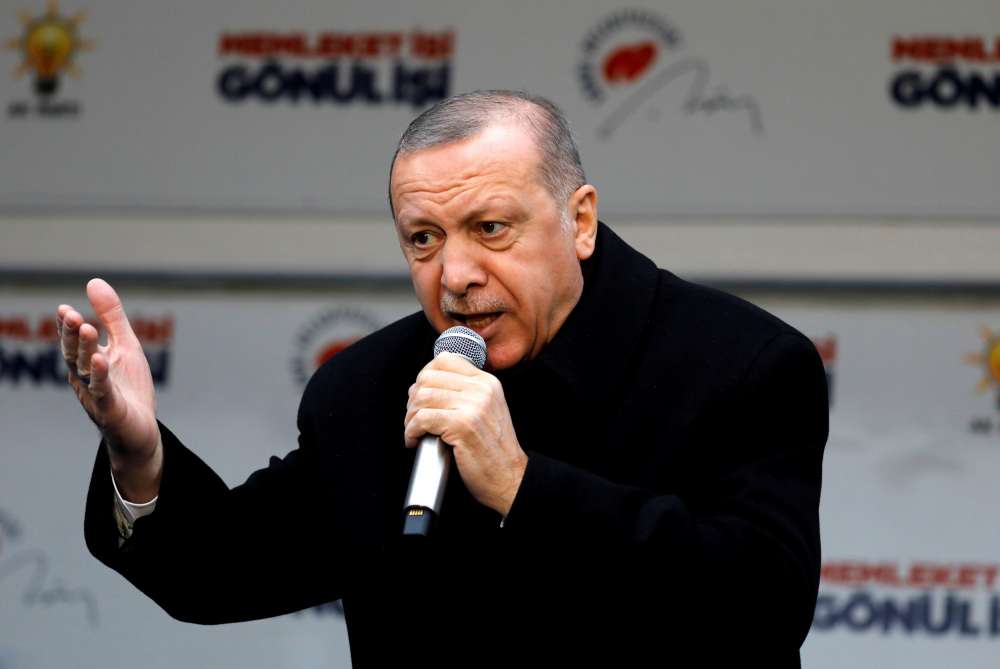 With Turkey’s local elections a month away, support for President Tayyip Erdogan’s AK Party is being eroded by a deterioration in the economy, according to opinion polls and political party sources.

Erdogan’s electoral success over the last 16 years of AK Party (AKP) rule has been driven by solid economic growth that raised living standards for the major emerging economy’s population of 82 million.

But the currency crisis that wiped some 30 percent off the value of the lira last year has led to economic hardship for many voters and fuelled disenchantment.

AKP officials said polls carried out for the party show its support at 36.8-38 percent, with its nationalist MHP allies on 10.5-11 percent. In parliamentary elections last year, Erdogan’s party won 42.6 percent of votes with the MHP on 11.1 percent.

Opinion polls put opposition candidate for mayor of the capital Ankara Mansur Yavas 3 percentage points ahead of his AKP rival, while in Istanbul the opposition’s Ekrem Imamoglu has narrowed the lead of the AKP’s Binali Yildirim to 1.5 points.

“Economic developments have had an impact in the two cities,” said one source close to the AKP. “Rising unemployment, inflation, company bankruptcies, the fear of a weakening currency and related news have had a negative (impact).”

With annual inflation around 20 percent, the government this month launched the sale of cheap vegetables in state-run markets in Istanbul and Ankara to bring prices down. For many, however, that reinforced the impression of economic deterioration.

“The (state) regulated sales actually gave the impression of things going backwards after 16 years of progress. There was also criticism that these (sales) did not happen in other cities,” the source said.

Gross domestic product growth slowed sharply to 1.6 percent in the third quarter and leading indicators point to a further worsening since then. Unemployment rose to 12.3 percent — or nearly 4 million people — in the fourth quarter of last year, up from 10.3 percent a year earlier.

“Various steps must be taken on the economy. Voters must be given confidence and a sense of prosperity again, but indicators are not very solid,” one AK Party official said.

“This is our weakest side. The situation emerging in polls is largely a reflection of this,” he said.

The source close to the AKP said the “worrying situation” in Istanbul and Ankara was also reflected in some other provinces, such as Antalya in the south and Bursa in the west.

Murat Sari, head of the Konsensus polling agency, said the election battle was on a knife edge in both Istanbul and Ankara, which have been under AKP control throughout Erdogan’s time in power. Erdogan himself was mayor of Istanbul between 1994 and 1998.

“Three out of four voters say they are having trouble getting by,” said Sari, adding there was dissatisfaction with municipal services in Istanbul. “Aside from satisfaction on services, the people want new faces, new names.”

An official from the main opposition Republican People’s Party (CHP) said his party would in all likelihood win in Ankara and also expected to clinch the mayoral race in Istanbul.

By In Cyprus
Previous articleHow much does your government spy on you? U.N. may rank the snoopers
Next articleCyprus and Russia sign protocol to develop cooperation