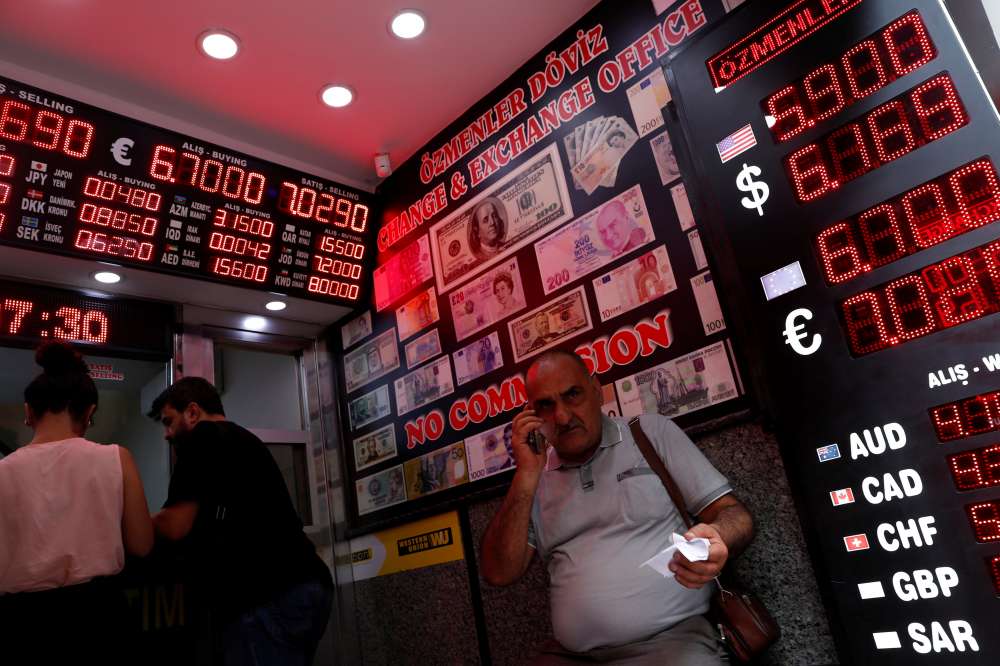 Turkey’s battered lira weakened 5% on Friday after a Turkish court rejected a U.S. Christian pastor’s appeal for release, a day after the United States warned of further sanctions unless Ankara hands over the detained minister.

The currency has lost nearly 40% of its value against the dollar this year, hit by Ankara’s worsening rift with Washington and investor alarm about President Tayyip Erdogan’s influence over monetary policy. Erdogan, a self-described “enemy of interest rates”, wants to lower borrowing costs despite high inflation.

The lira crisis has deepened concerns about the broader economy – particularly Turkey’s dependence on energy imports and whether foreign-currency debt levels pose a risk to the banking sector.

“There has been no sign that the central bank will be allowed to raise interest rates significantly and return rates to positive territory,” said William Jackson of Capital Economics in a note to clients. “Similarly, there has been no improvement in relations with the U.S. and additional sanctions may be on the horizon.”

A court in the western province of Izmir rejected an appeal to release the pastor, Andrew Brunson, from house arrest, saying evidence was still being collected and he posed a potential flight risk, according to a copy of the court ruling seen by Reuters.

Brunson, from North Carolina, is under house arrest as his trial on terrorism charges continues. He has denied the charges, and his case has been taken up by U.S. President Donald Trump, who counts evangelical Christians among his core supporters.

U.S. Treasury Secretary Steven Mnuchin told Trump at a cabinet meeting on Thursday that sanctions were ready to be put in place if Brunson were not freed.

The Turkish banking watchdog has taken steps to stabilise the currency, limiting futures transactions for offshore investors and lowering limits on swap transactions. But some economists have called for more decisive moves.

Turkey and its firms face repayments of nearly $3.8 billion on foreign currency bonds in October, Societe General has calculated. For companies, the cost of servicing foreign debt has risen by a quarter in lira terms in the past two months.

Standard & Poor’s is scheduled to release a review of Turkey’s sovereign credit rating after market close on Friday.

One currency trader said Friday’s lira weakness was driven by “the new U.S. sanctions threat and the S&P decision, with position-closing in markets ahead of the public holiday”.

Turkish markets will be closed from midday on Monday for the rest of the week for the Muslim Eid al-Adha festival.

Finance Minister Berat Albayrak, Erdogan’s son-in-law, told investors on Thursday that Turkey would emerge stronger from the currency crisis, insisting its banks were healthy and signalling it could ride out the dispute with Washington.

Economists gave Albayrak’s presentation a qualified welcome and the lira initially found some support, helped by Qatar’s pledge to invest $15 billion in Turkey.

However, deep concerns remain about the potential for damage to the economy. Turkey is dependent on imports, priced in hard currency, for almost all of its energy needs.

For years Turkish firms have borrowed in dollars and lira to take advantage of lower interest rates. But the sell-off has increased the cost of servicing that debt, particularly for companies whose revenues are solely in lira.

Turkey has the highest foreign exchange-denominated debt among emerging markets, Societe Generale said in its note on Friday, estimating its short-term external debt at $180 billion and total external debt at $460 billion.

The crisis is also threatening efforts by Turkish banks to refinance syndicated loans. The currency crisis escalated shortly after banks embarked on their second biannual loan refinancing round in early August.

Reuters reported earlier this month that banks had also started to sell some project finance loans to foreign lenders, to free up cash as they face higher funding costs and pressure from Erdogan to lend more cheaply.

The president has remained defiant, calling on Turks to sell their gold and dollars for lira, describing the crisis as an “economic war”.

Despite that, foreign currency deposits held by local investors rose to $159.9 billion in the week to Aug. 10, from $158.6 billion a week earlier, central bank data showed on Thursday.

By In Cyprus
Previous articleTrump cancels military parade, says he will head to Paris
Next articleMagical nights under full moon at 3 archaeological sites