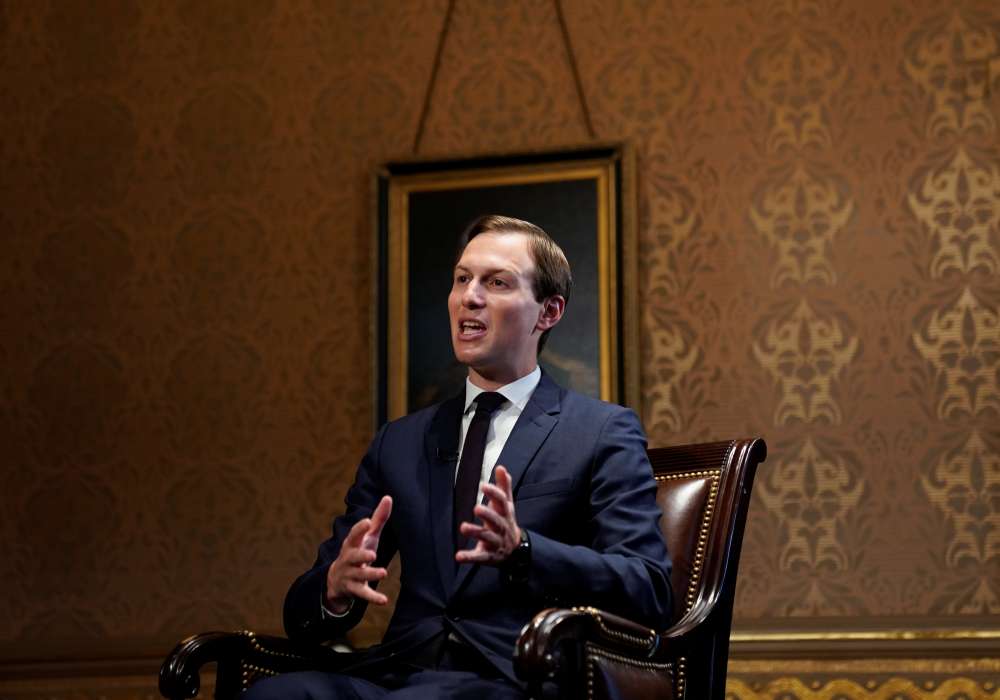 The Trump administration’s $50 billion Middle East economic plan calls for creation of a global investment fund to lift the Palestinian and neighbouring Arab state economies, and construction of a $5 billion transportation corridor to connect the West Bank and Gaza, according to U.S. officials and documents reviewed by Reuters.

The “economy first” approach toward reviving the moribund Israeli-Palestinian peace process could be a hard sell to a largely skeptical region. The plan, set to be presented by President Donald Trump’s son-in-law, Jared Kushner, at an international conference in Bahrain next week, includes 179 infrastructure and business projects, according to the documents.

More than half of the $50 billion would be spent in the economically troubled Palestinian territories over 10 years while the rest would be split between Egypt, Lebanon and Jordan. Some of the projects would be in Egypt’s Sinai peninsula, where investments could benefit Palestinians living in adjacent Gaza, a crowded and impoverished coastal enclave.

The plan also proposes nearly a billion dollars to build up the Palestinians’ tourism sector, a seemingly impractical notion for now given the frequent flareups between Israeli forces and militants from Hamas-ruled Gaza, and the tenuous security in the occupied West Bank.

The Trump administration hopes that other countries, principally wealthy Gulf states, and private investors, would foot much of the bill, Kushner told Reuters.

The unveiling of the economic blueprint follows two years of deliberations and delays in rolling out a broader peace plan between Israelis and Palestinians. The Palestinians, who are boycotting the event, have refused to talk to the Trump administration since it recognized Jerusalem as the Israeli capital in late 2017.

Kushner made clear in two interviews with Reuters that he sees his detailed formula as a game-changer, despite the view of many Middle East experts that he has little chance of success where decades of U.S.-backed peace efforts have failed.

“I laugh when they attack this as the ‘Deal of the Century’,” Kushner said of Palestinian leaders who have dismissed his plan as an attempt to buy off their aspirations for statehood. “This is going to be the ‘Opportunity of the Century’ if they have the courage to pursue it.”

Several Gulf Arab states, including Saudi Arabia, will also participate in the June 25-26 U.S.-led gathering in Bahrain’s capital, Manama, for Kushner’s rollout of the first phase of the Trump peace plan. Their presence, some U.S. officials say privately, appears intended in part to curry favor with Trump as he takes a hard line against Iran, those countries’ regional arch-foe.

The White House said it decided against inviting the Israeli government because the Palestinian Authority would not be there, making do instead with a small Israeli business delegation.

There are strong doubts whether potential donor governments would be willing to open their checkbooks anytime soon, as long as the thorny political disputes at the heart of the decades-old Palestinian conflict remain unresolved.

The 38-year-old Kushner – who like his father-in-law came to government steeped in the world of New York real estate deal-making – seems to be treating peacemaking in some ways like a business transaction, analysts and former U.S. officials say.

Palestinian officials reject the overall U.S.-led peace effort as heavily tilted in favor of Israel and likely to deny them a fully sovereign state of their own.

Kushner’s attempt to decide economic priorities first while initially sidestepping politics ignores the realities of the conflict, say many experts.

“This is completely out of sequence because the Israeli-Palestinian issue is primarily driven by historical wounds and overlapping claims to land and sacred space,” said Aaron David Miller, a former Middle East negotiator for Republican and Democratic administrations.

Kushner acknowledges that “you can’t push the economic plan forward without resolving the political issues as well.” The administration, he said, will “address that at a later time,” referring to the second stage of the peace plan’s rollout now expected no earlier than November.

Kushner says his approach is aimed at laying out economic incentives to show the Palestinians the potential for a prosperous future if they return to the table to negotiate a peace deal.

White House officials have played down expectations for Manama, which will put Kushner just across the Gulf from Iran at a time of surging tensions between Tehran and Washington.

Kushner, for instance, is calling it a “Prosperity to Peace workshop” instead of a conference, and a “vision” instead of an actual plan. He stressed that governments would not be expected to make financial pledges on the spot.

“It is a small victory that they are all showing up to listen and partake. In the old days, the Palestinian leaders would have spoken and nobody would have disobeyed,” he said.

Kushner’s proposed new investment fund for the Palestinians and neighbouring states would be administered by a “multilateral development bank.” Global financial lenders including the International Monetary Fund and World Bank plan to be present at the meeting.

A signature project would be to construct a travel corridor for Palestinian use that would cross Israel to link the West Bank and Gaza. It could include a highway and possibly a rail line. The narrowest distance between the territories, whose populations have long been divided by Israeli travel restrictions, is about 40 km (25 miles).

Kushner insists that if executed the plan would create a million jobs in the West Bank and Gaza, reduce Palestinian poverty by half and double the Palestinians’ GDP.

But most foreign investors will likely stay clear for the moment, not only because of security and corruption concerns but also because of the drag on the Palestinian economy from Israel’s West Bank occupation that obstructs the flow of people, goods and services, experts say.

Kushner sees his economic approach as resembling the Marshall Plan, which Washington introduced in 1948 to rebuild Western Europe from the devastation of World War Two. Unlike the U.S.-funded Marshall Plan, however, the latest initiative would put much of the financial burden on other countries.

Trump would “consider making a big investment in it” if there is a good governance mechanism, Kushner said. But he was non-committal about how much the president, who has often proved himself averse to foreign aid, might contribute.

Economic programmes have been tried before in the long line of U.S.-led peace efforts, only to fail for lack of political progress. Kushner’s approach, however, may be the most detailed so far, presented in two pamphlets of 40 and 96 pages each that are filled with financial tables and economic projections.

In Manama, the yet-to-released political part of the plan will not be up for discussion, Kushner said.

The economic documents offer no development projects in predominantly Arab east Jerusalem, which Palestinians want as the capital of their future state.

What Kushner hopes, however, is that the Saudis and other Gulf delegates will like what they hear enough to urge Palestinian President Mahmoud Abbas to consider the plan.

The message Kushner wants them to take to Ramallah: “We’d like to see you go to the table and negotiate and try to make a deal to better the lives of the Palestinian people.”

Palestinian officials fear that, even with all the high-priced promises, Kushner’s economic formula is just a prelude to a political plan that would jettison the two-state solution, the long-time cornerstone of U.S. and international peace efforts.