Trump vows ‘no concessions’ with Turkey over detained U.S. pastor 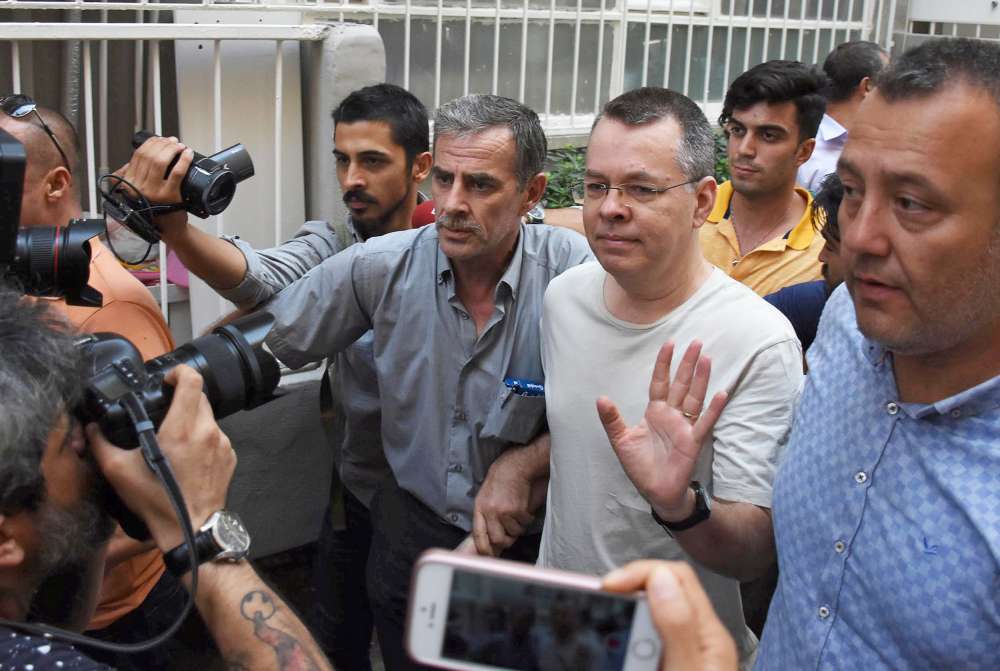 U.S. President Donald Trump on Monday ruled out agreeing to any demands from Turkey to gain the release of a detained American pastor and said he was not concerned that his tough stance could end up hurting European and emerging market economies.

In a wide-ranging Oval Office interview with Reuters, Trump complained about interest rate hikes by the Federal Reserve and suggested he was having second thoughts about Jerome Powell, his choice for Fed chair. He also said he “most likely” will have a second meeting with North Korean leader Kim Jong Un and indicated he would consider lifting U.S. sanctions on Russia if Moscow took some actions in return.

Trump said he thought he had a deal with Turkish President Tayyip Erdogan when he helped persuade Israel to free a detained Turkish citizen. He had thought Erdogan would then release pastor Andrew Brunson, who denies Turkey’s allegations that he was involved in a plot against Erdogan two years ago.

“I think it’s very sad what Turkey is doing. I think they’re making a terrible mistake. There will be no concessions,” he said.

Trump has imposed tariffs on imports of Turkish steel and aluminum in response to Erdogan’s refusal to free Brunson, raising concerns of economic damage in Europe and in emerging market economies.

Trump and Erdogan met in Brussels for a NATO summit in mid-July where they discussed Brunson’s case and what could be the way forward to release the pastor, a senior White House official said earlier.

Turkey had sought U.S. help to persuade the Israelis to release a Turkish woman who was being held in Israel, the senior official said. In exchange Turkey would release Brunson and other Americans being held in Turkey.

Trump said he kept his side of the bargain.

“I got that person out for him. I expect him to let this very innocent and wonderful man and great father and great Christian out of Turkey,” Trump said.

The dispute threatens to intensify a split between the United States and Turkey, a key NATO ally that plans to buy Russian missiles.

Israel, which confirmed that Trump had requested Ebru Ozkan’s release, deported her on July 15. Ankara has denied ever agreeing to free Brunson in return.

Trump drew a barrage of criticism at home and abroad after he stood side by side with Russian President Vladimir Putin at a July 16 summit in Helsinki and cast doubt on his own intelligence agencies’ findings that Russia meddled in the 2016 U.S. elections.

In the Reuters interview, he ticked off areas that he discussed privately with Putin, including security for Israel, Syria and Russia’s annexation of Crimea and incursion into eastern Ukraine, and the Nord Stream 2 pipeline from Russia to Germany that will supply natural gas to Germany.

Trump said Putin did not raise with him the issue of U.S. sanctions on Russia but that he would consider lifting them if Russia took steps on such areas as Syria or Ukraine.

“I would consider it if they do something that would be good for us. But I wouldn’t consider it without that,” he said.

Turning to Iran, Trump showed little interest in meeting Iranian President Hassan Rouhani to discuss the dispute over Iran’s nuclear program after earlier this month expressing a willingness to do so.

The Iranians, including Supreme Leader Ali Khamenei, have dismissed the offer. Trump said it did not matter to him whether he met Iran’s leaders and that there had been no U.S. outreach toward Iran to discuss talks.

Trump’s withdrawal of the United States from the nuclear deal between Iran and world powers earlier this year has raised tensions between Washington and Tehran.

“If they want to meet that’s fine, and if they don’t want to meet, I couldn’t care less,” he said.

Trump cast doubt on whether he will meet Chinese President Xi Jinping during an international Asia-Pacific summit in Papua New Guinea in November. Trump again talked up the warmth of his relationship with Xi, but said little progress has been made on his drive to rebalance the U.S.-Chinese trade relationship.

“Maybe. I’m not sure that it’s been set up yet. We’ll see,” he said, when asked about a possible meeting with Xi.

He also said he had “no time frame” for resolving his administration’s trade dispute with China.

By In Cyprus
Previous article
At least 11 dead in surge of white-water creek in Italy
Next article
Arrest warrant issued for kindergarten fire; gun found