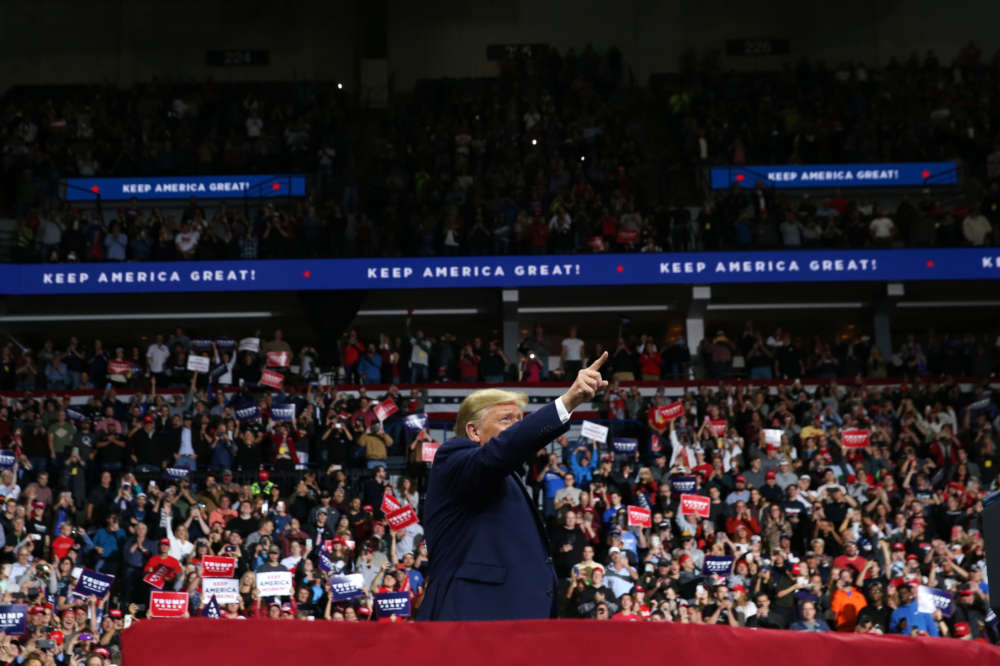 U.S. President Donald Trump on Thursday used a campaign rally to blast the impeachment inquiry against him as a brazen attempt by Democrats to overthrow him, vowing the attempt to remove him from office would backfire.

Supporters of the Republican president packed the 20,000-seat Target Center in Minneapolis for the first of three campaign rallies scheduled for the next week, with stops in Louisiana on Friday and Dallas in a week.

Trump said the impeachment drama will drive up his support ahead of the November 2020 election and help him win re-election for another four-year term.

“The Democrats’ brazen attempt to overthrow the government will produce a backlash at the ballot box the likes of which they have never ever seen before in the history of this country,” Trump said to cheers.

He called Hunter Biden “a loser” and wondered aloud how he “got $1.5 billion.” Trump and his personal lawyer Rudy Giuliani have repeatedly called the Bidens corrupt without providing any evidence.

Trump also sharply criticized Democratic Representative Ilhan Omar of Minnesota, repeating an allegation that she had expressed sympathy of al Qaeda and has been responsible for anti-Semitic rhetoric. Omar, a leading critic of Trump in the House, has rejected similar allegations previously made against her by Trump.

“How do you have such a person representing you in Minnesota,” said Trump. “I”m very angry at you people right now. She is a disgrace to our country.”

Trump returned to the subject of impeachment repeatedly during his speech, saying: “Democrats are on a crusade to destroy our democracy. We will never let it happen. We will defeat them.”

Trump’s son, Eric Trump, warmed up the crowd by attacking Hunter Biden for his ties to Ukraine’s energy industry while his father was vice president. He suggested Trump’s 2016 “lock her up” campaign cry against then-Democratic presidential candidate Hillary Clinton should be applied to Hunter Biden.

“Maybe ‘lock her up’ goes to ‘lock him up,'” the younger Trump said.

Vice President Mike Pence also spoke, denouncing Democrats for pursuing “partisan politics” and trying to “overturn the will of the American people.”

“We stand with Donald Trump,” he said.

Trump’s appearance in Minnesota was aimed at trying to pluck away the state from Democratic hands. He lost Minnesota narrowly to Clinton in 2016 and, bidding to expand his electoral chances in 2020, made his stop to try to build his support in the state.

While the energy inside the arena was electric with Trump supporters cheering and waving signs, it was unclear what a prolonged impeachment drama might do to Trump’s level of support.

Opinion polls show an increasing number of Americans think he should be impeached, but his Republican base has largely stuck by his side.

Outside the arena on a rainy night, thousands of protesters lined the streets, many holding signs calling for Trump’s impeachment or calling for him to be locked up. The crowds broke out in chants of “lock him” and “impeach him.”

One protester, geologist Aubrey Lee, 36, said Trump needs to be impeached because he does not represent America’s values anymore, from national security to equal rights.

“I am ecstatic about the impeachment inquiry and can’t wait to see him impeached. It’s long overdue,” Lee said.

Trump’s path to re-election depends on clinching a cluster of farm and Rust Belt states decided by slim margins in 2016, including Minnesota. No Republican presidential candidate has won Minnesota since Richard Nixon in 1972.