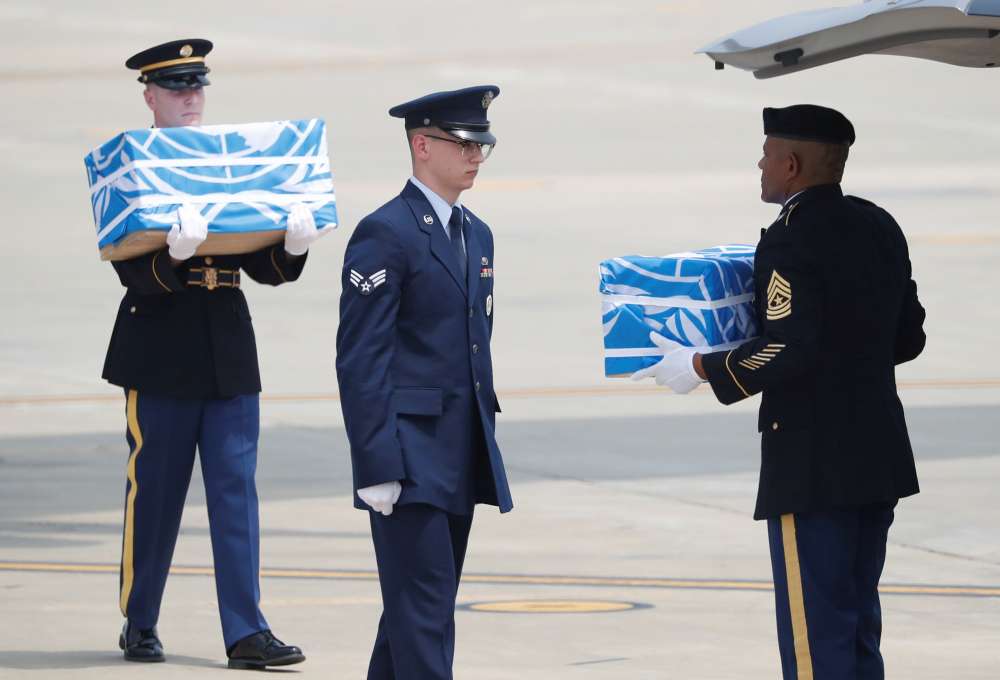 North Korea transferred 55 small, flag-draped cases carrying the suspected remains of U.S. soldiers killed in the Korean War on Friday, officials said, a first step in implementing an agreement reached in a landmark summit in June.

The repatriation of the remains missing in the 1950-53 conflict is seen as a modest diplomatic coup for U.S. President Donald Trump as it was one of the agreements reached during his meeting with North Korean leader Kim Jong Un in Singapore aimed primarily at securing the denuclearisation of the North.

“After so many years, this will be a great moment for so many families. Thank you to Kim Jong Un,” Trump wrote on Twitter.

A White House statement earlier said: “We are encouraged by North Korea’s actions and the momentum for positive change.”

A U.S. military transport plane flew to an airfield in North Korea’s northeastern city of Wonsan to bring the remains to Osan air base in South Korea, the White House statement said.

Soldiers in dress uniforms with white gloves were seen slowly carrying 55 small cases covered with the blue-and-white U.N. insignia, placing them one by one into silver vans waiting on the tarmac in Osan.

Straight-backed officers looked on next to the flags of the United States, South Korea and the United Nations.

A formal repatriation ceremony would be held at Osan on Wednesday, the White House said.

The remains would then be flown to Hawaii for further processing under the U.S. Defense POW/MIA Accounting Agency, the U.N. Command said in a statement.

The transfer of the remains coincided with the 65th anniversary of the 1953 armistice that ended fighting between North Korean and Chinese forces on one side and South Korean and U.S.-led forces under the U.N. Command on the other. The two Koreas are technically still at war because a peace treaty was never signed.

Kim paid tribute to the North’s Korean War “martyrs” and to Chinese soldiers killed in the conflict, state media said.

More than 7,700 U.S. troops who fought in the Korean War remain unaccounted for, with about 5,300 of those lost in what is now North Korea.

The pledge to transfer war remains was seen as a goodwill gesture by Kim at the June summit and, while it has taken longer than some U.S. officials had hoped, the handover will rekindle hopes for progress in nuclear talks.

Kim committed in a broad summit statement to work towards denuclearisation but Pyongyang has offered no details.

South Korea welcomed the return of the remains, calling it “meaningful progress that could contribute to fostering trust” between Pyongyang and Washington.

The two Koreas agreed to hold general-level military talks on Tuesday to discuss ways to implement their own summit in April in which they vowed to defuse tensions, Seoul’s defence ministry said on Friday.

The plan comes amid a thaw in relations between the two Koreas and days after the South pledged to reduce guard posts and equipment along the demilitarised zone on its border with the North.

Pyongyang has renewed calls for a declaration of the end of the Korean War, calling it the “first process for peace” and an important way Washington can add heft to security guarantees it has pledged in return for North Korea giving up its nuclear weapons.

The U.S. State Department says Washington is committed to building a peace mechanism to replace the armistice when North Korea has denuclearised.

U.S. Secretary of State Mike Pompeo told a Senate hearing on Wednesday North Korea was continuing to produce fuel for nuclear bombs despite of its pledge to denuclearise, even as he argued that the United States was making progress in talks with Pyongyang.

Pompeo said North Korea had begun to dismantle a missile test site, something Kim also promised in Singapore, and called it “a good thing, steps forward”. However, he said Kim needed to follow through on his summit commitments to denuclearise.

The U.N. Security Council has unanimously boosted sanctions on North Korea since 2006 in a bid to choke off funding for Pyongyang’s nuclear and ballistic missile programmes, banning luxury goods said to include recreational sports equipment.

The United States has blocked a request by the International Olympic Committee to transfer sports equipment to North Korea so its athletes can participate in the Olympic Games, United Nations diplomats said on Thursday.

Before Friday’s transfer of remains, the United States and North Korea had worked on so-called joint field activities to recover Korean War remains from 1996-2005. Washington halted those operations, citing concerns about the safety of its personnel as Pyongyang stepped up its nuclear programme.

More than 400 caskets of remains found in North Korea were returned to the United States between the 1990s and 2005, with the bodies of some 330 other Americans also accounted for, according to the Defense POW/MIA Accounting Agency.

Pentagon officials have said discussions with North Korea have included resuming field operations in the North to recover remains.

The programme helped bring in vital hard currency to North Korea, which has been under U.S.-led sanctions for decades. However, reviving it could complicate U.S. efforts to persuade countries around the world to maintain economic pressure on Pyongyang over its ballistic and nuclear programmes.