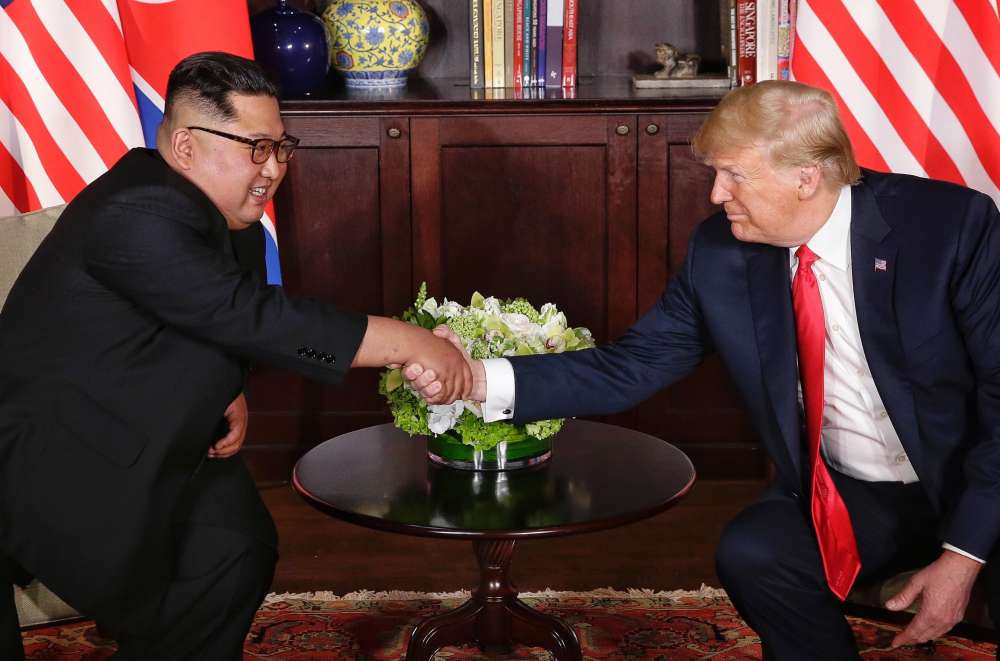 US President Donald Trump said he had forged a “good relationship” with North Korean leader Kim Jong Un at the start of a historic summit in Singapore on Tuesday, as the two men sought ways to end a nuclear standoff on the Korean peninsula.

Kim said the meeting was “a good prelude to peace”, but there was no immediate word on any substantive progress in their discussions.

Should they succeed in making a diplomatic breakthrough, it could bring lasting change to the security landscape of Northeast Asia, like the visit of former US President Richard Nixon to China in 1972 led to the transformation of China.

Both men had looked serious as they got out of their limousines for the summit at the Capella hotel on Singapore’s Sentosa, a resort island with luxury hotels, a casino, manmade beaches and a Universal Studios theme park.

But, with cameras of the world’s press trained on them, they displayed an initial atmosphere of bonhomie as they met.

Inside, they sat alongside each other against a backdrop of North Korean and US flags, with Kim beaming broadly as the US president gave him a thumbs up.

The combatants of the 1950-53 Korean War are technically still at war, as the conflict, in which millions of people died, was concluded only with a truce.

“We overcame all kinds of scepticism and speculations about this summit and I believe that this is good for the peace,” he said. “I believe this is a good prelude for peace.”

Financial markets were largely steady in Asia and did not show any noticeable reaction to the start of the summit. The dollar was at a three-week high and the MSCI index of Asia-Pacific shares was largely unchanged from Monday.

While Trump and Kim search each other’s eyes and words for signs of trust or deceit, the rest of the world will be watching, hoping that somehow these two unpredictable leaders can find a way to defuse one of the planet’s most dangerous flashpoints.

A body language expert said both men tried to project command as they met, but also displayed signs of nerves.

After the meetings, the two teams met for a working lunch, where beef short ribs, sweet and sour pork and “Daegu Jormin”, or Korean braised cod, were served for the main course, according to the menu. That was to be followed by dark chocolate tarts, pastries and vanilla ice cream for dessert.

Officials of the two sides held last-minute talks to lay the groundwork for the summit of the old foes, an event almost unthinkable just months ago, when they were exchanging insults and threats that raised fears of war.

Staff-level meetings between the United States and North Korea were going “well and quickly,”Trump said in a message on Twitter on Tuesday.

But he added: “In the end, that doesn’t matter. We will all know soon whether or not a real deal, unlike those of the past, can happen!”

Pompeo said earlier the summit should set the framework for “the hard work that will follow”, insisting that North Korea had to move toward complete, verifiable and irreversible denuclearisation.

Kim is due to leave on Tuesday afternoon, a source involved in the planning of his visit has said.

One of the world’s most reclusive leaders, Kim visited Singapore’s waterfront on Monday, smiling and waving to onlookers, adding to a more affable image that has emerged since his April summit with South Korean leader Moon Jae-in.

By In Cyprus
Previous articleEx-Trump campaign aide Manafort to be arraigned on new charges Friday
Next articleUpdate: Two arrests after shots fired at man trying to steal hunting dogs