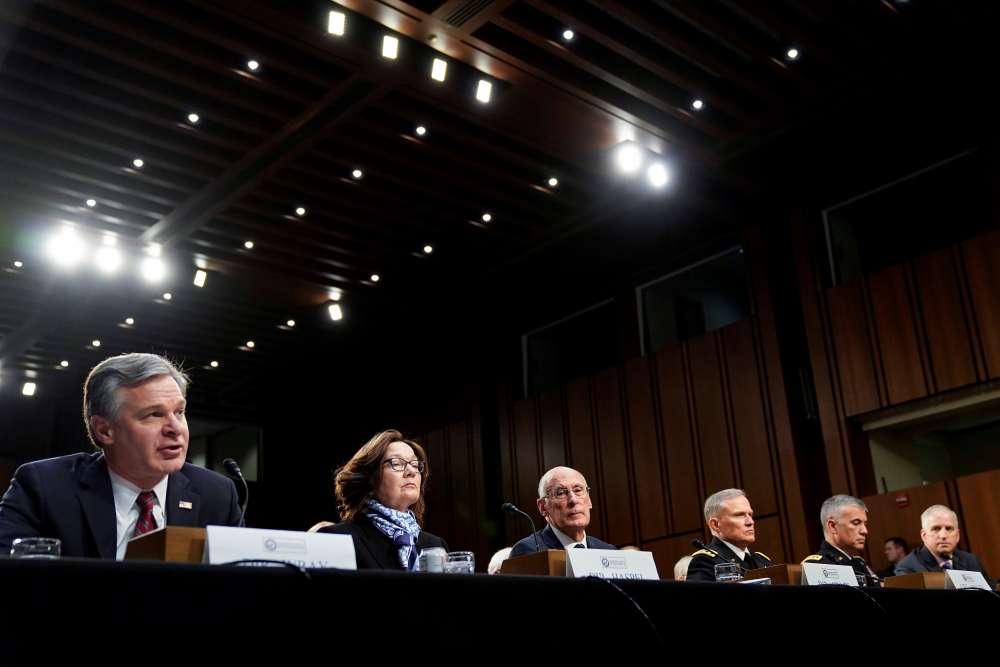 – President Donald Trump on Wednesday called top U.S. intelligence chiefs “extremely passive and naive” on Iran and dismissed their assessments of the threat posed by North Korea a day after they contradicted his views during congressional testimony.

Leaders of the U.S. intelligence community told a Senate committee on Tuesday that the nuclear threat from North Korea remained but that Iran was not taking steps toward making a nuclear bomb, differing with Trump’s views on those countries.

“The Intelligence people seem to be extremely passive and naive when it comes to the dangers of Iran. They are wrong!” Trump said in a Twitter post.

The Republican president said Iran was “coming very close to the edge” and suggested. “Perhaps Intelligence should go back to school!”

Trump last year pulled out of an international nuclear deal with Iran put in place under his Democratic predecessor Barack Obama and re-imposed sanctions on Tehran.

The U.S. intelligence officials told the Senate Intelligence Committee Iran was not developing nuclear weapons in violation of the 2015 nuclear agreement, even though Tehran threatened to reverse some commitments after Trump pulled the United States of the deal.

Their assessments also broke with other assertions by Trump, including on the threat posed by Russia to U.S. elections, the threat that the Islamic State militant group poses in Syria and North Korea’s commitment to denuclearize.

Trump has clashed with leaders of the U.S. intelligence community, most strikingly in disputing their finding that Russia intervened in the 2016 U.S. election to help him win the presidency.

Trump has invested heavily in improving relations with North Korea in hopes of getting the reclusive communist nation to abandon its nuclear ambitions. He broke with decades of U.S. policy when he agreed to meet with North Korean leader Kim Jong Un last June and has planned a second summit in February.

“North Korea relationship is best it has ever been with U.S. No testing, getting remains, hostages returned. Decent chance of Denuclearization,” Trump said in a Twitter post, drawing a comparison to the “horrendous” relationship under Obama.

However, Director of National Intelligence Dan Coats and CIA Director Gina Haspel told lawmakers Pyongyang viewed its nuclear program as vital to the country’s survival and was unlikely to give it up.

A number of North Korea analysts agree. “There is absolutely no reason or sufficient incentives for North Korea to give up its nuclear weapons. North Korea wants to play Trump and get sanctions off its back,” said Srinivasan Sitaraman, a political science professor at Clark University in Massachusetts.

Trump also defended his decision to withdraw 2,000 U.S. troops from Syria on grounds that Islamic State no longer poses a threat, saying “we’ve beaten them.”

“Caliphate will soon be destroyed, unthinkable two years ago,” Trump said on Twitter.

Trump has given the U.S. military about four months to withdraw the troops in Syria, backtracking from his abrupt order last month that the military pull out within 30 days.

The U.S. spy chiefs said Islamic State would continue to pursue attacks from Syria and Iraq against regional and Western adversaries, including the United States.

Intelligence committee member Senator Angus King, an independent who caucuses with Democrats, told CNN, “It’s still disturbing that the president doesn’t seem to want to listen to the people whose job it is to give him this information.