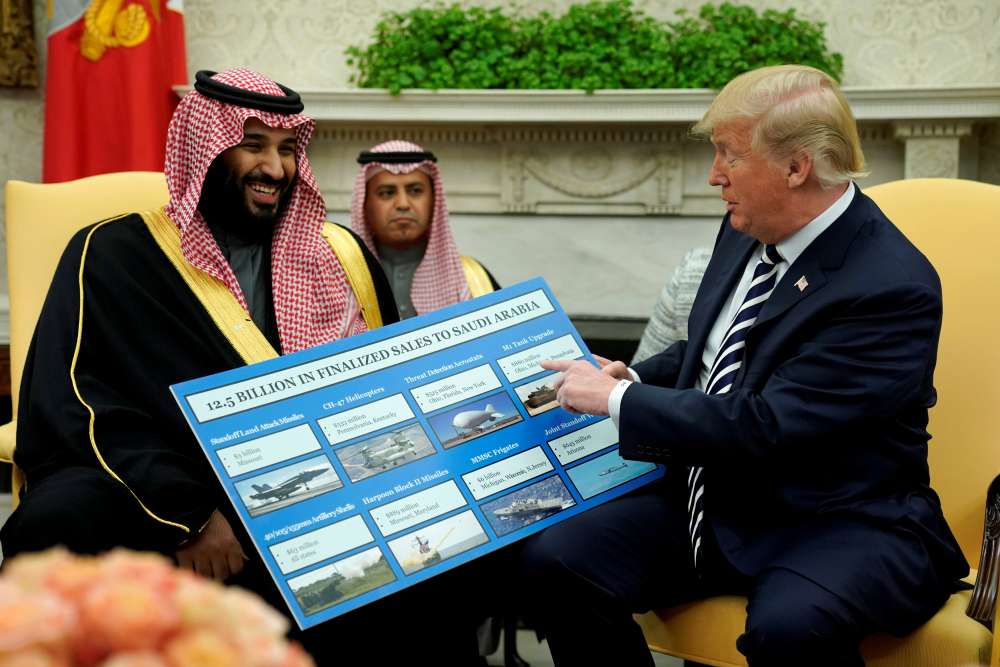 U.S. President Donald Trump on Tuesday defended Saudi Arabia from what he characterized as efforts to condemn Riyadh over the disappearance of journalist Jamal Khashoggi before all the facts were known, telling the Associated Press in an interview it was a case of “guilty until proven innocent.”

“I think we have to find out what happened first,” Trump told the Associated Press in an interview on Tuesday. “Here we go again with, you know, you’re guilty until proven innocent. I don’t like that.”

Trump then referred directly to his nomination of Brett Kavanaugh to the U.S. Supreme Court, which ran into trouble in the Senate after several women came forward to accuse Kavanaugh of sexual misconduct, before Kavanaugh was ultimately confirmed.

Earlier, in a Twitter post, Trump said that Saudi Arabian Crown Prince Mohammed bin Salman denied knowing what happened in the Saudi consulate in Istanbul where Khashoggi vanished two weeks ago after going there to collect documents he needed for his planned marriage.

Turkish officials have said they believe the Saudi journalist was murdered and his body removed, which the Saudis have strongly denied. Khashoggi was a U.S. resident who wrote columns for the Washington Post and he was critical of the Saudi government, calling for reforms.

“Just spoke with the Crown Prince of Saudi Arabia who totally denied any knowledge of what took place in their Turkish Consulate,” Trump wrote on Twitter. Trump also wrote that the crown prince “told me that he has already started, and will rapidly expand, a full and complete investigation into this matter. Answers will be forthcoming shortly.”

How the crown prince, often referred to as MbS, emerges when the dust settles over Khashoggi’s disappearance is a test of how the West will deal with Saudi Arabia in the future. At issue will be to what extent the West believes responsibility lies with MbS for Khashoggi.

MbS, who has enjoyed a close relationship with the Trump administration, painted himself as the face of a new, vibrant Saudi Arabia, diversifying its economy away from reliance on oil and making some social changes.

But there has been mounting criticism of some of the prince’s moves.

These include Riyadh’s involvement in the war in Yemen, the arrest of women activists and a diplomatic dispute with Canada. The kingdom also denied an assertion by France that it held Lebanese Prime Minister Saad al-Hariri captive in November 2017.

Despite Western concerns about Saudi Arabia’s human rights record, Trump still says he is unwilling to pull out of weapons sales agreements with Riyadh.

Also, U.S. Treasury Secretary Steven Mnuchin plans to attend a high-profile investment conference in Riyadh starting on Oct. 23. Those are all indications Trump is sticking by Saudi Arabia, the first country he visited as president in 2017. Trump told the AP that Mnuchin’s trip could be canceled by Friday depending on what the investigation finds.

U.S. Secretary of State Mike Pompeo, who met with Saudi King Salman, the crown prince and the foreign minister, said his assessment from the meetings was that there was “a serious commitment to determine all the facts and ensure accountability, including accountability for Saudi Arabia’s senior leaders or senior officials.

Pompeo is due to travel to Turkey on Wednesday.

Pompeo and Trump’s remarks reflect a dilemma for the United States, Britain and other Western nations in how to respond to an authoritarian monarchy that does not typically bow to foreign pressures. Saudi Arabia is the world’s top oil exporter, spends lavishly on Western arms and is a major Sunni Muslim ally.

U.S. Senator Lindsey Graham, a Republican close to Trump on some issues, called the crown prince a “toxic” figure, adding, “He can never be a world leader on the world stage.”

“I’ve been their biggest defender on the floor of the United States Senate,” Graham said. “This guy is a wrecking ball. He had this guy murdered in a consulate in Turkey and to expect me to ignore it, I feel used and abused,” Graham said.

The Group of Seven foreign ministers, including the United States, said in a statement that they remained “very troubled” by Khashoggi’s disappearance, and looked forward to Riyadh conducting a “thorough, credible, transparent and prompt investigation, as announced.”

The statement was unusual for a group that normally weighs in on global foreign policy issues and speaks generally about human rights abuses in other countries.

U.S. media outlets reported on Monday that Saudi Arabia will acknowledge that Khashoggi was killed in a botched interrogation.

Trump speculated on Monday that “rogue killers” could be behind the disappearance, but gave no evidence to back up that theory.

Members of the U.S. Congress, including some of Trump’s fellow Republicans, are among the loudest voices in the United States demanding answers and action on Khashoggi, who moved to Washington last year fearing retribution for his criticism of the crown prince.

Republican Representative Jeb Hensarling, outgoing chairman of the House of Representatives Financial Services Committee, said Washington might have to seriously review relations with Saudi Arabia if Riyadh was involved in killing Khashoggi.

“If this was a state-sanctioned assassination, which it may prove to be, then there will have to be a fundamental rethinking of our relationship vis-a-vis the Kingdom of Saudi Arabia. Absolutely,” Hensarling told Reuters.

Turkish President Tayyip Erdogan indicated that parts of the Saudi consulate in Istanbul had been repainted since Khashoggi’s disappearance.

“The investigation is looking into many things such as toxic materials and those materials being removed by painting them over,” Erdogan told reporters.

A Turkish security source said the search of the consulate provided “strong evidence” but no conclusive proof that Khashoggi was killed there.

The source confirmed that Saudi Consul General Mohammad al-Otaibi left Istanbul on Tuesday, returning to Riyadh. The source said Turkish authorities had not asked him to leave.

A search of the Saudi consul’s Istanbul residence was called off for the day because Saudi officials were not able to join, Turkish police said. Foreign Minister Mevlut Cavusoglu had said earlier on Tuesday that Turkish officials would extend their investigation into Khashoggi’s disappearance to include the residence of the Saudi consul and some vehicles.

Indicating unease over the Khashoggi case, international media and business executives have been pulling out of next week’s investment conference, known as “Davos of the desert.”

Saudi Arabia has said it would retaliate against any pressure or economic sanctions.

CNN reported on Monday that after denying for two weeks any role in Khashoggi’s disappearance, Saudi Arabia was preparing to say he died in a botched interrogation. The New York Times reported that Prince Mohammed had approved an interrogation or abduction of Khashoggi and the government would shield him by blaming an intelligence official.

Turkish authorities have an audio recording indicating that Khashoggi was killed in the consulate, Turkish sources have told Reuters.

By In Cyprus
Previous article
Barcelona to distance Ronaldinho, Rivaldo after Bolsonaro support
Next article
Cyprus and Egypt willing to upgrade their defence cooperation