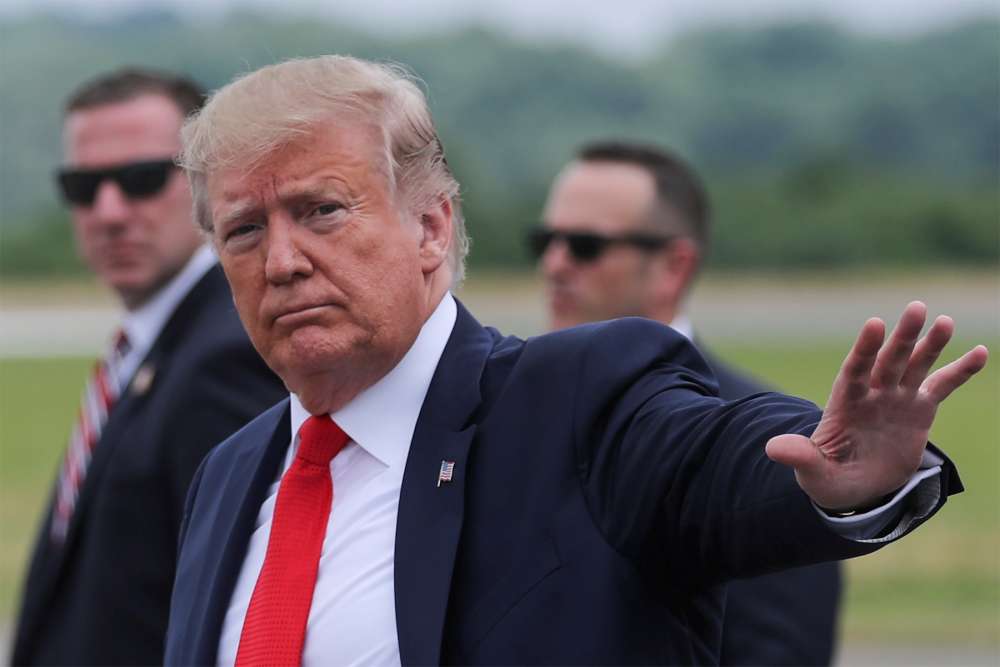 U.S. President Donald Trump lashed out at “foolish” British Prime Minister Theresa May and her “wacky” Washington ambassador on Tuesday, stepping up a tirade against a close ally whose envoy had branded his administration inept.

May has given her full support to Washington envoy Kim Darroch after a series of memos in which he described Trump’s administration as “dysfunctional” and “diplomatically clumsy and inept” were leaked to a British newspaper on Sunday.

While ministers and May’s spokesman have stated the leaked cables were only a partial reflection of Darroch’s assessments and did not reflect the government’s views, they have infuriated Trump who fired off a second series of scathing tweets.

“The wacky Ambassador that the UK foisted upon the United States is not someone we are thrilled with, a very stupid guy,” Trump wrote, describing Darroch as a “pompous fool”.

“He should speak to his country, and Prime Minister May, about their failed Brexit negotiation, and not be upset with my criticism of how badly it was handled. I told @theresa_may how to do that deal, but she went her own foolish way – was unable to get it done. A disaster!”

May is due to leave office before the end of the month and has previously clashed with Trump over a number of issues from Muslim relations to the 2015 Iran nuclear deal.

However, the timing of the discord comes as Britain is hoping to strike a major trade deal with its closest ally after it leaves the European Union, an exit scheduled for Oct. 31.

The two contenders to replace May, former London mayor Boris Johnson and foreign minister Jeremy Hunt, have both indicated they could support leaving the EU without a deal, making a future agreement with the United States even more important.

Johnson, the favourite to be the next British leader, hinted that he shared Trump’s view of May’s handling of Brexit and said the United States would remain Britain’s top military and political partner.

“I’ve got a good relationship with the White House and have no embarrassment in saying that,” he told BBC TV. “I myself have said some pretty critical things about the Brexit negotiations so far.”

Britain’s trade minister Liam Fox said he would apologise to Trump’s daughter Ivanka whom he was due to meet during a visit to Washington this week. Darroch was due to attend that meeting but had now pulled out, the BBC reported.

On Monday, Trump had tweeted that he would no longer deal with the diplomat and that it was “good news” that Britain would soon have a new prime minister.

Before Trump’s latest broadside, May’s spokesman said Darroch would stay in place with the government’s full support and that envoys had to feel confident they could share their frank assessments.

“She (May) said we had made clear to the U.S. how unfortunate this leak is, and that the extracts were selective and do not reflect the closeness of our relationship,” May’s spokesman said.

In his confidential memos dating from 2017 to the present, Darroch had said reports of in-fighting in the White House were “mostly true” and last month described confusion within the administration over Trump’s decision to call off a military strike on Iran.

British officials have launched an inquiry to find out who was responsible for the leak and foreign minister Hunt promised “serious consequences” for whoever was responsible.

He told the Sun newspaper that the inquiry would consider whether the memos had been obtained by hacking by a hostile state, although he said he had seen no evidence for this.

Christopher Meyer, a former British ambassador to Washington, said there was a “possible range of villains”.

“It was clearly somebody who set out deliberately to sabotage Sir Kim’s ambassadorship, to make his position untenable and to have him replaced by somebody more congenial to the leaker,” he told BBC radio.

What to do with Darroch will be a major issue for Britain’s new prime minister to address, but former British foreign minister William Hague said he should not be removed.

He pointed out that no U.S. diplomats had been withdrawn from their roles after the mass release of secret U.S. cables by WikiLeaks in 2010 which included highly critical appraisals of world leaders.

“You can’t change an ambassador at the demand of a host country. It is their job to give an honest assessment of what is happening in that country,” Hague told BBC radio.

By In Cyprus
Previous articlePower outages in Strovolos
Next articleCyprus trade deficit rises by 6.22% in January – April 2019