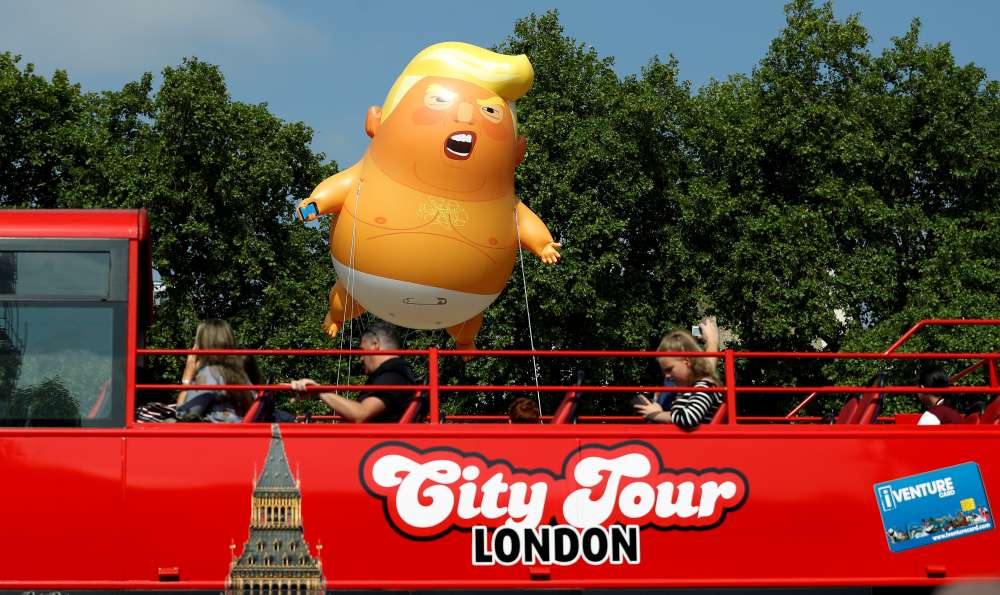 The “Trump Baby” inflatable balloon that was the focus of protests when the U.S. president visited London last year will fly again this week when he returns for state visit including a lavish banquet hosted by the queen, activists said.

The team behind the blimp said on Sunday it would be flown at locations near Donald Trump throughout his visit, after a crowdfunding campaign raised a target of 30,000 pounds ($38,000) for groups backing causes from climate action to women’s rights.

This six-metre high blimp, which depicts Trump as a snarling, diaper-wearing orange baby, became a rallying symbol for hundreds of thousands of anti-Trump protesters, who packed central London during his previous trip.

“Trump will try his best to avoid the public on his trip, but with Trump Baby flying we’re sending a very clear message of solidarity to those affected by his despicable politics,” said Ajuub Faraji, one of the organisers who label themselves Trump blimp “Babysitters”.

Trump and his wife Melania are due in Britain on June 3-5 for a state visit – a pomp-laden affair involving a banquet at Buckingham Palace. The invitation comes from Queen Elizabeth although the decision was taken on her behalf by politicians.

It is the most prestigious welcome Britain can offer a dignitary, a step above last year’s official visit.

London Mayor Sadiq Khan, who gave approval to demonstrators to fly the blimp last year, strongly criticised the government’s decision to offer such a high honour to Trump this year.

It is “un-British to be rolling out the red carpet this week for a formal state visit for a president whose divisive behaviour flies in the face of the ideals America was founded upon – equality, liberty and religious freedom,” Khan wrote in the Observer newspaper.

Nigel Farage, a Trump ally and one of the leading campaigners to bring Britain out of the European Union, called the decision to allow the blimp last year “the biggest insult to a sitting U.S. president ever”.

While much of the British public is hostile to Trump, there have been calls to tone down protests against him during this visit, when he will attend observances of the 75th anniversary of the D-Day landing by U.S. and British forces on the beaches of Nazi-occupied France during World War Two.

“This is not, then, all about Donald Trump; it is about honouring a crucial offensive that helped bring an end to the war in Europe,” the Evening Standard newspaper wrote in an editorial, noting that for many surviving veterans it was the last major anniversary they would be able to attend. “The U.S. president is right to attend; whatever we think of Mr Trump, we should make him welcome for this important anniversary.”

By In Cyprus
Previous articleHot with dust to continue until Thursday
Next articleUpdated: Biker killed in Paralimni, third road fatality this weekend