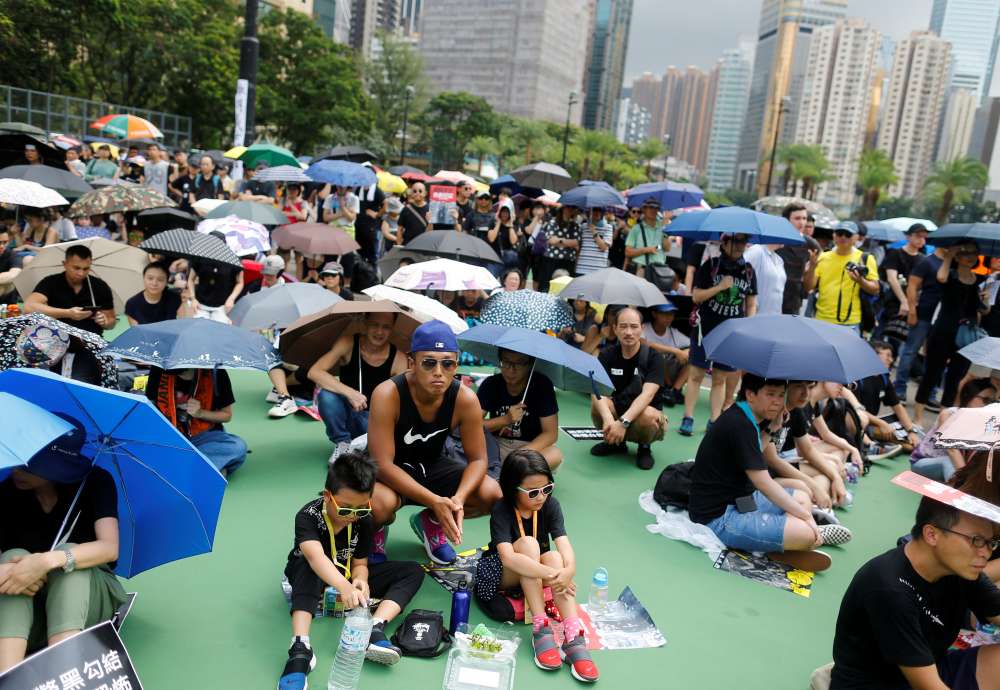 Thousands of Hong Kong protesters rallied on Sunday, defying a police ban on marches in the Chinese-controlled territory and continuing a restive weekend of demonstrations which saw police fire teargas overnight.

Anti-government protests took place in different locations across the Asian financial hub, including one at the city’s international airport for a third day.

Increasingly violent demonstration have plunged Hong Kong into its most serious political crisis for decades, posing a serious challenge to the central government in Beijing which has taken an increasingly tough line.

In the city’s Victoria Park, thousands of people including elderly and families with children braved sweltering heat to demand authorities listen to the public’s demands, particularly an independent inquiry into the government’s handling of the crisis and what they say is police brutality.

Police said on Sunday they had arrested 16 people during the protests on Saturday for charges including unlawful assembly and possession of an offensive weapon. Authorities have arrested over 600 people since the rallies began in June.

Jason Liu, a 29-year-old protester who works as an arborist making sure the city’s trees are healthy, said the police made him the most angry as they acted like enemies rather than protecting the people.

“But our main target is obviously the government. They didn’t respond to any of our requests.”

The former British colony of Hong Kong is roiling from months of protests that began against a proposed bill to allow people to be extradited to stand trial in mainland China and have developed into calls for greater democracy.

On Saturday, police fired volleys of teargas to disperse protesters after activists rallied across the city.

In the working class district of Sham Shui Po, over a thousand people, including middle aged and elderly marched to protest against the government. Many shops in the area were shuttered.

“We have lived in Hong Kong all our lives and this is the hardest time because the government is not listening to the citizens,” said a 63-year-old man surnamed Leung, who was accompanied by his 93-year-old father in a wheelchair.

There was no police presence at any of the demonstration points in the afternoon and the atmosphere remained jovial and calm, with people even bringing their dogs.

Authorities have not given permission for Sunday’s two protests planned in Sham Shui Po or North Point, but the rally at Victoria Park was permitted.

China has said the central government would not sit idly by and let the situation continue. Hong Kong’s government has also said the violence and illegal protests were pushing the city to an extremely dangerous edge.

The airline told staff on Saturday it would bar any “overly radical” employees from crewing flights to the mainland and said it had removed a pilot who was arrested at protests last week from duty.

China has shown strong support for the city’s police force with state news agency Xinhua on Sunday stating that 245 representatives from Hong Kong Federation of Fujian Associations met on Saturday in the city’s North Point area to show their support for police.

Young people have been at the forefront of recent protests, worried about the erosion of freedoms in Hong Kong, while also concerned with issues such as wealth disparities in the city.

Elderly people have also been appearing. On Saturday in two separate protests, small groups of elderly Hong Kongers and families marched near the financial centre’s business districts. Both marches and the airport protests were peaceful.

Several leisure and public facilities have planned to close on Sunday afternoon when the protests are expected.

“I don’t care if it is legal or illegal,” said 18 year old university student Polly.” We have so many people on our side.”

By In Cyprus
Previous articleForestry Department on red alert against fires (video)
Next articleHere come the Perseids; meteor shower to peak August 11-13