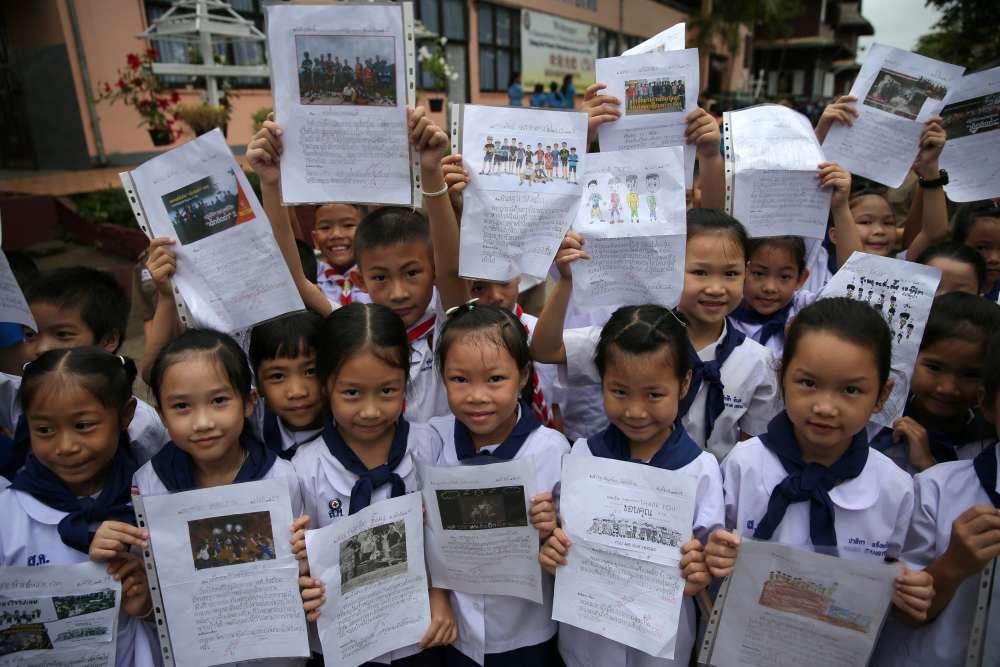 The 12 boys and their soccer coach rescued from inside a flooded Thai cave lost an average of 2 kg during their 17-day ordeal but were generally in good condition and showed no signs of stress, a senior health official said on Wednesday.

Thais reacted with relief, gratitude and exhilaration after the last group of the “Wild Boars” soccer team was rescued from the Tham Luang cave, near the border with Myanmar, on Tuesday night, ending an ordeal that gripped Thailand and the world.

They were taken by helicopter to a hospital about 70 km away to join their team mates in quarantine for the time being.

“From our assessment, they are in good condition and not stressed. The children were well taken care of in the cave. Most of the boys lost an average of 2 kg,” Thongchai Lertwilairattanapong, an inspector for Thailand’s health department, told reporters.

Parents of the first four boys freed on Sunday have been able to visit them but had to wear protective suits and stand 2 metres  away as a precaution.

Thongchai said one from the last group rescued on Tuesday had a lung infection and they were all given vaccinations for rabies and tetanus.

The group ventured into the vast cave complex in northern Thailand after soccer practice on June 23 and were lost for nine days before they were discovered by British divers.

Getting them out – which involved teaching boys as young as 11 who were not strong swimmers to dive through narrow, submerged passages – proved a monumental challenge. A former Thai Navy SEAL died during a mission in the cave on Friday.

“Hooyah! Mission accomplished,” read one headline, echoing the rallying cry of the Thai navy SEALs involved in the rescue.

The hashtag #Hooyah was also hugely popular with Thai netizens wanting to show their support for the hundreds of rescuers, including divers from around the world, who helped to get the boys out.

Thai Prime Minister Prayuth Chan-ochra made a televised statement thanking everyone involved in the mission who “shared their expertise, manpower and equipments”.

A senior Australian police officer acknowledged the degree of international cooperation “in a very unfriendly environment”.

“It is amazing what the human being can do. There are extraordinary people doing extraordinary things,” Glenn McEwan, the Australian Federal Police’s Asia manager, told reporters in Chiang Rai.

” … We are humbled to have been a part of it. Returning the Wild Boar soccer team safely into the arms of their loved ones is the good news of the year,” he said.

Audiences around the world cheered the team’s successful rescue after the saga generated messages of help, prayers and – finally – expressions of relief.

The drama in Thailand has even resonated as far as Russia, where soccer’s World Cup is reaching its final stages. Players from France and England welcomed news of the rescue and sent their best wishes to the “Wild Boars” on Twitter.

“This victory goes to the heroes of the day, well done boys, you are so strong,” French midfielder Paul Pogba tweeted after his team beat Belgium 1-0 on Tuesday to reach the final.

Manchester City and England defender Kyle Walker, whose team faces Croatia in the second semi-final later on Wednesday, said he wanted to send shirts to the boys.

“Amazing news that all of the Thai kids are out of the cave safely!” Walker tweeted.

Araya Hargate, one of Thailand’s top actresses and a L’Oreal cosmetics brand ambassador, shared a cartoon of the boys surrounded by rescuers on her Instagram page, which has 7.9 million followers.

“After all … the world is not such a bad place #humanityfaithrestored #thailandcaverescue,” the actress, known in Thailand as “Chompoo”, wrote.

Australian Prime Minister Malcolm Turnbull praised the courage of the multinational rescue team, which was run by the Thai military, as “one of the most heroic and inspiring episodes of our time”.