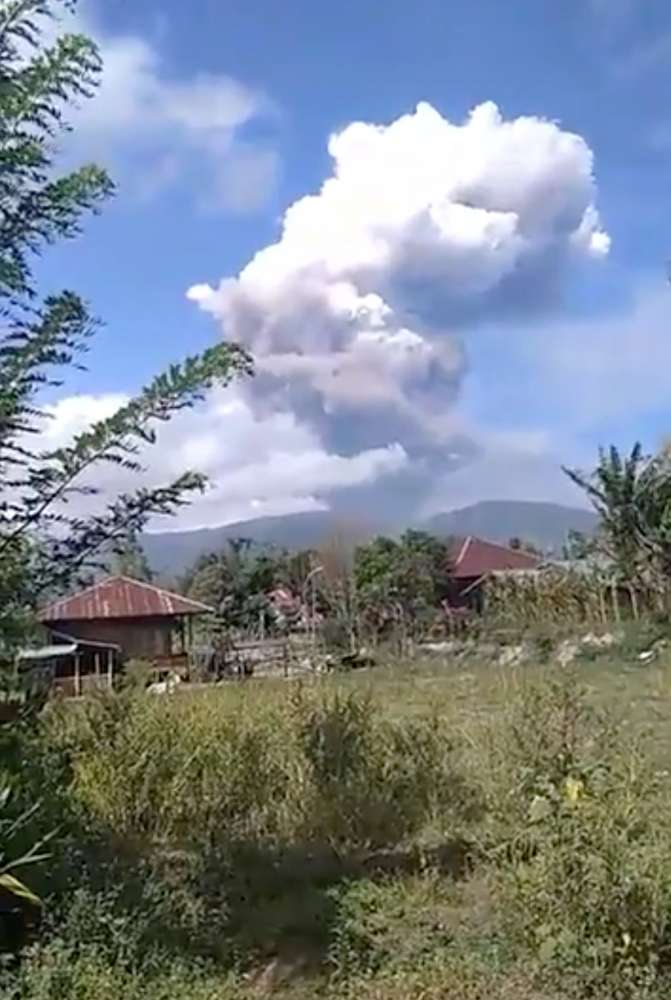 A volcano has erupted on the Indonesian island hit by an earthquake and tsunami five days ago, Sky reported today.

A government volcanologist said he suspects the eruption was triggered by last Friday’s 7.5-magnitude earthquake, which also created a tsunami and has killed 1,407 people – with the number rising daily.

Authorities warned planes about volcanic ash in the air, a day after the first air evacuations from Central Sulawesi, about 585 miles (940km) southwest of the volcano, took place following the nearby earthquake.

Aid planes have also just started to be able to get to Palu, the city most badly hit by the tsunami.

The volcano’s eruption status was raised from an alert to standby 2.5 miles (4km) from the summit and up to four miles (6.5km) to the west-southwest.

Standby status means people should avoid the area nearest the volcano and have masks available in case of ash fall.

The Indonesian archipelago has dozens of active volcanoes as it is on the Pacific Ring of Fire.

It is the first time he has visited the area since the quake hit five days previously, with the government heavily criticised for a lack of disaster planning as residents in and around Palu have struggled to get food, water or medical aid for days.

Many villages have been cut off by landslides caused by the earthquake, with the number of deaths expected to rise even further over the coming days.

Mr Widodo said: “Logistics are in and continue to spread, there are places that we haven’t reached.

“I’ve instructed the governor to recommend the markets to be re-opened, we want to start reviving the economy.”

As aid began trickling in, residents in one neighbourhood clapped, cheered and high-fived the arrival of a supply truck.

But aid is yet to reach the hardest-hit areas outside Palu as the UN humanitarian office said people urgently require shelter, clean water, food, fuel and emergency medical care.

Indonesia’s military chief said soldiers and other forces have been deployed to Palu to guard any remaining key infrastructure, fuel depots and the airport – which was badly damaged – to stop any looting attempts.

Police in the city had not been arresting looters desperate for food and water until Tuesday when other items such as computers were stolen.

By In Cyprus
Previous article
Update: Instagram back up after worldwide outage
Next article
Kidnap case file submitted to AG