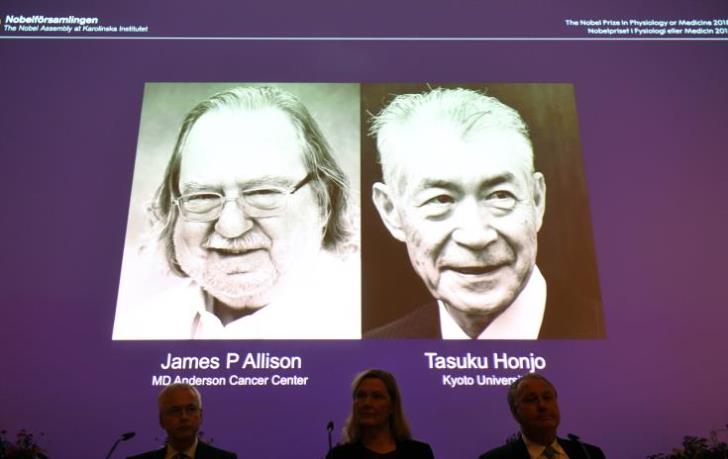 American James Allison and Japanese Tasuku Honjo won the 2018 Nobel Prize for Physiology or Medicine on Monday for game-changing discoveries about how to harness and manipulate the immune system to fight cancer.

The scientists’ work in the 1990s has since swiftly led to new and dramatically improved therapies for cancers such as melanoma and lung cancer, which had previously been extremely difficult to treat.

“The seminal discoveries by the two Laureates constitute a landmark in our fight against cancer,” the Nobel Assembly at Sweden’s Karolinska Institute said as it awarded the prize of nine million Swedish crowns ($1 million).

“Allison and Honjo showed how different strategies for inhibiting the brakes on the immune system can be used in the treatment of cancer,” it said.

The treatments, often referred to as “immune checkpoint therapy”, have “fundamentally changed the outcome for certain groups of patients with advanced cancer”, it added.

Medicine is the first of the Nobel Prizes awarded each year. The prizes for achievements in science, literature and peace were created in accordance with the will of dynamite inventor and businessman Alfred Nobel and have been awarded since 1901.

The literature prize will not be handed out this year after the awarding body was hit by a sexual misconduct scandal.

Allison and Honjo’s work had both worked on proteins that act as brakes on the immune system – preventing the body and its main immune cells, known as T-cells, from attacking tumour cells effectively.

Allison, professor at the University of Texas MD Anderson Cancer Center in the United States, worked on a protein known as CTLA-4 and realised during his work that if this could be blocked, a brake would be released, unleashing immune cells to attack tumours.

Honjo, professor at Kyoto University since 1984, separately discovered a second protein called PD-1 and found that it too acted as an immune system brake, but with a different mechanism.

The discoveries led to the creation of a multibillion-dollar market for new cancer medicines. In particular, drugs targeting PD-1 blockade have proved a big commercial hit, offering new options for patients with melanoma, lung and bladder cancers.

Sales of such medicines, which are given as infusions, are expected to reach some $15 billion this year, according to Thomson Reuters’ consensus forecasts, and some analysts see eventual revenues of $50 billion.

Thomas Perlmann, Secretary of the Nobel Committee of the Karolinska Institute told the news conference that he talked to Honjo over the phone just before the announcement.

“Honjo sounded extremely pleased,” Perlmann said. “He seemed rather surprised and expressed very clearly how pleased he was with the prize and also …with sharing the prize with Allison.”

Perlmann said he had not yet managed to contact Allison.

Commenting on Monday’s award, Dan Davis, an immunologist at Britain’s University of Manchester, said “this game-changing cancer therapy” has “sparked a revolution in thinking about the many other ways in which the immune system can be harnessed or unleashed to fight cancer and other illnesses.”

“I think this is just the tip of the iceberg – many more medicines like this are on the horizon,” he said.

By In Cyprus
Previous article
Cyprus and Greece are pillars of stability in the region, Greek Defence Minister says
Next article
Police appeal for care after Limassol beach thefts