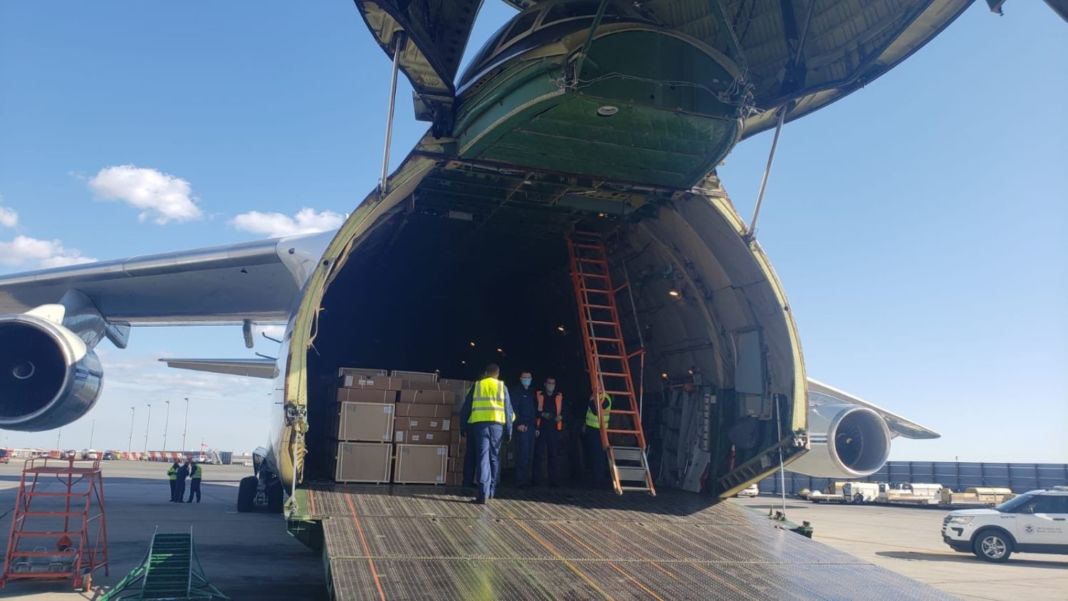 Ventilators delivered by Russia to the United States to help treat patients of the new coronavirus were manufactured by a Russian company that is under U.S. sanctions, Russia’s RBC business daily reported on Friday.

Russian state television footage of the plane’s unloading showed boxes of “Aventa-M” ventilators, which are produced by the Ural Instrument Engineering Plant (UPZ) in the city of Chelyabinsk, 1,500 km (930 miles) east of Moscow, RBC reported.

UPZ is part of a holding company called Concern Radio-Electronic Technologies (KRET), which itself is a unit of Russian state conglomerate Rostec.

KRET has been under U.S. sanctions since July 2014, with U.S. firms and nationals barred from doing business with it.

In a statement on Wednesday, the U.S. State Department said the United States had agreed to purchase medical supplies from Russia, but it made no mention of any company nor regarding sanctions.

“Both countries have provided humanitarian assistance to each other in times of crisis in the past and will no doubt do so again in the future. This is a time to work together to overcome a common enemy that threatens the lives of all of us,” said the statement, issued by State Department spokeswoman Morgan Ortagus.

U.S. officials in Washington could not immediately be reached for further comment on Friday. The U.S. Embassy in Moscow said it had nothing to add beyond what Ortagus had already said. The United States initially began imposing economic sanctions on Russia in 2014 to punish it for its annexation of Crimea from Ukraine and its backing for pro-Russian separatists in eastern Ukraine.

Additional rounds of sanctions have since been imposed on Moscow in response to its alleged meddling in the 2016 U.S. presidential elections and alleged involvement in the poisoning of former spy Sergei Skripal in Britain in 2018. Moscow denies both allegations.

Russian Foreign Ministry spokeswoman Maria Zakharova expressed surprise and disappointment that anyone was questioning what Moscow has cast as a sincere goodwill gesture meant to help the United States at a time of crisis.

“Aren’t ventilators needed in the United States?,” she said, saying Russia could take them back if they were not wanted.

#HappeningNow: #Russia's largest cargo aircraft An-124 Ruslan ✈️ with 😷 medical supplies has just landed at #NYC🗽. #RussiaHelps the US 🇺🇸 to stop the spread of #COVID19 pandemic and treat those contaminated with the disease. pic.twitter.com/5WTEJQct1k

Trump on Thursday described the Russian shipment as containing “a lot of medical, high-quality stuff” which could save a lot of lives and said he’d “take it every day” if he had the opportunity.

Russia’s sovereign wealth fund, the Russian Direct Investment Fund (RDIF), which said it had paid for half the shipment of medical equipment to the United States, was also added to U.S. sectoral sanctions in 2015.

The Russian Foreign Ministry said Moscow had paid half the cost with the other half picked up by Washington, though a Trump administration official later said the United States had picked up the whole tab.

Rostec, the state conglomerate which ultimately owns the Russian ventilator plant, told Reuters that its units were producing ventilators for the domestic market as part of the Russian government’s measures to fight the virus.

The decision to ship its products internationally was the prerogative of the Russian president and government, it said.

By In Cyprus
Previous article
Outpatients with Covid19 can be prescribed Azithromycin, 2 other drugs, says MoH
Next article
Lavrov: Move to change double tax agreement concerns all EU states