Right-wing and and anti-racism protesters scuffle in Britain 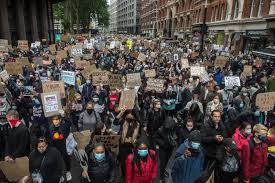 Anti-racism protesters rallied around Britain, with scuffles breaking out in London where counter-demonstrators also came out to protect monuments targeted for their links to colonial history.

Statues of historical figures including Winston Churchill – Britain’s World War Two leader whom protesters call a xenophobe – were boarded up to try and minimize trouble.

In Trafalgar Square, police separated two groups of about 100 people each, one chanting “Black Lives Matter”, the other racial slurs. Some groups jostled, tossed bottles and cans and set off fireworks, as riot police lined up.

Demonstrations have been taking place around the world over the death of African American George Floyd in Minneapolis after a white policeman knelt on his neck for nearly nine minutes.

In Britain, debate is raging over monuments to those involved in the nation’s imperialist past, especially after the statue of slave trader Edward Colston was torn down and thrown into the harbour of Bristol port last weekend.

Police said that some people were bringing weapons to the London rallies. They imposed route restrictions on both groups and said rallies must end by 5 p.m. (1600 GMT).