Republicans hopeful Senate will acquit Trump as early as Friday 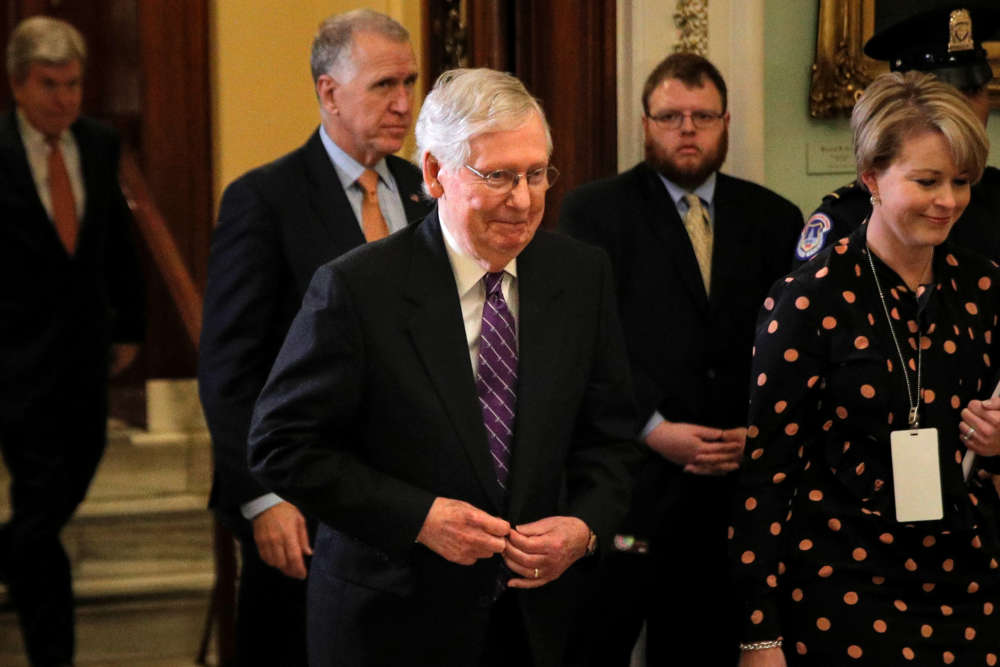 A Democratic push to force Republicans to accept witnesses at President Donald Trump’s impeachment trial in the U.S. Senate appeared to be flagging on Wednesday, raising the possibility he could be acquitted as early as Friday.

As senators questioned both the Trump legal team and the Democratic managers of the trial, Trump lawyer Alan Dershowitz offered an expansive defence of presidential power that provoked astonishment among Democrats.

“If a president does something which he believes will help him get elected in the public interest, that cannot be the kind of quid pro quo that results in an impeachment,” Dershowitz said, referring to the charge that Trump abused his power by using congressionally approved security aid as leverage to get a foreign power to smear his political rival, Joe Biden.

Democratic Senator Mazie Hirono told reporters: “That was one of the most bizarre things I’ve ever heard as a response.”

Senator John Barrasso, the third-most senior Republican, said it was possible the trial could end on Friday without witnesses being called, as Democrats want.

“The momentum is clearly in the direction of moving to final judgment on Friday. That vote will be Friday. We still have a couple of members who said they want to listen to the answers to questions, but that’s where the momentum is,” Barrasso said.

Asked when the vote might take place to settle the debate over witnesses and move to either acquit or convict Trump, Barrasso said probably Friday afternoon or late that day.

Other Republican senators were predicting a similar outcome in conversations with reporters during breaks in Wednesday’s proceedings.

The Democratic-led House of Representatives approved the two articles of impeachment being heard in the Republican-controlled Senate in December. Democrats have sought to persuade at least four Republican senators to vote with them in favor of witnesses to assure a majority vote in the 100-seat chamber.

Democratic Senator Chris Coons was asked during a break if the Democrats’ fight for witnesses was lost.

“I don’t know that for sure one way or the other,” he said, but called the tone and questions of senators “not encouraging.”

Democrats were not conceding defeat, however.

Late on Thursday, White House deputy counsel Patrick Philbin was asked if Trump agreed that foreign interference in U.S. elections is illegal. “Mere information is not something that would violate the campaign finance laws,” Philbin replied.

Democrats said they were aghast that a lawyer for Trump would suggest it is OK to solicit foreign interference.

While the Senate is expected to acquit Trump and leave him in office no matter what happens, allowing witnesses could inflict political damage on the president as he seeks re-election on Nov. 3.

One such witness is former national security adviser John Bolton, who left the White House in September after several sharp disagreements with Trump over the direction of foreign policy.

The New York Times has reported that Bolton wrote in an as-yet unpublished book that the president told him he wanted to freeze $391 million in security aid – passed by U.S. Congress to help Ukraine battle Russia-backed separatists – until Kiev pursued investigations into Democrats, including Biden and the former vice president’s son, Hunter.

On Wednesday, the White House objected to the book’s publication. A letter from the White House National Security Council to Bolton’s attorney said that based on a preliminary review, the manuscript appeared to contain “significant amounts of classified information.”

Some material was deemed top secret and could “cause exceptionally grave harm to the national security,” according to the letter, which was dated Jan. 23. It said the manuscript could not be published without deleting the classified information.

The manuscript was submitted to the White House for pre-publication review, a process that civil libertarians have said gives the government too much power to censor speech.

Democrats believe Bolton, a Republican foreign policy hawk, could help them solidify their case against the president and want to call him and a small number of other officials to testify. Trump’s fellow Republicans in the Senate have resisted the idea.

Bolton lawyer Charles Cooper said on Wednesday that neither he nor his client believe that any information in a chapter on Ukraine “could reasonably be considered classified.” He asked for a quick determination in case Bolton was called to testify.

Trump added that Bolton “goes out and IMMEDIATELY writes a nasty & untrue book. All Classified National Security. Who would do this?”

Responding to a question by top Senate Democrat Chuck Schumer, lead House prosecutor Adam Schiff said there would be no way to have a fair trial without witnesses.

“And when you have a witness as plainly relevant as John Bolton who goes to the heart of the most serious and most egregious of the president’s misconduct, who has volunteered to come and testify – to turn him away, to look the other way, I think is deeply at odds with being an impartial juror,” Schiff said.

Trump’s legal team has argued that the evidence supporting the charges against him is based on hearsay. It also asserts Trump did not commit an impeachable offense even if the allegation is true.

Removing Trump from office would take a two-thirds majority. None of the 53 Republican senators has publicly advocated removal.