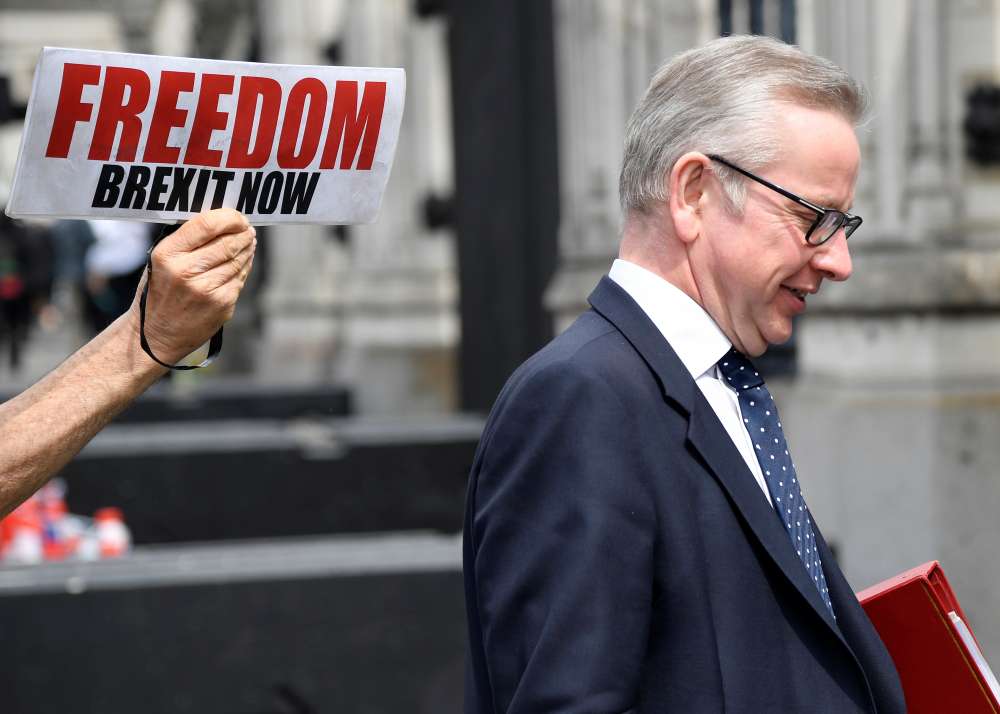 The prospect of a “no deal” Brexit was fast becoming the central battle of the race to succeed Prime Minister Theresa May on Sunday, as environment minister Michael Gove became the latest candidate to declare.

May said on Friday she was quitting over her failure to deliver Brexit, potentially opening the way for a new leader who could seek a more divisive split with the European Union and lead to confrontation with the bloc or a possible parliamentary election.

Setting out their pitch to the Conservative Party’s largely pro-Brexit membership who will decide the outcome of the contest, four of the leadership hopefuls have said Britain must leave the EU on Oct. 31 even if this means a no-deal Brexit.

“I will fight for a fairer deal in Brussels … if not I will be clear we will leave on WTO terms in October,” former Brexit minister Dominic Raab, who bookmakers rank as the second favourite to win, told BBC TV.

“If you’re not willing to walk away from a negotiation, it doesn’t focus the mind of the other side … I will not ask for an extension.”

Fellow contenders Esther McVey and Andrea Leadsom both made similar comments on Sunday, while former foreign minister Boris Johnson, the favourite to replace May, said on Friday: “We will leave the EU on October 31, deal or no deal.”

Gove, a leading campaigner for Brexit during the 2016 referendum campaign and a candidate in the Conservative leadership contest that May ultimately won, told reporters on Sunday that he planned to run again.

“I am ready to unite the Conservative and Unionist Party, ready to deliver Brexit and ready to lead this great country,” he said, without giving any detail on his plans for Brexit.

The EU has said it will not reopen negotiations on the Withdrawal Agreement, which has been rejected by parliament three times, while British lawmakers have also repeatedly voted against the prospect of a no-deal exit.

Highlighting the deep splits within the governing party over the way forward on Brexit, several senior Conservatives, including leadership candidate Rory Stewart, on Sunday warned against pursuing the policy of leaving without a deal.

“I will urge all of my colleagues who are standing in this contest to embrace the concept of compromise … going to parliament with a hard line absolutist view and daring parliament to accept it is quite a dangerous strategy,” he told BBC TV.

Hammond said he could not support a no-deal strategy but declined to say what he would do if there was a vote of confidence in a government which adopted that policy.

“In 22 years in parliament I have never voted against the Conservatives … and I don’t want to have to start now contemplating such a course of action,” he said.

The opposition Labour Party said it was seeking to work with other parties to try and block May’s successor from taking Britain out of the EU without a deal.

“There is real threat now of an extremist Brexiteer becoming the leader of the Conservative Party and taking us over the cliff edge of a no deal,” Labour’s finance spokesman John McDonnell told Sky News. “We have got to move to block a no deal.”

The deadlock over Brexit is expected to have hit both main parties when the results of the European Parliament elections are declared from 2100 GMT on Sunday, with Nigel Farage’s Brexit Party, which backs a no-deal exit, predicted to come out on top.