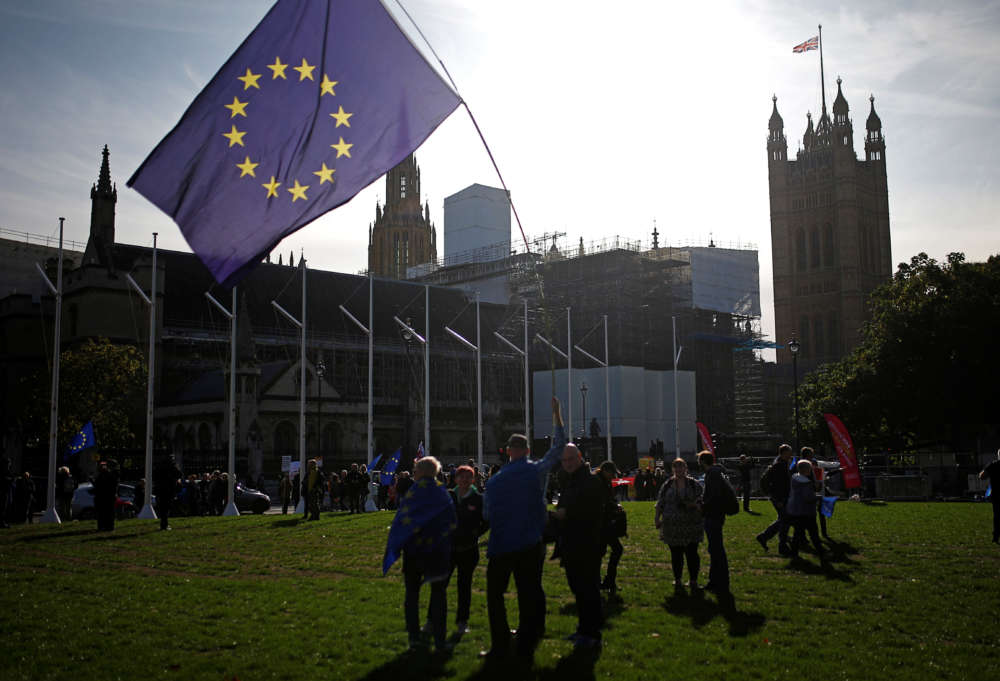 Protesters demonstrate outside Westminster as parliament sits on a Saturday for the first time since the 1982 Falklands War, to discuss Brexit in London

The battle over Brexit spills onto the streets of London on Saturday when many thousands of people are expected to march through London to demand a new referendum just as parliament decides the fate of Britain’s departure from the European Union.

After more than three years of tortuous debate, it is still uncertain how, when or even if Brexit will happen as Prime Minister Boris Johnson tries to pass his new Brexit deal and plots a way out of the deepest political crisis in a generation.

The protesters, from around the United Kingdom, will gather at Park Lane near Hyde Park at midday and walk down to parliament as lawmakers prepare to vote in the first Saturday session since the 1982 Falklands war.

James McGrory, director of the People’s Vote campaign, which organised the march, said the government should heed the anger of pro-Europeans and hold another referendum on Brexit.

“This new deal bears no resemblance to what people were promised and so it is only right that the public deserve another chance to have their say,” he said.

“There can be no better demonstration of the changing will of the people than hundreds of thousands of people on the streets demanding they are listened to as politicians inside parliament take a decision that will affect us for generations.”

While Brexit has divided families, parties, parliament and the country, both sides agree that Saturday could be one of the most important days in recent British history: a juncture that could shape the fate of the United Kingdom for generations.

Campaigners are confident that the number of people on the streets will rival a similar demonstration held in March, when organisers said 1 million people took to the streets.

A rally this size would be among the largest ever in Britain.

More than 170 coaches from around Britain are due to arrive in London to take people to the march. Nine coaches left Scotland on Friday evening and four left from Cornwall on England’s western tip in the early hours of Saturday.

While such an explicit show of discontent is unlikely to change the course of Brexit, the protest frames the drama in parliament and shows there is still significant support for another EU referendum.

Some opinion polls have shown a slight shift in favour of remaining in the European Union, but there has yet to be a decisive change in attitudes and many voters say they have become increasingly bored by Brexit.

Since July 2017 there have been 226 polls asking people whether they support Leave or Remain, according to a poll of polls by YouGov published last week. Of those, 204 have put support for remaining in the EU ahead, seven have given a lead to leave and a few have been tied.

However, other evidence suggests most voters have not changed their mind: 50% of the public want to respect the referendum result, 42% want Britain to remain in the EU and 8%said they don’t know, the largest Brexit poll since 2016 carried out by Comres found.

Supporters of Brexit have repeatedly ruled out holding another referendum, saying it would deepen divisions and undermine support for democracy.

A group of lawmakers in the main opposition Labour Party have put forward an amendment calling for approval of any deal to be put to a second referendum, although this will only be debated if Johnson’s agreement is voted down.

The challenge for pro-referendum forces is finding enough support in parliament. In April, when the government held a series of votes on the various Brexit options, a second referendum was the most popular one, but fell short of a majority losing 292 to 280.

Even if another referendum were agreed, it would take months to organise, there would be disputes about the question – and the result would be impossible to predict.