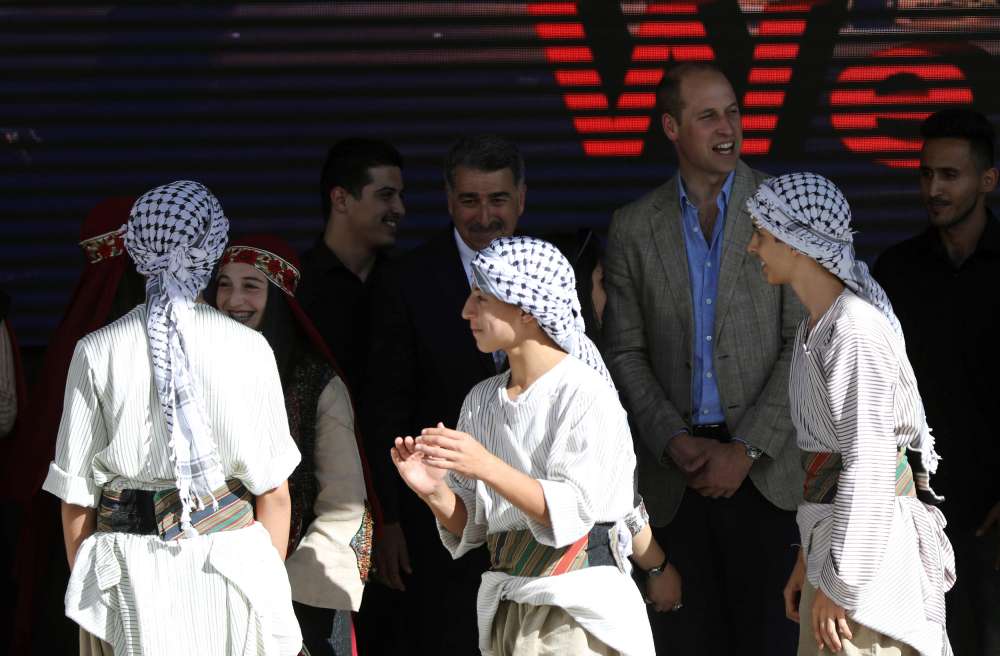 Prince William paid the first official British royal visit to the Palestinian Territories on Wednesday, touring a refugee camp in the Israeli-occupied West Bank and voicing hope for peace in a meeting with the Palestinian president.

William, second in line to the throne, received a red-carpet welcome to the Muqata, the Palestinian government headquarters in the city of Ramallah, that included an honour guard and band.

“I’m very glad our two countries work so closely together and have had success stories with education and relief work in the past, so, long may that continue,” William told President Mahmoud Abbas.

“My sentiments are the same as yours in hoping that there is a lasting peace in the region,” the prince said.

William then visited Jalazone refugee camp and its health clinic and a school, administered by the United Nations Relief and Works Agency (UNRWA).

A sign banning weapons – a picture of a Kalashnikov assault rifle with red line through it – was on the door of the health centre, which the prince toured before visiting the school and chatting with pupils.

Armed Palestinian security men stood on rooftops in the camp, reached via an unpaved road and bordering a large Jewish settlement. More than 9,000 people live in the crowded camp of cinderblock and concrete buildings.

On Tuesday, Israeli President Reuven Rivlin publicly asked the prince to bring Abbas “a message of peace” and tell him it is time to find a way to “build confidence” between Israel and the Palestinians.

Rivlin’s position is largely ceremonial and in remarks released to the media after his own meeting with William earlier that day Prime Minister Benjamin Netanyahu made no such request.

Peace talks between Israel and the Palestinians collapsed in 2014 and the divide between the two sides has widened in the years since amid bouts of violence.

The West Bank, where Palestinians have limited self-rule, has been largely quiet in recent months, in contrast to surges of fighting along Israel’s frontier with Gaza, an enclave ruled by Abbas’s main Palestinian rival, the Hamas Islamist group.

Israeli troops have killed at least 130 Palestinians during mass demonstrations along the border since March 30.

“The Palestinian side is committed to the peace process with the Israelis, so both states could live peacefully together within the borders of 1967,” Abbas said in his public remarks at his meeting with William.

Palestinians want East Jerusalem, captured by Israel along with the West Bank and Gaza Strip in the 1967 Middle East war, as the capital of an independent state they seek to establish in the two territories.

In 2005 Israel pulled troops and settlers out of Gaza, but maintains tight control of the territory’s land and sea borders, citing security concerns. This has deepened hardship in Gaza, whose economy, international experts say, is in a state of collapse.

Until now it had been British policy not to make an official royal visit to Israel and the occupied territories until the Israeli-Palestinian conflict was resolved.

“It’s not a time when he can come and celebrate success in the Middle East peace process or anything of that sort, but it is a time when we can show our interest in the region,” Philip Hall, Britain’s consul-general in Jerusalem, told Reuters before William flew to the Middle East.

Before his motorcade crossed into the West Bank, William strolled along a trendy Tel Aviv boulevard with Israeli Eurovision song contest winner Netta Barzilai to the delight of cheering onlookers.

But there was no “chicken-dance”, Barzilai’s signature move performed as part of her women’s empowerment hit “I’m Not Your Toy” during the 2018 song-fest.

William’s four-day tour, which ends on Thursday with a visit to holy sites, also marks the first time a member of the British royal family has paid an official visit to Israel.

In downtown Tel Aviv, William walked with the purple-braided singer along Rothschild Boulevard. The tree-lined avenue at the heart of the city’s financial districts contains shops, restaurants and galleries.

William and Barzilai chatted at a kiosk, described as one of the first refreshment stands in Tel Aviv. They were served “Gazoz”, a retro Israeli soft drink made from flavoured syrup and fizzy water.

The day before he had focused in his first engagements in Israel on honouring the memory of victims of the Nazi Holocaust.