Pompeo confirms he was on call between Trump and Ukraine leader 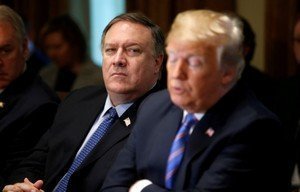 U.S. Secretary of State Mike Pompeo confirmed on Wednesday that he had listened in on a call between U.S. President Donald Trump and Ukraine’s leader that has caused a storm, saying the conversation had centred on U.S. policy priorities.

“I was on the phone call,” Pompeo told reporters during a visit to Italy, confirming previous media reports.

He said Trump’s comments had come within the context of U.S. policymaking, including cutting corruption in the east European state, boosting the economy and “taking down the threat Russia poses there in Ukraine”.

“I know precisely what the American policy is with respect to Ukraine, it’s been remarkably consistent. We will continue to try to drive those set of outcomes,” he said.

He did not specifically respond to a question about whether he heard anything in the call that concerned him or raised red flags.

Pompeo on Tuesday objected to a move by the U.S. House of Representatives to obtain depositions from five current and former State Department officials as part of the Democrat-led impeachment inquiry, and accused Democrats of bullying and intimidation.

Asked about his concerns, Pompeo said State Department employees had been contacted directly by lawmakers or their staff and told not to talk to the State Department’s legal counsel.

“What we objected to were the demands that deeply violate the fundamental principles of separation of powers,” he said.

“There are important constitutional prerogatives that the executive branch has to be present so that we can protect important information so our partners … can have confidence that the information that they provide the State Department will continue to be protected,” he said.

Pompeo is on a three-day trip to Italy, which will include a private audience with Pope Francis on Thursday and a visit to his ancestral home in the rugged, central Abruzzo region.

He will then fly on to Montenegro, North Macedonia and Greece. But the trip has been overshadowed by the impeachment inquiry at home.

House Foreign Affairs Committee Chairman Eliot Engel and two other Democratic committee chairmen issued a statement on Tuesday accusing Pompeo of “stonewalling” the inquiry, and said he was a “fact witness”.