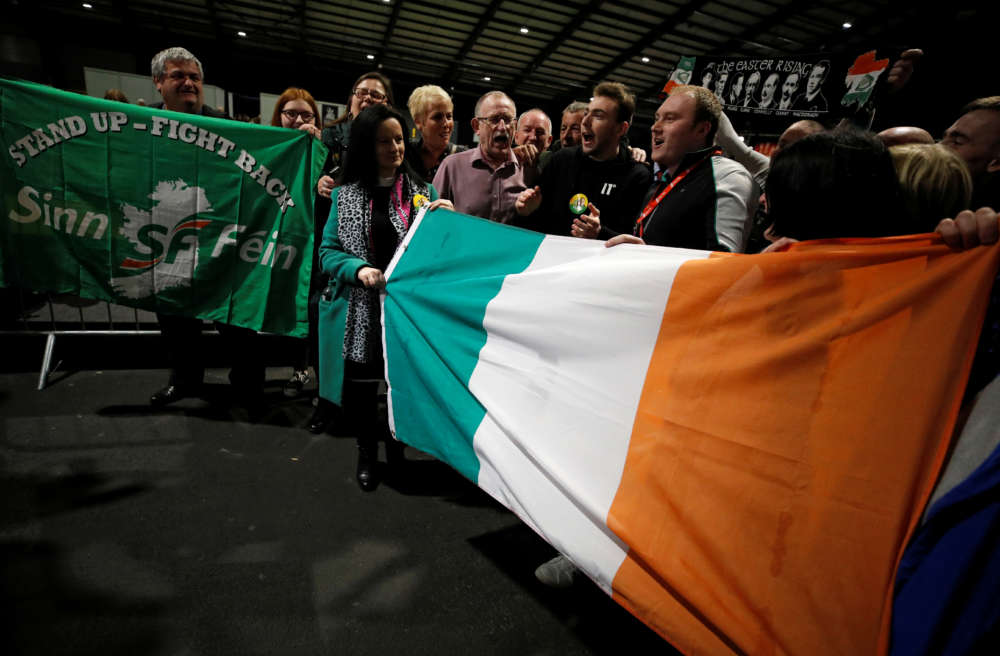 Ireland began counting votes on Sunday in a national election that an exit poll indicated would show a historic breakthrough for left-wing nationalists Sinn Fein but leave a fractured political landscape with no clear path to a governing coalition.

In a major realignment, Sinn Fein support surged 50% to bring it into joint first place on 22% with Fine Gael and Fianna Fail, the two centre-right parties that have dominated Irish politics for a century, according to the poll released on Saturday evening after voting ended.

But Sinn Fein, the former political wing of the Irish Republican Army which has reinvented itself as the country’s main left-wing party, is likely to fall behind the other two because it fielded fewer candidates for parliament.

Early counting appeared to back up the exit poll findings.

Prime Minister Leo Varadkar’s Fine Gael and rival Fianna Fail are likely to be left slugging it out for first place in terms of seats – before starting what is set to be a tortuous process of forming a government in the 160-seat parliament.

“I think it will be very tight, the parties (Fine Gael and Fianna Fail) are very close,” Fine Gael minister Richard Bruton told Reuters, adding that he saw “no flinching at all” in Fine Gael’s position of refusing to govern with Sinn Fein.

Counting under Ireland’s complex single transferable vote system began at 0900 GMT on Sunday with some results expected from early afternoon. The final and potentially decisive seats may not be filled until Monday or even later.

Sinn Fein has moved on from the long leadership of Gerry Adams, seen by many as the face of the IRA’s war against British rule in Northern Ireland – a conflict in which some 3,600 people were killed before a 1998 peace deal.

Early tallies showed new leader Mary Lou McDonald had more than twice the number of votes needed for election in her constituency. The pattern looks set to be replicated across the country but Sinn Fein will be disadvantaged by having only one candidate in most of the multi-seat contests.

Irish tricolour flags were flown at a Dublin count centre as Sinn Fein supporters were led in a chorus of the Irish rebel song “Come Out Ye Black and Tans” by Dessie Ellis, an outgoing lawmaker who was jailed on possession of explosives in 1981.

The exit poll result was an improvement for Varadkar’s Fine Gael, in power since 2011, after opinion polls a week ago showed it in third place.

But the party’s strategy of focusing on the fastest growing economy in the EU and success in negotiating a Brexit deal that avoided a hard border with Northern Ireland failed to capture the imagination of voters, who were far more focused on issues like health and housing, where Sinn Fein focused.

Just 1% of exit poll respondents said Britain’s exit from the EU was a factor in how they voted, Ipsos MRBI found.

Fianna Fail has ruled out going into coalition for the first time with Fine Gael and both parties say they will not govern with Sinn Fein, citing its IRA past and different economic policies, meaning there is no obvious government to be formed.

Both Fine Gael and Fianna Fail have said they will look to smaller parties to form what would likely be another minority government – requiring support of one of the two main parties from the opposition benches via a “confidence and supply deal.”

They will also likely want to avoid a second election where Sinn Fein could capitalise.

The two parties, which have swapped power at every election since emerging from the opposing sides of Ireland’s 1920s civil war, have similar policies on the economy and Brexit.

“The issue really is what kind of confidence and supply agreement could be put together and are we in a position where that’s a realistic option,” Bruton said.

By In Cyprus
Previous article
Fourth case of coronavirus found in Britain; linked to cases in France
Next article
Met Office office issues orange alert, temperatures to plunge to -10 in Troodos