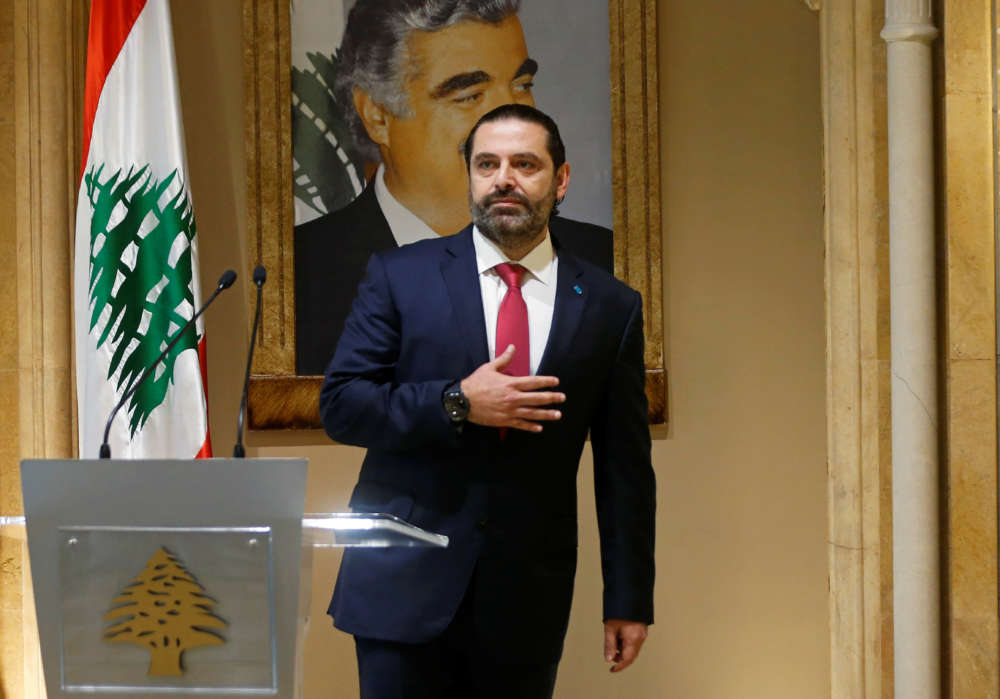 Saad al-Hariri resigned as Lebanon’s prime minister on Tuesday, declaring he had hit a “dead end” in trying to resolve a crisis unleashed by huge protests against the ruling elite and plunging the country deeper into turmoil.

Hariri addressed the nation after a mob loyal to the Shi’ite Muslim Hezbollah and Amal movements attacked and destroyed a protest camp set up by anti-government demonstrators in Beirut.

It was the most serious strife on the streets of Beirut since 2008, when Hezbollah fighters seized control of the capital in a brief eruption of armed conflict with Lebanese adversaries loyal to Hariri and his allies at the time.

Hariri’s resignation on Tuesday points to rising political tensions that may complicate the formation of a new government capable of tackling Lebanon’s worst economic crisis since its 1975-90 civil war.

The departure of Hariri, who has been traditionally backed by the West and Sunni Gulf Arab allies, raises the stakes and pushes Lebanon into an unpredictable cycle. Lebanon could end up further under the sway of the Iranian-backed Hezbollah, making it even harder to attract badly-needed foreign investment.

It also defies Hezbollah, which was part of his coalition and wanted him and the government to stay on. Hariri is seen as the focal point for Western and Gulf Arab aid to Lebanon, which is in dire need of financial support promised by these allies.

Lebanon has been paralysed by the unprecedented wave of protests against the rampant corruption of the political class.

“For 13 days the Lebanese people have waited for a decision for a political solution that stops the deterioration (of the economy). And I have tried, during this period, to find a way out, through which to listen to the voice of the people,” Hariri said.

“It is time for us to have a big shock to face the crisis,” he said. “To all partners in political life, our responsibility today is how we protect Lebanon and revive its economy.”

Under Lebanon’s constitution, the government will stay on in a caretaker capacity as talks begin on forming a new one. It took nine months to form the Hariri coalition cabinet that took office in January.

Some described Hariri’s resignation as a victory for the “Oct. 17 uprising” and said the attack on the protest camp had redoubled their determination.

“What happened is a point of strength for us … If the thugs come in bigger numbers, so will we,” said Kamal Rida, a protester in central Beirut. “The tents that are broken can be rebuilt, easy.”

The turmoil has worsened Lebanon’s acute economic crisis, with financial strains leading to a scarcity of hard currency and a weakening of the pegged Lebanese pound. Lebanese government bonds tumbled on the turmoil.

On the streets of Beirut, black-clad men wielding sticks and pipes attacked the protest camp that has been the focal point of countrywide rallies against the elite.

Sayyed Hassan Nasrallah, head of the heavily armed, Iran-backed Hezbollah, said last week that roads closed by protesters should be reopened and suggested the demonstrators were financed by its foreign enemies and implementing their agenda.

Smoke rose as some of the protester tents were set ablaze by Hezbollah and Amal supporters, who earlier fanned out in the downtown area of the capital shouting “Shia, Shia” in reference to themselves and cursing anti-government demonstrators.

Security forces did not initially intervene to stop the assault, in which protesters were hit with sticks and were seen appealing for help as they ran, witnesses said. Tear gas was eventually fired to disperse the crowds.

Hariri did not refer to the violence in his address but urged all Lebanese to “protect civil peace and prevent economic deterioration, before anything else”.

France, which has supported Hariri, called on all Lebanese to help guarantee national unity.

U.S. Secretary of State Mike Pompeo urged the formation of a new government responsive to the needs of the Lebanese people.

“The Lebanese people want an efficient and effective government, economic reform, and an end to endemic corruption,” Pompeo said in a statement.

Lebanon’s allies last year pledged $11 billion in financing to help it revive its economy, conditional on reforms that Hariri’s coalition government has largely failed to implement.

But there has been no sign of a rush to help.

A senior U.S. State Department official said last week this was not a situation where the Lebanese government should necessarily get a bailout, saying they should reform first.

Banks were closed for a 10th day along with schools and businesses.

Hariri last week sought to defuse popular discontent through a batch of reform measures agreed with other groups in his coalition government, including Hezbollah, to – among other things – tackle corruption and long-delayed economic reforms.

But with no immediate steps towards enacting these steps, they did not placate the demonstrators.

Central bank governor Riad Salameh called on Monday for a solution to the crisis in just days to restore confidence and avoid a future economic meltdown.

A black market for U.S. dollars has emerged in the last month or so. Three foreign currency dealers said a dollar cost 1,800 pounds on Tuesday, weakening from levels of 1,700 and 1,740 cited on Monday.

The official pegged rate is 1,507.5 pounds to the dollar.

“Even if the protesters leave the streets the real problem facing them is what they are going to do with the devaluation of the pound,” said Toufic Gaspard, an economist who has worked as an adviser to the IMF and to the Lebanese finance minister.

By In Cyprus
Previous articleBritain set for Dec. 12 election to break the Brexit deadlock
Next articleCyprus determined to proceed with its energy plans, President Anastasiades says