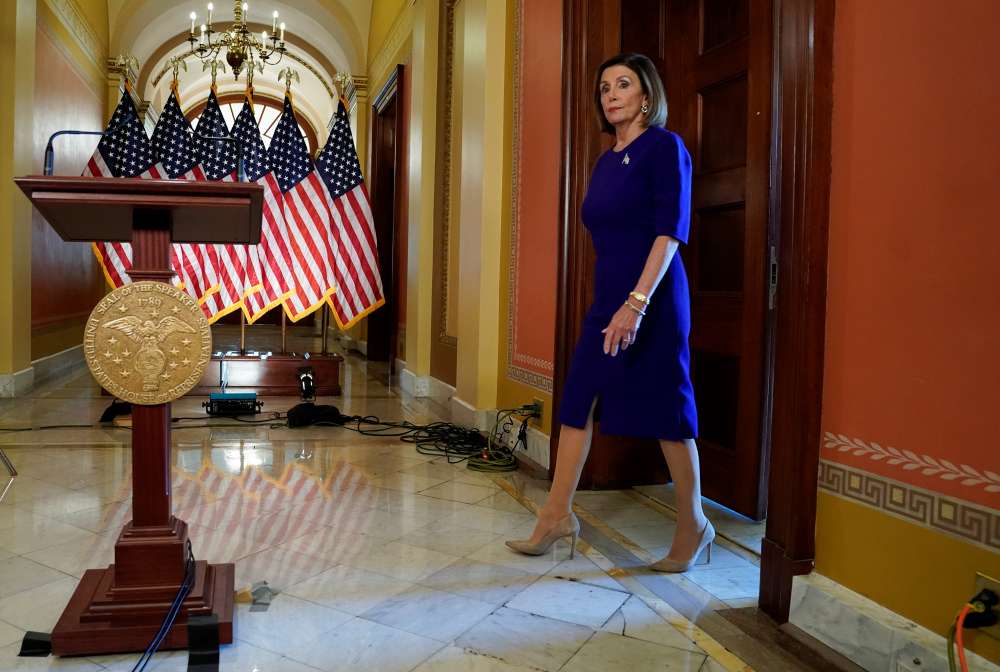 U.S. House Speaker Nancy Pelosi said Democratic leaders cut short a meeting with Republican President Donald Trump after he had a “meltdown” over a House of Representatives vote condemning his Syria withdrawal and showed no signs of having a plan to deal with a crisis there.

Later, in remarks to reporters on Capitol Hill, Pelosi said that Trump actually called her a “third-grade” politician.

“What we witnessed on the part of the president was a meltdown. Sad to say,” Pelosi had said upon leaving.

Trump posted on Twitter on Wednesday night – “Nervous Nancy’s unhinged meltdown!” with a photo of Pelosi standing up and pointing at him during the meeting.

The Democrats exited the meeting complaining that they were expecting to hear Trump provide details on a plan for dealing with an unfolding “crisis” in Syria but instead were subjected to “derogatory” language from him about congressional Democrats and Democratic former President Barack Obama.

White House spokeswoman Stephanie Grisham, in a statement, called Pelosi’s decision to walk out “baffling but not surprising.”

She added that after Democratic leaders “chose to storm out,” remaining Republican leaders held a productive meeting.

Trump’s decision to withdraw American forces ahead of a Turkish offensive last week into northern Syria against U.S.-allied Syrian Kurdish fighters, removing their protection, has been roundly criticized, even by fellow Republicans. The Americans and the Kurds had fought alongside each other against Islamic State militants, some of whom were captured and jailed under Kurdish control in Syria.

A Democratic source familiar with the meeting said Trump referred to fewer than 100 Islamic State (ISIS) prisoners escaping after the president’s decision and that those were “the least dangerous” ones.

The source said that Defence Secretary Mark Esper confirmed the number of fewer than 100 but did not acknowledge that they were the least dangerous of those being held in prison.

The source added that Schumer pressed Esper on whether Turkey or Syria have ensured that the remaining prisoners be kept in jail. Esper, the source said, told lawmakers he did not have such intelligence reports.

Pelosi said Trump was upset at the start of the closed meeting because so many Republicans joined Democrats to vote for a resolution condemning his decision to withdraw U.S. forces from northeastern Syria.

The vote was 354 to 60, with dozens of Trump’s fellow Republicans joining the majority Democrats. The split underscored deep unhappiness in Congress over Trump’s action, which many lawmakers view as abandoning loyal Kurdish fighters.

“I think that vote – the size of the vote, more than 2-1 of the Republicans voted to oppose what the president did – probably got to the president. Because he was shaken up by it,” Pelosi said after emerging from the White House.

“And that’s why we couldn’t continue in the meeting because he was just not relating to the reality of it.”

The Democratic source familiar with the meeting said that when Pelosi and Hoyer were getting ready to walk out, Trump said to them: “I’ll see you at the polls.” Nineteen Democratic contenders are seeking their party’s nomination to run against Trump in the November 2020 presidential election.

Representative Michael McCaul, the top Republican on the House Foreign Affairs Committee, said he was disappointed to see Democratic leadership walk out of the meeting.

Pelosi said the White House scrapped a briefing for the full House scheduled for Thursday and the Democrats said they were concerned Trump did not have a strategy in the region.

“I asked the president what his plan was to contain ISIS. He didn’t really have one,” Schumer said.