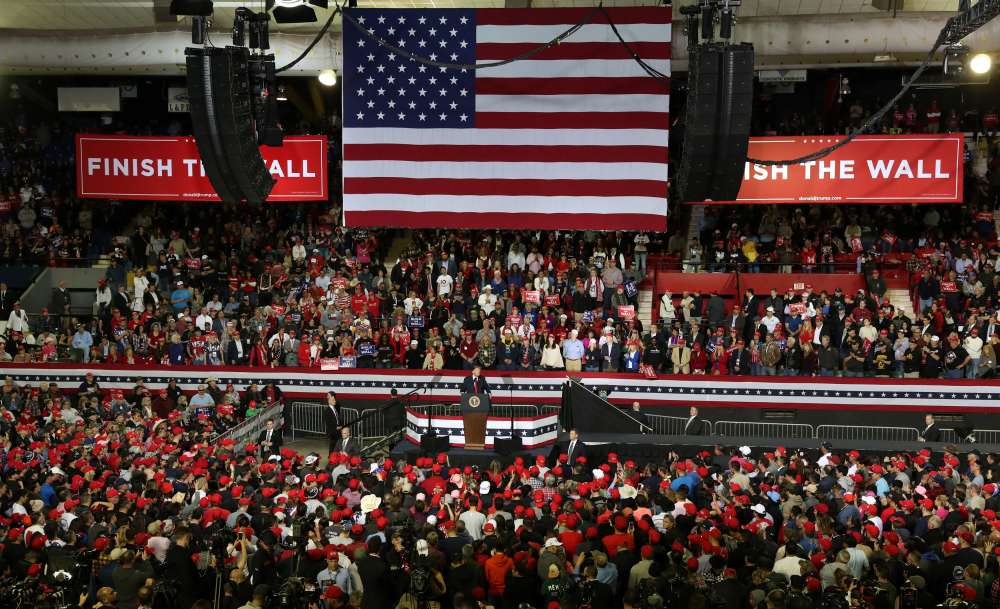 Potential White House hopeful Beto O’Rourke accused Donald Trump of fear-mongering on Monday and the Republican president mocked the Democrat as a “young man who lost” in duelling rallies that could preview the tenor of the 2020 election campaign.

O’Rourke, who narrowly lost his 2018 bid for a U.S. Senate seat, accused Trump of stoking “false fear” about immigrants and telling “lies” about his hometown El Paso, which Trump said was a dangerous place before it had a border fence.

“We stand for America and we stand against a wall,” O’Rourke told a crowd of several thousand supporters, many waving “Beto 2020” signs and wearing “Immigrants Make America Great” baseball caps. “Walls do not save lives, they end lives.”

Two hundred yards away in El Paso County Coliseum, Trump told his supporters that O’Rourke had “little going for himself, although he’s got a great first name.”

“We are all challenged by a young man who lost an election to (Republican Senator) Ted Cruz,” said Trump.

He said that O’Rourke’s rally was smaller than his, and that was a bad sign: “That may be the end of his presidential bid.”

Reuters could not verify Trump’s claim that 35,000 people attended his rally, with about 10,000 inside. The city’s fire department allowed only the capacity 6,500 inside, the El Paso Times reported. Police estimated between 10,000 and 15,000 attended the O’Rourke march and rally, the newspaper said.

As the two men spoke, U.S. congressional negotiators said they had reached a tentative deal to try to avert another partial government shutdown. Aides said it did not contain the $5.7 billion Trump wanted for his wall that triggered the shutdown last month.

Trump made clear on Monday he would not drop the demand for a border wall that delights his followers, first made in his campaign in the 2016 election. Giant banners at his rally read “Finish The Wall.”

National polls show the wall is not popular with the majority of voters. A Reuters/IPSOS survey found 43 percent of the U.S. public supported additional border fencing.

Trump said he had heard about a possible deal in Washington before he took the stage, but added: “Just so you know – we’re building the wall anyway. Maybe progress has been made – maybe not.”

It was Trump’s first direct clash with a potential 2020 rival, albeit on separate stages.

O’Rourke relished the prime-time national platform, sometimes breaking into Spanish, in what sounded like a campaign speech. He decried the Trump administration’s separation of immigrant children from their parents at the border.

“With a president who describes Mexican immigrants as rapists and criminals, we have a chance to tell him and the country that immigrants commit crime at a lower rate than Americans who are born in this country,” he said to shouts of “Beto, Beto.”

Trump was pressing his case on immigration in the Democratic bastion of El Paso county, where the population is over 80 percent Hispanic.

“I will never sign a bill that forces the mass release of violent criminals into our country,” he said, referring to a Democratic proposal in the Washington talks to lower the cap on detentions of criminal aliens by Immigration and Customs Enforcement (ICE).

Under Monday’s tentative agreement, the cap would likely stay around the same as in previous years, a congressional aide said.

Although O’Rourke’s full-throated denunciation of the president sounded like he planned to run against Trump, the two-time congressman declined to discuss a potential bid when asked by reporters on a conference call on Monday.

O’Rourke told Oprah Winfrey last week he would make a final decision about running for president by the end of the month.