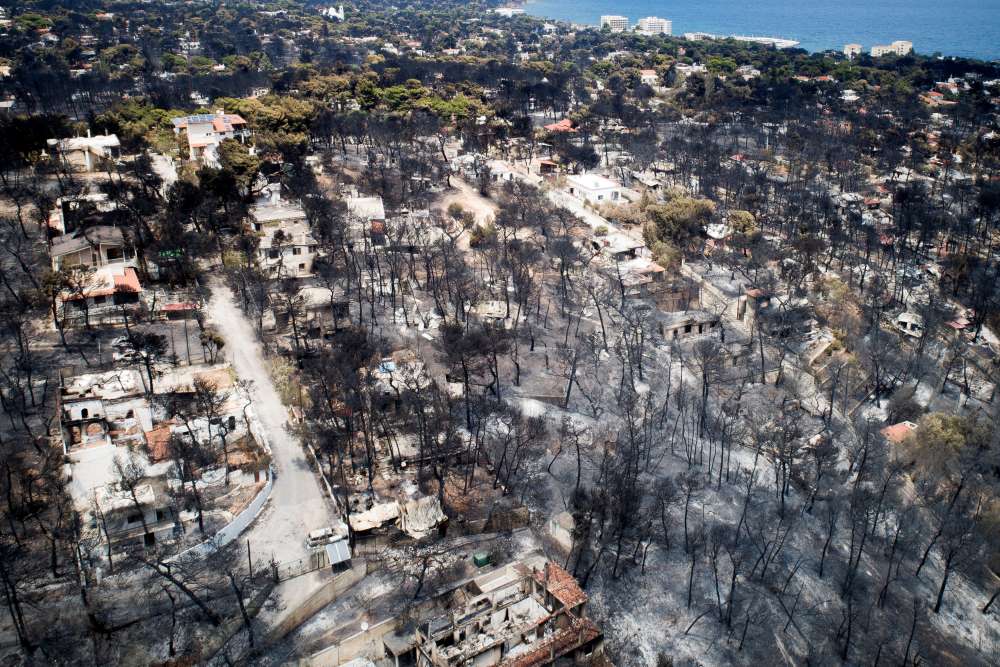 Standing in the burnt-out shell of what used to be his home and business, Theodoros Kouris waits for Greek government inspectors to decide the building’s fate.

It has been one month since Greece’s deadliest wildfire ravaged the now deserted seaside town of Mati, killing 96 people, and life here is still far from normal.

Funeral notices are plastered on electricity poles. The smell of burned pine still lingers in the air, along with a metallic odour from melted cars and other objects. A few people wander the streets, wearing surgical masks.

An inspector spray-paints a red triangle onto Kouris’s wall, declaring the building that was his home and, next to it, his grocery store, unsuitable and set for demolition.

“My roots are here,” the 43-year-old said softly, motioning to the ground. “I was born here together with my late brother. I cannot accept that I will be uprooted.”

Kouris, his wife and their three children now live with relatives in Athens and hope to qualify for relief measures announced by the government, including financial assistance.

“We’re hearing a lot of talk,” he said. “I hope that even a third of what they say materializes, so that we can rebuild and make a fresh start.”

More than 4,300 people have applied for state aid, the government said on Thursday. Engineers inspecting the area have so far ordered scores of buildings to be demolished.

Mati, a heavily wooded area which sits on the coast east of Athens overlooking the sparkling sea, was popular with pensioners and children at summer camps. Now scorched, it resembles a ghost town.

“The area has become desolate,” a 50-year-old woman who gave her name as Maria said, as she and her daughter filled bags of wreckage cleared out from a summer home built by her grandfather.

Even those whose houses were not destroyed have left the area, not only over a lack of electricity and water but because, Maria said, “the atmosphere is heavy.”

“I believe it will take years before we can return to normal circumstances,” she said.

Sitting in the blackened yard, Maria’s 85-year-old mother was there to bid farewell to the house in the event it was torn down.

“The house burned down but my memories have not,” Maria said. “Houses can be rebuilt. People don’t come back.”

By In Cyprus
Previous article
Omarosa’s ‘Unhinged’ settles for No. 2 spot on U.S. best-seller list
Next article
New US Senate restrictions on sale of F-35 fighters to Turkey