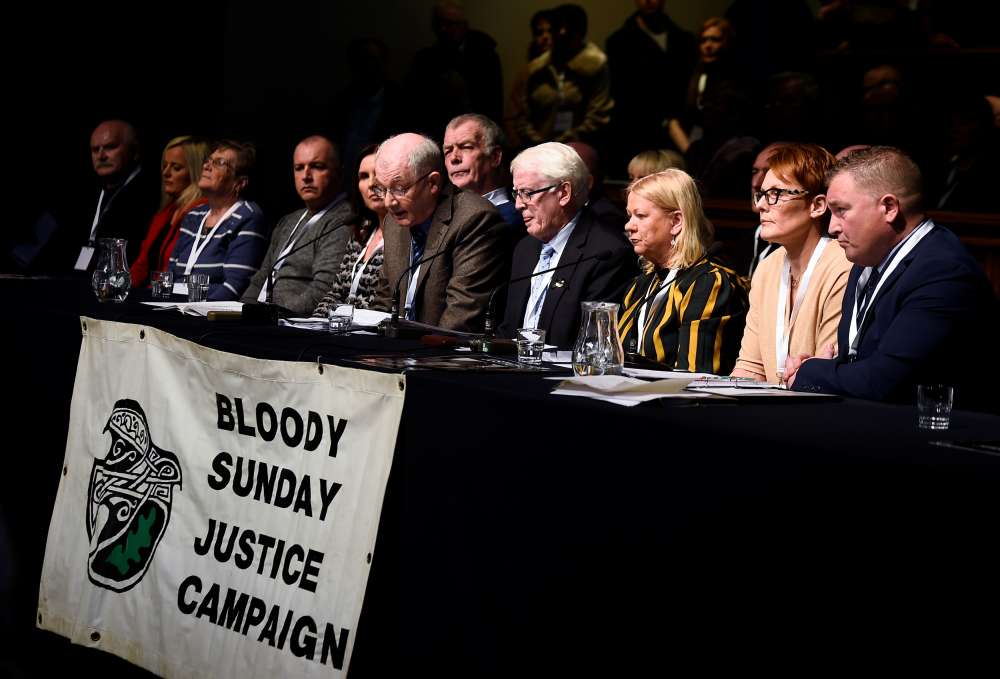 One former British soldier will be prosecuted for two murders in the “Bloody Sunday” killings of 13 unarmed Catholic civil rights marchers in Londonderry by British paratroopers in 1972 – one of the most notorious incidents of the Northern Ireland conflict.

Soldiers from the elite Parachute Regiment opened fire on Sunday, Jan. 30, 1972, during an unauthorised march in the Bogside, a nationalist area of Londonderry. They killed 13 people and wounded 14 others, one of whom died later.

A judicial inquiry into the events of Bloody Sunday, which took place at the height of Northern Ireland’s 30-year sectarian conflict, said in 2010 the victims were innocent and had posed no threat to the military.

It was the worst single shooting incident of “The Troubles”, although several bomb attacks by rival militant groups claimed higher death tolls, and Thursday’s decision reignites the controversy.

The prosecutor announced on Thursday that there was sufficient evidence to prosecute “Soldier F” for the murder of James Wray and William McKinney and for the attempted murders of Joseph Friel, Michael Quinn, Joe Mahon and Patrick O’Donnell.

But “in respect of the other 18 suspects, including 16 former soldiers and two alleged Official IRA members, it has been concluded that the available evidence is insufficient to provide a reasonable prospect of conviction,” a prosecutor’s statement said.

Victim’s families said they were disappointed by the decision. Their lawyers said they would challenge in the High Court any prosecutorial decision that did not withstand scrutiny.

Before a prosecutor’s service briefing at a Londonderry hotel, the families marched from the Bogside and sang civil rights anthem “We Shall Overcome”.

Linda Nash, the brother of William Nash, a 19-year-old killed on the day, was tearful when she emerged from the hotel. Veteran civil rights campaigner Eamonn McCann’s hands shook as he comforted her.

“However, much of the material which was available for consideration by the Inquiry is not admissible in criminal proceedings, due to strict rules of evidence that apply,” he said.

The British government said it would provide full legal support to the soldier who will face prosecution. No other details were released by prosecutors of the identity of the man, who would be at least in his 60s.

“The welfare of our former service personnel is of the utmost importance,” Defence Minister Gavin Williamson said in a statement. “Our serving and former personnel cannot live in constant fear of prosecution.”

Irish Foreign Minister Simon Coveney said it was important that no one said anything to prejudice the process following Thursday’s decision, adding that his thoughts were with all of the families.

The Saville Report, which was published in 2010 after a 12-year inquiry by High Court Judge Lord Saville, reversed the findings of a hastily-convened inquiry from 1972 by another judge, Lord Widgery, who concluded the soldiers only fired after being fired upon.

The Bloody Sunday killings caused widespread anger at the time – not least in the United States, where support for the Irish Republican cause runs high – and nearly 50 years later the incident remains highly emotive.

Supporters of the paratroopers say they were acting under extremely confused and stressful conditions, and it is unfair to pursue them so long after the event when many suspected Irish Republican Army (IRA) bombers and gunmen have been told they will no longer face arrest under the 1998 peace accords.

Victims’ families and other voices say they must nonetheless be held to account for their actions.

The Saville Report said the paratroopers opened fire without warning and that none of the casualties has posed a threat.

The 1998 Good Friday Agreement brought a close to a conflict in which about 3,500 people were killed. British troops subsequently withdrew from the province, but tensions still persist and a car bomb exploded outside Londonderry’s main courthouse in January. No one was injured.

The decision to prosecute came a week after Britain’s minister for Northern Ireland, Karen Bradley, was forced to apologise for saying that killings by British soldiers and police were “not crimes”.

Sinn Fein, the former political wing of the IRA who are now the largest nationalist party in the province, said they shared the families’ disappointment and “sense of incredulity” at the decision.

“The decision to prosecute just one ex-soldier does not change the fact that Bloody Sunday was a massacre of innocents,” Sinn Fein’s Northern Ireland leader Michelle O’Neill said in a statement.

By In Cyprus
Previous articleEmployment in the broad public sector increases in 4th quarter of 2018
Next articleTwo women arrested in Limassol on suspicion of embezzling €120,000