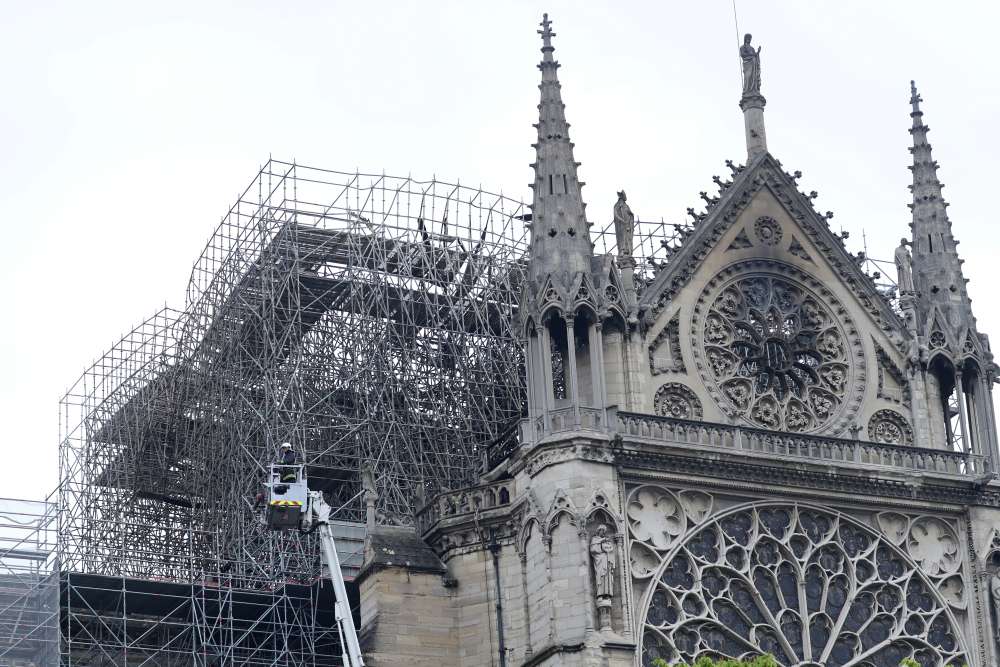 Firefighters doused the smouldering ruins of Notre-Dame with water on Tuesday, the morning after a raging inferno swept through the Gothic cathedral in the heart of Paris as investigators tried to establish what started the fire.

Hundreds of firemen battled the blaze which consumed the roof and collapsed the eight-centuries-old cathedral’s spire for more than eight hours before bringing it under control, saving its bell towers and outer walls.

Pockets of fire continued to burn inside the building and thorough checks on the cathedral’s structural soundness would be needed, junior interior minister Laurent Nunez said.

Firefighters who entered the burning cathedral saved many of its treasures, Riester said, although some paintings remained inside and risked smoke and water damage.

The fire tore through the cathedral’s timbered roofing, where workmen were carrying out extensive renovations to collapsed balustrades and crumbling gargoyles and the spire’s wooden frame.

Hundreds of stunned onlookers lined the banks of the Seine river as the fire raged, reciting prayers and singing liturgical music in harmonies late into the night as they stood vigil.

“We will rebuild it together. It will undoubtedly be part of French destiny and our project for the years to come,” Macron said outside the cathedral shortly before midnight.

France’s Fondation du Patrimoine, a charity which works to protect French heritage, is launching an international appeal to raise funds for the rebuilding that is likely to cost hundreds of millions of euros.

Other campaigns were swiftly launched in the United States as well-wishers around the world pledged contributions via social media.

“This tragedy strikes all the French and beyond all those who are attached to spiritual values,” Pinault said in a statement.

A centuries-old crown of thorns made from reeds and gold and the tunic believed to have been worn by Saint Louis, a 13th century king of France, were saved, Notre-Dame’s top administrative cleric, Monsignor Patrick Chauvet, said.

Copper statues representing the Twelve Apostles and four evangelists were removed by crane last week as part of the renovation work.

“We are talking of world history, of our Western culture but also of something that is truly universal,” Hargrove said. “Notre-Dame means something to everybody.”

By In Cyprus
Previous articlePaphos council reverses decision, supports cathedral in municipal park
Next articleHeavy rain and hail in many areas in Cyprus, snowfall in Troodos (photos, videos)