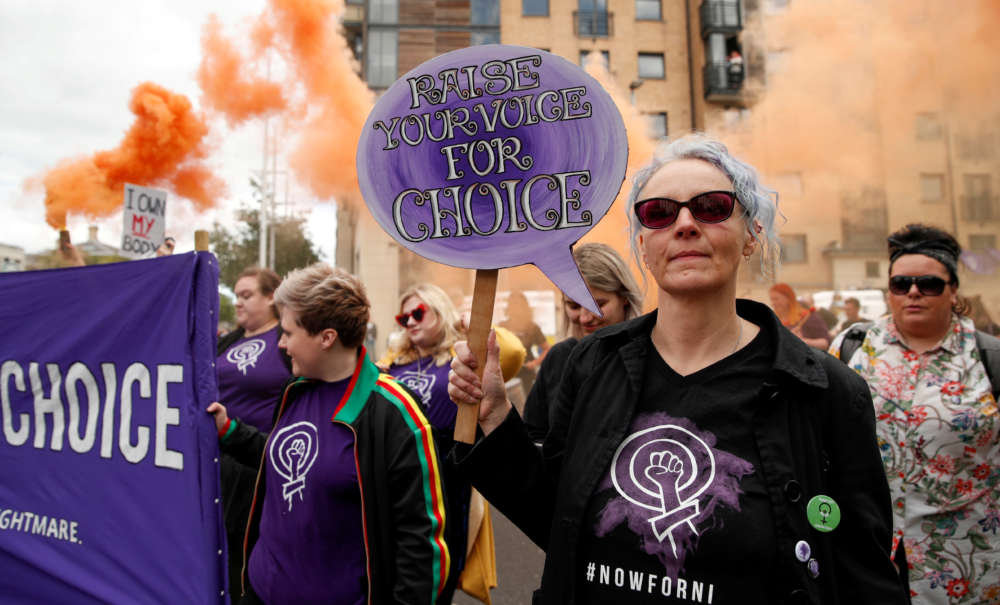 Campaigners who fought for decades to end Northern Ireland’s same sex-marriage ban and restrictions on abortion prepare on Monday for a momentous change to the laws on both at the stroke of midnight.

Northern Ireland is the only part of the United Kingdom that does not allow same-sex marriage. Also, unlike England, Scotland and Wales, laws in Northern Ireland forbid abortion except where a mother’s life is at risk, bans that have been upheld by the region’s block of conservative politicians.

But an overwhelming vote by British lawmakers in July to compel the government in London to overhaul the laws if Belfast’s devolved executive had not been restored by Oct. 21 is set to kick in with little or no hope of politicians ending the local parliament’s near three-year hiatus.

Advocacy groups have planned a number of events on Monday to usher in the changes.

“In 2014 when I needed an abortion and was denied one I swore I would add my voice to the campaign for abortion rights and to have achieved that is just incredible,” Ashleigh Topley, who was part of a Supreme Court challenge to the laws, said in a statement.

“This will never undo my experience but has given a purpose to my pain and I am relieved that no one will now have to go through what I did,” said Topley, who at 4-1/2 months pregnant was told that her baby would not survive but had to carry on against her wishes until she went into labour at 35 weeks and the baby girl’s heart stopped.

Abortion rights were long opposed in Northern Ireland by religious conservatives in both the Protestant community that supports continued British rule and the Catholic community that favours union with the traditionally Catholic Irish Republic.

Pressure has mounted, however, to change the Victorian-era laws in recent years, particularly after the neighbouring Irish Republic voted overwhelmingly last year to repeal a similarly restrictive ban, demonstrating a stark change in attitudes on an island once known for its religious conservatism.

If a new devolved government is not formed by midnight, abortion will be decriminalised, beginning a consultation on what the framework for services should look like, which is due to be finalised and approved by March 2020.

“This is a bad law being implemented through a bad process leading to bad consequences for both women and unborn children,” said Dawn McAvoy from the anti-abortion Both Lives Matter group.

Opinion has also changed on same-sex marriage. But despite opinion polls showing most in the region in favour, previous attempts to follow the Irish Republic in legalising it have been blocked by the socially conservative Democratic Unionist Party (DUP), using a special veto intended to prevent discrimination towards one community over another.

It will take the British parliament until mid-January to bring in the new legislation, setting up Feb. 14, 2020 – Valentine’s Day – as the first opportunity for same-sex couples to marry once they give the required 28-days’ notice.