‘No-deal’ Brexit? Britain sets out the damage for consumers and busines 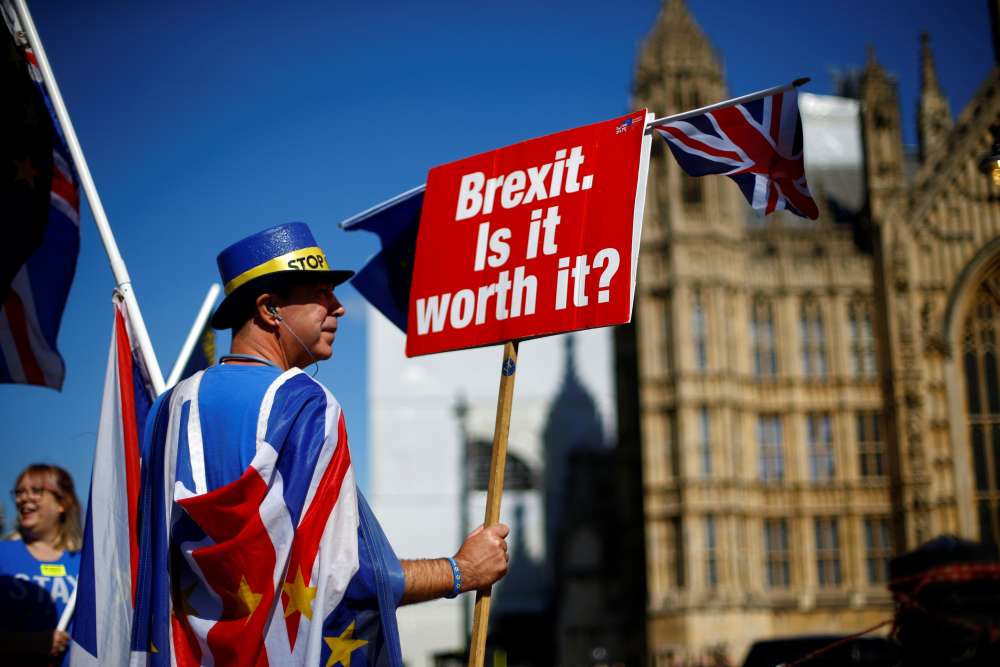 Britain published new advice to businesses and the public on Thursday about how to cope with the disruption that leaving the European Union without a divorce deal would cause to everything from data protection to driving licences.

But many business chiefs and investors fear politics could scupper a deal, thrusting the world’s fifth largest economy into a “no-deal” Brexit that they say would weaken the West, spook financial markets and silt up the arteries of trade.

Britain has stepped up planning for the effects of such a departure and on Thursday published 28 technical notices covering the impact on areas including environmental standards, mergers and certification for manufacturers.

Brexit minister Dominic Raab said a no-deal Brexit was unlikely, but that the United Kingdom would manage the challenges and eventually flourish.

“With six months to go until the UK leaves the European Union, we are stepping up our ‘no deal’ preparations so that Britain can continue to flourish, regardless of the outcome of negotiations,” Raab said.

The notices, often a few pages per sector, also covered the implications for space programmes, trading in drug precursors and reporting CO2 emissions for new cars.

For the public, Thursday’s notices covered more mundane issues; the government said British drivers might need to obtain an international driving permit to drive in the EU.

And for those seeking to travel to Europe with legal firearms there could be an additional headache: the European Firearms Pass would no longer be available for British citizens.

Both sides need an agreement to keep trade flowing between the world’s biggest trading bloc and the United Kingdom, home to one of the world’s top two financial capitals.

“Getting a deal with the European Union is still by far and away the most likely outcome,” Raab said.

But Moody’s Investor Service said the probability of a “no-deal” had risen and such a scenario would damage the economy, especially the automotive, aerospace, airline and chemical sectors.

The other 27 members of the EU combined have about five times the economic might of Britain. They also have a strong incentive to deny the UK a deal so attractive it might encourage others to follow the British example.

As May tries to clinch a deal with Brussels, she is facing rebels in her Conservative Party who say they will vote down any deal that fails to deliver a sharp break with the EU.

Raab, speaking to BBC radio, said he did not believe May’s government would lose a vote in parliament on the deal.

Last month, the government published 25 technical papers out of a total of more than 80, which detailed how tariffs, financial services, state aid and pharmaceuticals would operate if Britain departs without a divorce deal.

Ever since the shock 2016 Brexit vote, major companies have been planning for Brexit, but chief executives say the scale of disruption from a disorderly Brexit is such that it is hard to prepare for.

Profit at Britain’s biggest department stores group, John Lewis Partnership, was wiped out in the first half as it was forced to match discounting by its struggling rivals on a fiercely competitive high street.

“With the level of uncertainty facing consumers and the economy, in part due to ongoing Brexit negotiations, forecasting is particularly difficult,” John Lewis said.

Brexiteers accept there is likely to be some short-term economic pain but say Britain will thrive in the longer term if cut loose from what they see as a doomed experiment in German-dominated unity and excessive debt-funded welfare spending.

Opponents of Brexit fear that leaving the bloc will weaken what remains of Britain’s global influence, further undermine its reputation as a haven for investment and hurt the economy for years to come.

By In Cyprus
Previous articleEmployees in the broad public sector rose to 67,670 in Q2
Next articleRussians in UK spy case say they wanted to see cathedral