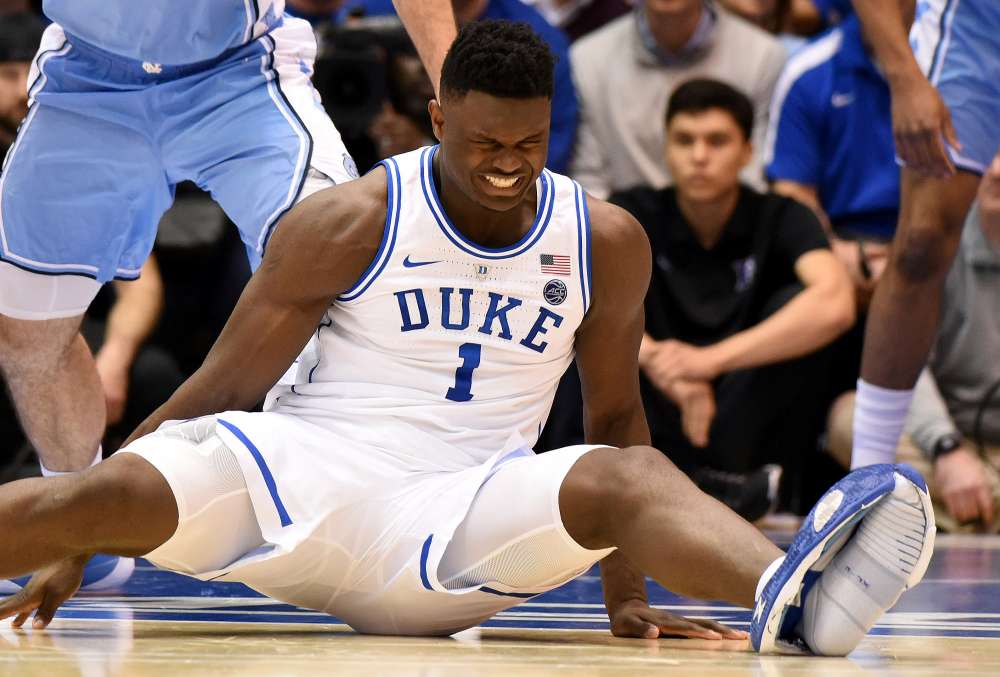 A Nike Inc sneaker worn by a college basketball superstar split in half less than a minute into a highly anticipated game between Duke University and North Carolina, prompting an outcry on social media as the company sought to figure out what caused the problem.

Zion Williamson, a 6-foot-7-inch freshman forward for the Duke Blue Devils who is anticipated to be the top 2019 NBA Draft pick, suffered a mild sprain to his right knee because of the incident on Wednesday night, according to his coach Mike Krzyzewski.

The official Duke Basketball Twitter handle (@DukeMBB) tweeted Thursday evening that Zion was “progressing as expected, and his status is day-to-day.”

A closeup video replay showed Williamson slipping and crumpling to the ground, clutching his knee in pain. His left shoe is seen split in half, with part of the sole ripped off the base of the sneaker.

Williamson did not return to play in the match-up, which ended with No. 1-ranked Duke losing 72-88 to the No. 8-ranked Tar Heels team.

“We are obviously concerned and want to wish Zion a speedy recovery,” Nike said in a statement. “The quality and performance of our products are of utmost importance. While this is an isolated occurrence, we are working to identify the issue.”

Shares of the sportswear maker closed down 1 percent on Thursday, a day after the incident, wiping off some $1.46 billion from Nike’s market capitalisation since Wednesday’s close.

Oppenheimer analyst Brian Nagel said in a note that he was optimistic “any lasting damage to the company and its shares will prove minimal.”

Williamson was wearing the Nike PG 2.5 basketball shoe when he was injured, Nike confirmed to Reuters in an email. The line of sneakers, launched in summer of 2018, sells for $95-$105 on Nike’s website.

The shoe received mixed reviews and a rating of 4 out of 5 stars on Nike.com as of Thursday.

Nike is Duke’s exclusive supplier of uniforms, shoes and apparel under a 12-year contract that was extended in 2015 and has had an exclusive deal with the private university since 1992, ESPN reported.

Williamson, who averaged 21.6 points a game, has been tipped as the “next Lebron James” and is expected to be selected first in the NBA Draft this June.

Krzyzewski said it was unclear how long Williamson would be out because of the injury.

A video from the match posted on Twitter showed Obama sitting courtside, expressing shock and mouthing the words, “his shoe broke!”

The incident lit up social media, with celebrities and some of basketball’s biggest stars expressing shock and dismay.

“Again let’s remember all the money that went into this game…. and these players get none of it,” Donovan Mitchell (@spidadmitchell), a former first-round NBA draft pick and current guard for the Utah Jazz, tweeted on Wednesday. “And now Zion gets hurt… something has to change.”

This is not the first time Nike has faced controversy over the craftsmanship of its sportswear. In 2017, the company faced a backlash when several NBA jerseys worn by basketball stars, including James, ripped apart.

By In Cyprus
Previous article€677 million in development spending untapped in 2018
Next articleEAC projects €35.6 m profit in 2019