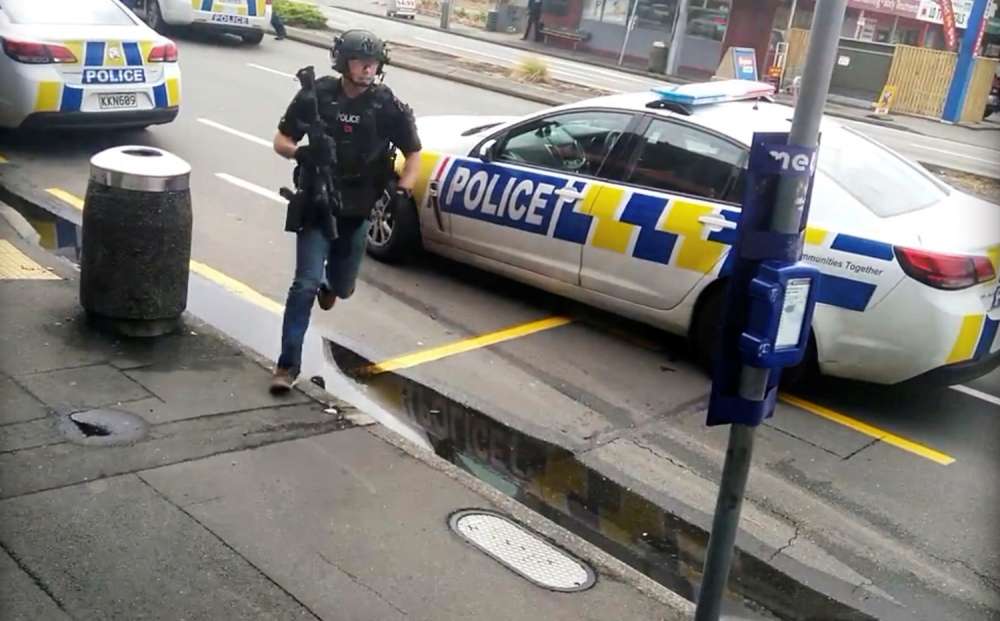 A gunman broadcast live footage on Facebook of the attack on one of the mosques. Police later said four people were in custody and one had been charged with murder over the country’s worst ever mass shooting.

On Wednesday, the Twitter handle @brentontarrant tweeted pictures of one of the guns later used in the mosque attacks in the city of Christchurch. It was covered in white lettering, featuring the names of others who had committed race- or religion-based killings; Cyrillic, Armenian and Georgian references to historical figures and events; and the phrase: “Here’s Your Migration Compact”.

The number “14” was written on the side of the rifle as well, a reference to the “fourteen words”, a white supremacist mantra.

Other tweets from the same user on that day included references to declining white fertility rates, articles about right-wing extremists in various countries and stories about purported crimes by illegal immigrants.

The Twitter profile had 63 tweets, 218 followers and was created last month.

A person involved with the attacks also appeared to post regularly to the “/pol/ – Politically Incorrect” forum on 8chan, a online discussion site known for allowing virtually any content, including hate speech.

About 1:30 p.m. (0030 GMT) on Friday, the anonymous user told the group “I will carry out and attack against the invaders, and will even livestream the attack via Facebook”; approving responses to the post included Nazi images and memes.

The post featured a link to a 74-page manifesto that said he was motivated by “white genocide”, a term white supremacists use to describe immigration and the growth of minority populations. It also linked to a Facebook page for a user called brenton.tarrant.9, where the attack was livestreamed.

“Police alerted us to a video on Facebook shortly after the livestream commenced and we quickly removed both the shooter’s Facebook and Instagram accounts and the video,” Facebook tweeted. “We’re also removing any praise or support for the crime and the shooter or shooters as soon as we’re aware.”

YouTube, which is owned by Google, tweeted: “Our hearts are broken over today’s terrible tragedy in New Zealand.”

A Twitter representative said the social media company was “deeply saddened” by the shootings.

“Twitter has rigorous processes and a dedicated team in place for managing exigent and emergency situations such as this,” the company said in an emailed statement. “We also cooperate with law enforcement to facilitate their investigations as required.”

Nolwenn Bervas, lead terrorism analyst at the Risk Advisory Group, said the were numerous places around the internet for people such as the Christchurch attacker to congregate.

“The amount of information and propaganda linked to the far-right, far-left or jihadism is extensive and accessible,” Bervas said. “One of the Christchurch perpetrators posted his manifesto online before the attack where he wrote that he received/researched/developed his beliefs on the Internet, adding ‘You will not find the truth anywhere else’. He cited people like Dylan Roof or Anders Breivik as inspirations, who also researched and developed their beliefs online.”

Anwita Basu, an analyst at the Economist Intelligence Unit, said social media had shifted global security risks. “More than anything, social media has provided a platform for sharing extremist views.”

When the attack began on Friday, one anonymous 8chan user remarked: “actually happening. delete this thread now or its gonna be the end of 8pol.”

The Facebook livestream of the attack, apparently recorded with a head-mounted camera, began about 1:40 p.m. local time. The attacker plays music as he drives to the mosque, including a British grenadiers march and a Serbian anti-Muslim hate anthem called “Remove Kebab”.

Once he arrives in the Hagley Park district of Christchurch, the attacker parks the car and opens the rear hatch, revealing a cache of guns, ammunition and what appear to be red fuel containers.

Picking up two guns, both covered in names and slogans, he walks around the corner to the entrance of a mosque and begins shooting.

The livestream ended less than 20 minutes later. The suspected shooter was arrested about 3 p.m.

“Do you feel any remorse for the attack”? the author asks self-referentially in the manifesto. “No. I only wish I could have killed more invaders, and more traitors as well.”