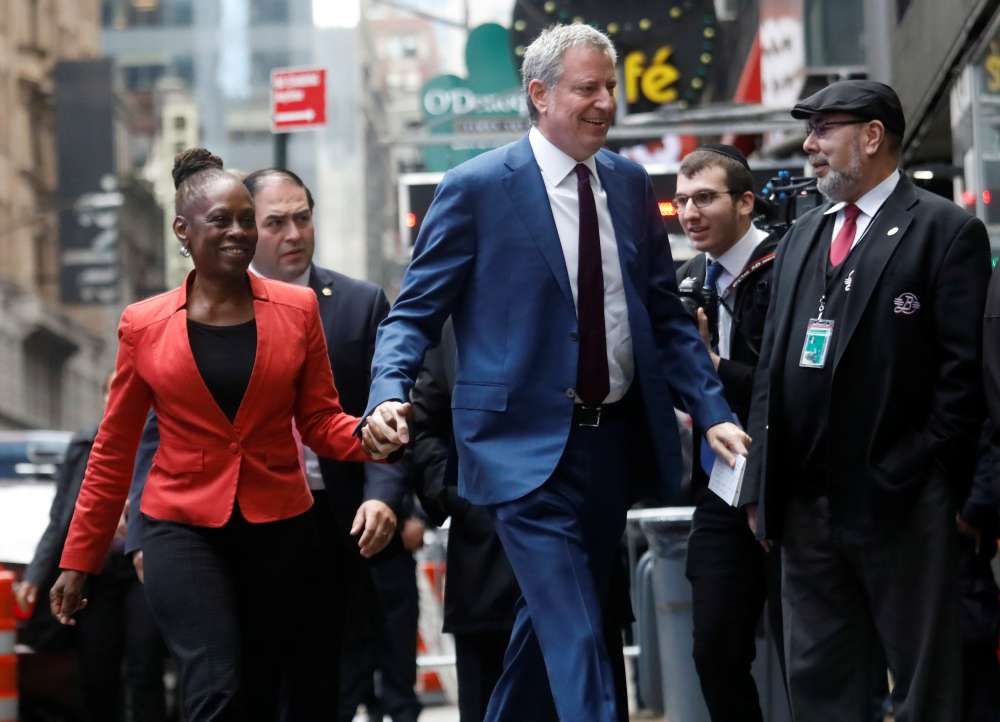 New York City Mayor Bill de Blasio entered the crowded 2020 presidential race on Thursday, arguing that his record of progressive accomplishments in the country’s biggest city positioned him as the perfect foil to President Donald Trump.

De Blasio, 57, launched his candidacy with the central campaign message, “Working People First,” becoming the 24th Democrat seeking to take on Trump in the election next year.

In a video released on Thursday, de Blasio returned to the theme of income inequality that had animated his first mayoral campaign in 2013, when he emerged as a leading voice for the burgeoning left wing that has since reshaped his party.

“People in every part of this country feel stuck or even like they’re going backwards,” he said in the video. “But the rich got richer.”

The mayor, who is barred from seeking a third four-year term in 2021, has struggled to build a national profile, eclipsed in the national consciousness by progressive U.S. senators Bernie Sanders and Elizabeth Warren, who are now his rivals for the presidency.

He is scheduled to travel this weekend to Iowa and South Carolina, which host key early nominating contests, to begin campaigning.

De Blasio emphasised a list of progressive wins under his leadership, including universal pre-kindergarten, a $15 minimum wage and paid sick leave, all in a city that has a bigger population, more than 8 million, than most U.S. states.

He also promised to stand up to fellow New Yorker, Trump.

“Don’t back down in the face of a bully,” he said. “Confront him and take him on.”

In typical fashion, Trump hit back on Twitter on Thursday, calling de Blasio “the worst mayor in the U.S.”

De Blasio is the third New York City mayor in a row to flirt with a presidential bid.

Former Republican Mayor Rudy Giuliani, who left office in 2001 and is Trump’s personal lawyer and close confidant, ran unsuccessfully for president in 2008.

Former Mayor Michael Bloomberg has seriously considered running several times, both as an independent and a Democrat. In March, the billionaire announced he would not seek the White House and would, instead, use his fortune to launch an effort against climate change.

Most New Yorkers appear unenthusiastic about de Blasio’s presidential aspirations. A Quinnipiac University poll in April found more than three-quarters of New Yorkers did not feel he should make a White House bid.

Like Biden, de Blasio is a white heterosexual man running in a party that values diversity in its candidates.

But he has consistently polled better among African-Americans in New York, and he is married to a black woman, Chirlane McCray, a poet and activist who describes her sexual orientation as fluid.

His popularity took a hit after a federal investigation found the mayor made inquiries to city agencies on behalf of donors, though it cleared him of criminal wrongdoing. De Blasio has denied misconduct, saying he acted appropriately at all times.

De Blasio has sharply criticised Trump on issues like climate change, immigration and policing. On Monday, he held a news conference inside Trump Tower to call on the Trump Organisation to meet newly enacted emissions standards in their skyscrapers, or face significant fines.

The event drew insults on Twitter from Trump’s two oldest sons, Eric and Donald Jr., who run the family company.