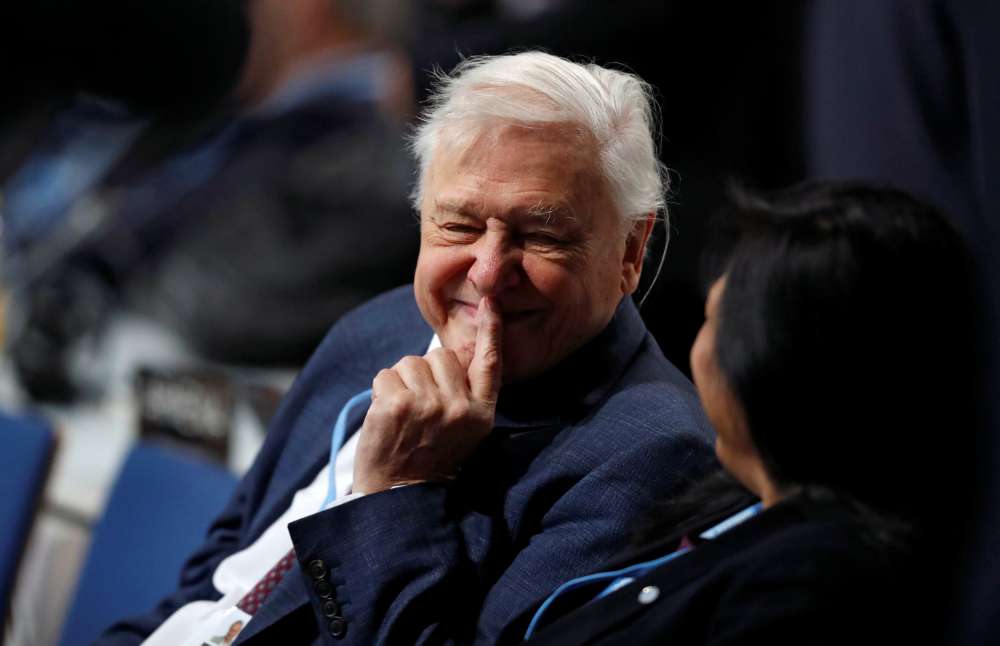 British broadcaster and environmentalist David Attenborough on Monday urged world leaders, meeting in Poland to agree ways to limit global warming, to get on and tackle “our greatest threat in thousands of years”.

Known for countless nature films, Attenborough has gained prominence recently with his “Blue Planet II” series, which highlighted the devastating effect of pollution on the oceans.

“Leaders of the world, you must lead,” said the naturalist, given a “People’s seat” at the two-week U.N. climate conference in the Polish coal city of Katowice alongside two dozen heads of state and government.

“The continuation of our civilisations and the natural world upon which we depend, is in your hands,” he said.

The world is currently on course to overshoot by far the limits for global warming agreed in the landmark 2015 Paris accord on climate change, which were intended to prevent more extreme weather, rising sea levels and the loss of plant and animal species.

The Katowice talks are billed as the most important U.N. conference since Paris, coming ahead of an end-of-year deadline to agree a “rule book” on enforcing action.

Yet political and U.N. leaders have been struggling to inject urgency into two weeks of haggling on how to move on from fossil fuels to give practical effect to the Paris accord.

Representatives of some of the most powerful countries and biggest polluters were conspicuous by their absence, and the United States is quitting the U.N. climate process.

To maximise the chances of success in Poland, technical talks began on Sunday, a day early, with delegates from nearly 200 nations debating how to meet the Paris target of limiting global warming to between 1.5 and 2.0 degrees Celsius (2.7 and 3.6 Fahrenheit).

“WAVE OF OPTIMISM HAS BROKEN”

Michal Kurtyka, Poland’s deputy environment minister and president of the talks, said that without success in Katowice, Paris would not be a success, as it had only decided what was needed, not how it could be done.

“The wave of optimism and global cooperation that carried us to and through Paris has now crested, broken and is now tumbling,” he told delegates.

He nevertheless took heart from a G20 statement at the weekend when the leading industrialised nations – except the United States – reaffirmed their commitment to implementing the Paris deal.

A series of reports in the run-up to the Katowice conference have made clear the widening gap between high-level rhetoric and actual work to cut emissions, which have continued to rise.

“It is hard to overstate the urgency of our situation,” U.N. Secretary General Antonio Guterres said.

“Climate change is running faster than we are and we must catch up sooner rather than later before it is too late.”

Attenborough told the delegates: “Right now, we are facing a man-made disaster of global scale. Our greatest threat in thousands of years. Climate Change.”

Yet expectations for Katowice are low.

The host nation Poland is committed to coal, the most polluting of fossil fuels. It is calling for a “just transition” to provide help for communities dependent on fossil fuels.

Riots in Paris at the weekend, partly in protest at fuel taxes, also illustrate the conundrum: how do politicians introduce long-term environmental policies without inflicting costs on voters that may damage their chances of re-election?

To contain warming at 1.5C, man-made global net carbon dioxide (CO2) emissions will need to fall by about 45 percent by 2030 from 2010 levels and reach “net zero” by mid-century, according to the U.N. Intergovernmental Panel on Climate Change (IPCC).

Delegates at the talks said sticking points were likely to include finance and the level of scrutiny associated with monitoring individual nations’ emissions.

The U.N. has a goal of raising $100 billion every year from 2020 for climate action. To inject momentum, the World Bank Group on Monday said it would provide a further $200 billion over five years from the start of the next decade.