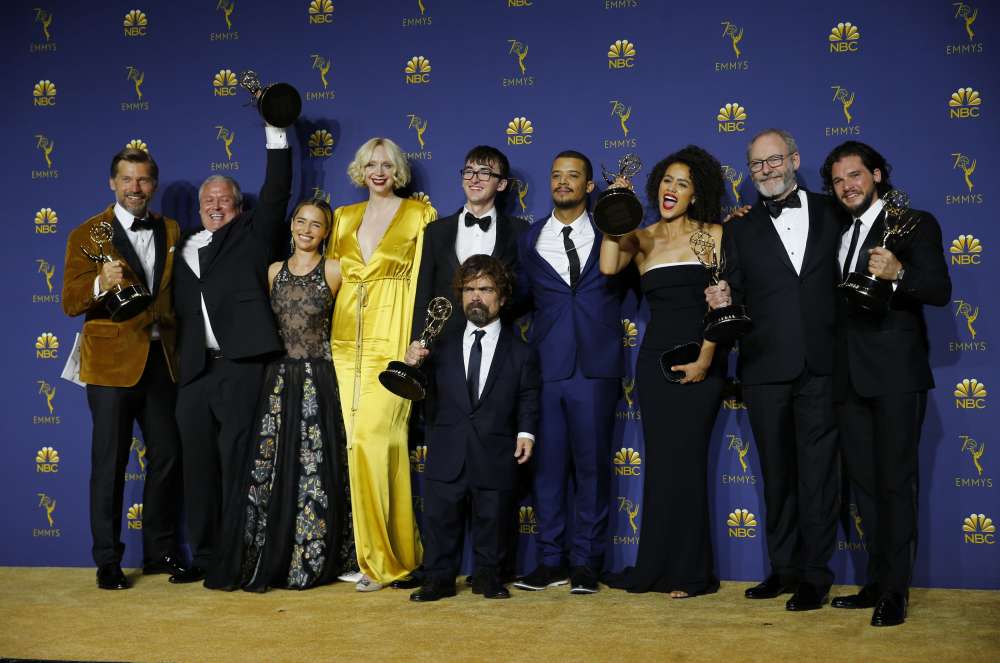 “Game of Thrones” and “The Marvelous Mrs. Maisel” won the top prizes at the Emmy awards last night on a night of upsets for the highest honours in television and a triumph for streaming services.

Dystopian female show “The Handmaid’s Tale” and FX’s surreal hip-hop comedy “Atlanta” were the biggest losers, taking none of the most prestigious awards and making a disappointing night for stars Elisabeth Moss and Donald Glover.

Netflix, which had a leading 112 nominations going into the Emmys, ended up tying HBO for the most wins, with 23 apiece.

Amazon’s “The Marvelous Mrs. Maisel,” about a 1950s housewife who turns to stand-up comedy, took home the Emmy for best comedy series. “Mrs. Maisel” also won a total of seven other awards, including best actress for Rachel Brosnahan.

Claire Foy beat Moss to win for her quiet but formidable portrayal of Queen Elizabeth in Netflix drama “The Crown.”

“This wasn’t supposed to happen,” said a surprised Foy.

“Saturday Night Live” won, as expected, for variety sketch series, taking its lifetime Emmy total to a record-setting 72 wins since 1975.

Emmy hosts Michael Che and Colin Jost from “Saturday Night Live” sprinkled the evening with skits and jokes about diversity on television, sexual misconduct in the entertainment industry, and the power of streaming services like Amazon and Netflix.

“It is an honour to be here sharing this night with the many, many talented and creative people in Hollywood who haven’t been caught yet,” Che said, alluding to the dozens of men who have been fired or forced to resign in the past year because of sexual harassment allegations.

“We solved it!” sang a line-up of celebrities, giving themselves a tongue-in-cheek pat on the back for the strides television has made for women, people of colour, and gay men and women behind and in front of the camera.

But despite one of the most ethnically diverse array of nominees, only Regina King (“Seven Seconds”) Thandie Newton (“Westworld”) and RuPaul (“RuPaul’s Drag Race”) made it to the winners podium.

“I don’t even believe in God, but I am going to thank her tonight,” Newton said.

Other big winners included “The Assassination of Gianni Versace,” for best limited series and actor Darren Criss, who played the gay serial killer who murdered the Italian designer in Miami in 1997. Creator Ryan Murphy dedicated the Emmy to the LGBT community.

“Barry” also brought honours for veteran Henry Winkler, winning a standing ovation and his first-ever Emmy for his supporting role as a self-important acting teacher.

Yet the warmest applause came when Glenn Weiss used his acceptance speech for directing the televised 2018 Academy Awards show to propose to his girlfriend in the audience, Jan Svendsen. She said yes.