Mitsotakis and Tsiodras sound alarm over rise in coronavirus cases, especially in Attica 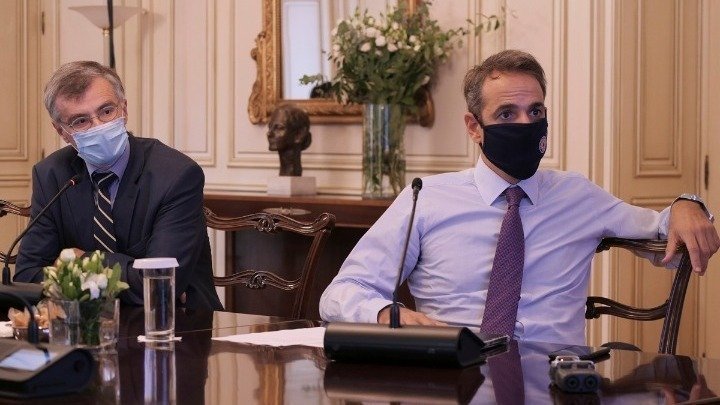 Prime Minister Kyriakos Mitsotakis and the health ministry’s representative for the novel coronavirus pandemic, epidemiology expert Dr. Sotiris Tsiodras, sounded the alarm over the spread of the virus in Attica, especially districts within the centre of Athens on Friday.

“The government is prepared to impose additional measures to contain the spread of coronavirus in Attica”, the prime minister underlined, after the regular meeting to discuss the progress of the pandemic concluded.

Mitsotakis said he was absolutely ready, following Friday’s recommendation by the expert committee, “to take some additional measures with respect to public gatherings, the suspension of cultural events for 14 days and measures that encourage teleworking in the public and private sector, in order to restrict unnecessary movements”.

The prime minister noted that the government must make sure that the measures it takes are, first and foremost, applicable, sufficiently and convincingly explained and, finally, they must be measures that are taken in order to avoid other harsher measures that could have a deeper economic impact, which the Greek economy and Greek society are not capable to withstand at this time.

He also expressed his confidence that Greece will do very well if the measures taken are implemented, “but in order to be certain, we must first focus on their implementation”, he added.

Mitsotakis also stressed that the measures already in force must be strictly observed, such as the use of masks, especially on public transport.

The prime minister urged vulnerable members of the public to exercise increased caution, while government sources said the problems were mainly focused in Attica and especially certain districts in central Athens, where additional control measures are being examined, especially for vulnerable groups.

Despite the increase in the number of ICU patients, the meeting was told, the national health system was not facing a shortage of ICUs at this time.

Tsiodras said that a second wave of the pandemic was underway throughout the world, while he also focused on the problems in Attica, noting that various factors “place Attica in the orange zone”.

“The number admitted to hospital is now 554, it is at roughly 20 to 30 percent bed capacity depending on the area one looks at. This is one of the indicators that lead to taking additional measures…with respect to areas of Attica”, he added.

By In Cyprus
Previous articleGovernment finds itself in hot water after rejecting budget for contract soldiers
Next articleThere will be covid cases at schools but an outbreak must be avoided, Dr. Pana says