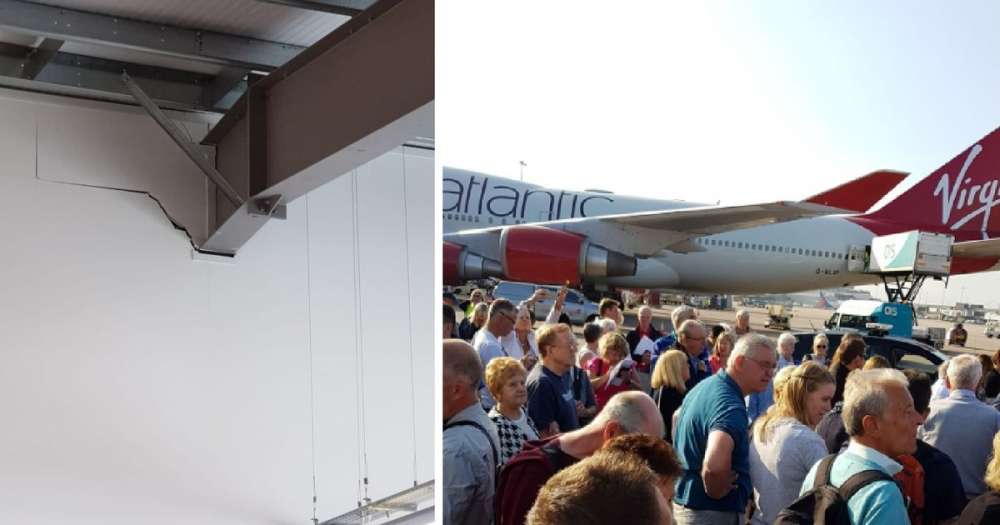 Passengers have been evacuated from a section of Manchester Airport after reports the floor began to ‘collapse’. Photos shared on Twitter show a crack which appeared beside a metal beam where travellers were boarding a flight to Palma at gate 212 in Terminal Two. The airport say another crack has appeared in the floor which is causing the issue.

The fire service were called to the scene and passengers were evacuated from the gate as a safety precaution. Gate 212 is housed inside a temporary building while work is taking place at the airport. Passengers said they heard a loud noise at around 7am and began to panic. They were then evacuated onto the airfield and airport staff then explained what was happening.

The incident is only affecting passengers travelling from gate 212 and is not having an impact on other flights, the airport said. A spokesman for the airport said the gate was evacuated due to a crack in the floor and not the wall. They added: “A small crack appeared in the floor. We have evacuated one flight as a precaution in that area.”

One passenger told the M.E.N: “About an hour ago there was a loud noise. Everyone was panicking. It looks like something is wrong with the building, it is collapsing. “The fire brigade have evacuated the building. They didn’t tell anybody what was going on.

“We are now stood outside on the airfield. The fire brigade made everybody move away from the building.”

Andrea Atherton shared an image of a crack inside the temporary building. She tweeted: “Been stood for 20 minutes where the temporary floors sound like they are collapsing. Finally evacuated outside. Trying to go on my cruise. Not great communication Manchester airport.”

The airport say the evacuation is not expected to delay or affect any other flights.