The northeastern United States was walloped by a fierce winter storm on Saturday that dropped more than two feet (60 cm) of snow on some areas while packing high winds, prompting thousands of flight cancellations and leading governors in Rhode Island and other states to curtail access to the roads.

Nearly 11 million people along the East Coast remained under blizzard warnings from the Nor’easter, according to the National Weather Service, including the Boston metropolitan area, which was forecast to be hit with up to 25 inches (64 cm) of snow. The storm blanketed a large swath of New England with snow.

Most Boston area residents heeded warnings to stay indoors as snow, whipped by wind gusts forecast by the National Weather Service to reach 43 miles (69 km) per hour, continued to fall in small, dense flakes on Saturday afternoon, challenging the hundreds of plows out making an effort to stay ahead of the storm.

“This is going to be a historic blizzard,” Boston City Councilor Ruthzee Louijeune told Reuters. “It’s the power of the wind and the amount of snow that makes this one particularly dangerous.”

Several states declared emergencies in response to the storm, which formed in the Atlantic Ocean off the Carolinas and was forecast to continue depositing snow into Sunday morning as it moved north to Maine.

Coastal areas across Massachusetts were being hit especially hard, including some flooding along the shoreline, as the center of the storm hovered just east of the Cape Cod resort area by Saturday mid-afternoon.

“It’s high winds, heavy snow, blizzard conditions – all the elements of a classic Nor’easter,” New York Governor Kathy Hochul said at a news briefing, warning of frigid temperatures overnight and the risk of power outages, which could prompt some residents to use their stoves or space heaters to stay warm. 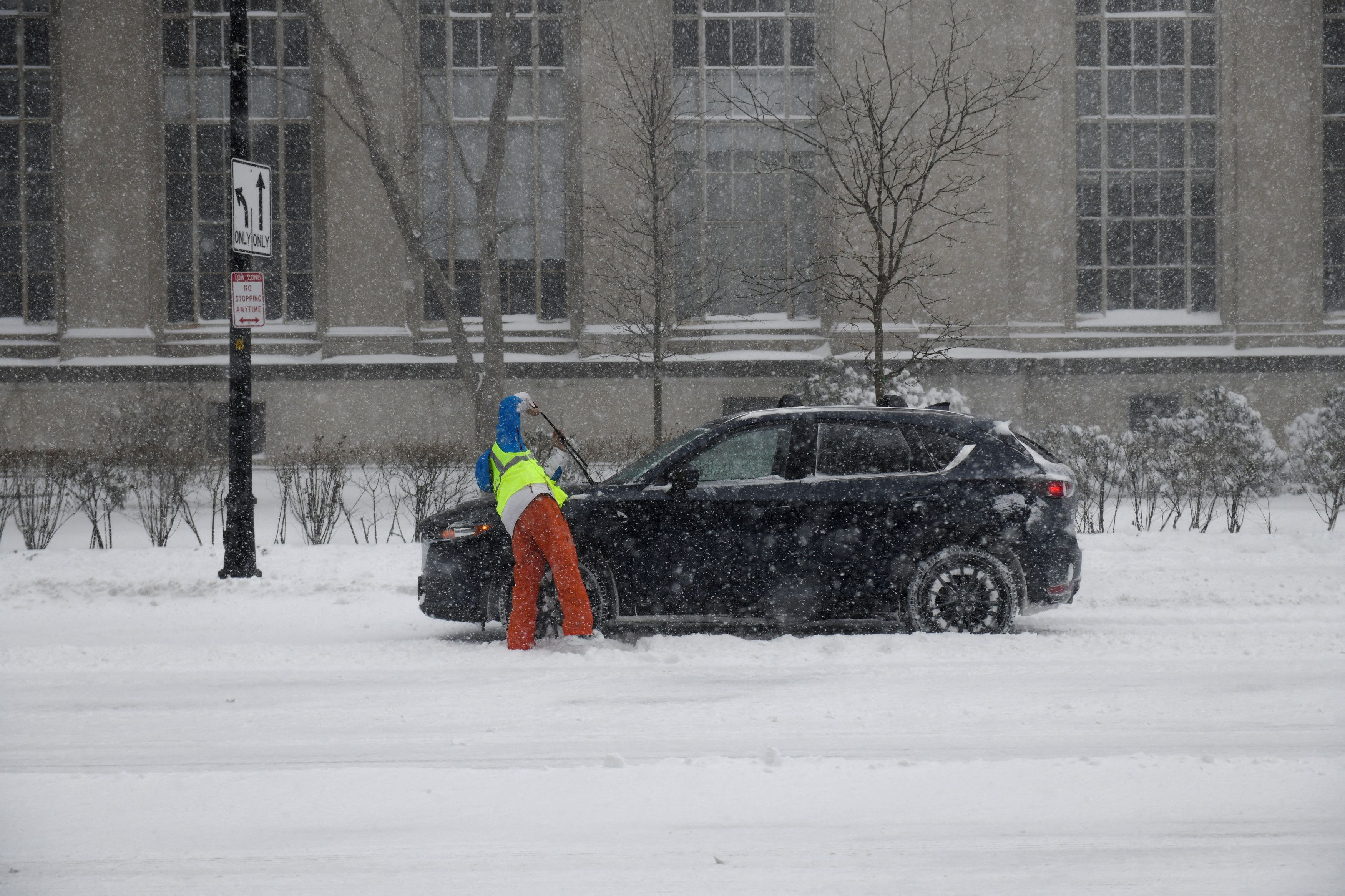 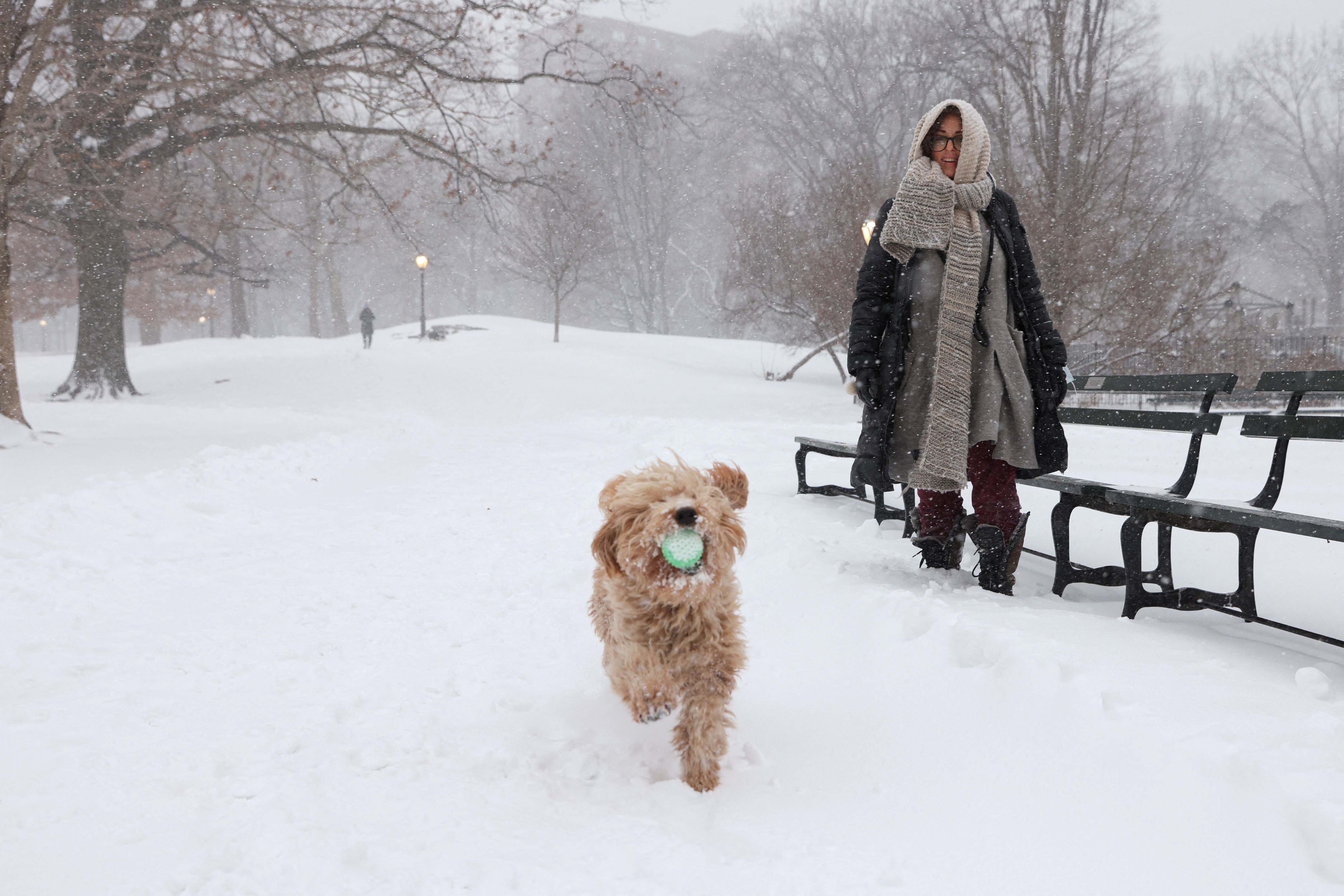 “This could be life-threatening,” Hochul said.

Predicting up to two feet of snow in his state, Rhode Island Governor Dan McKee issued a statewide travel ban for all passenger cars and joined surrounding states in banning tractor-trailers from the roads.

The storm prompted airlines to cancel nearly 6,000 flights through the weekend, Amtrak to halt its passenger rail service across much of the region, and the main commuter line for Long Island to suspend its operations for at least one full day.

So far power outages were limited in most of the impacted states with the exception of Massachusetts, where 123,000 out of 2.6 million customers were without electricity, according to PowerOutage.us.

Speaking with reporters at around noon (1700 GMT) on Saturday, Hochul said the storm had not progressed as quickly as forecast, pushing back the state’s timetable for cleaning up. Hochul predicted that the most severely impacted counties – Nassau and Suffolk with 7 to 11 inches (18-28 cm) of snow – would get another 5 to 12 inches (13-30 cm) by 6 p.m.

The weather may have contributed to the death of an elderly woman who was found early on Saturday morning in a hotel parking lot in Uniondale with her car window open, according to an officer at the Nassau County Police Department in Long Island.

The storm hit nearly 44 years to the day after a monstrous blizzard crippled New England in 1978. Dumping more than 27 inches (70 cm) of snow on Boston, that storm killed dozens of people, trapped others in their homes and shut down major highways for a week.

By Constantinos Tsintas
Previous articleFlood of Saturday night covid violations, with more than 20 thousand in fines
Next articleN.Korea caps month of tests with longest-range missile since 2017