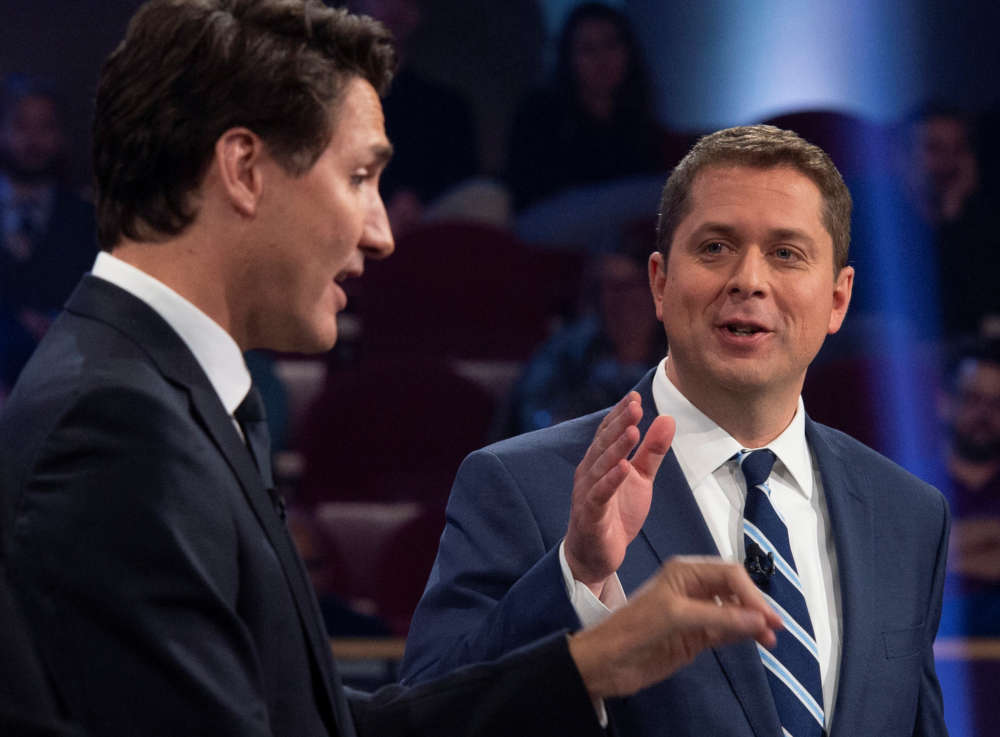 Canada’s main opposition leader repeatedly attacked Prime Minister Justin Trudeau on Monday during a pivotal televised debate, calling him a phony and a fraud who did not deserve to be re-elected on Oct. 21.

Opinion polls show Andrew Scheer’s Conservatives with a real chance of defeating the ruling Liberals, whose campaign stumbled last month after images from years ago emerged showing Trudeau in blackface. Trudeau has repeatedly apologized for the images.

The two-hour debate – the only one to be held in English, the language spoken by two-thirds of Canada’s 38 million population – has traditionally been regarded as an important way of winning the minds of voters.

In one of the few truly memorable moments, Scheer noted the Liberal leader had not at first disclosed how many times he had put on dark makeup.

“He can’t even remember how many times he put blackface on, because the fact of the matter is he’s always wearing a mask,” said Scheer.

“Mr. Trudeau, you are a phony and you are a fraud and you do not deserve to govern this country.”

The debate format – which grouped six party leaders on one stage – meant Trudeau could not respond directly to the remarks. During the evening, participants often talked over one another and were sometimes hard to understand.

Trudeau came under frequent attack from his rivals and stumbled on occasion over his words.

The Liberal leader, turning to face Scheer, accused him of trying to give tax breaks to Canada’s richest people.

“You did not answer the question on why you are lowering taxes by C$50,000 for multimillionaires,” Trudeau told his rival, whom he accuses of harboring an extreme right-wing agenda.

Scheer also blasted Trudeau for a watchdog’s ruling that the prime minister and his team inappropriately tried to help a construction company in the predominantly French-speaking province of Quebec avoid a corruption trial.

“When did you decide that the rules don’t apply to you?” he asked Trudeau.

Scheer is facing questions about why he did not disclose he has dual Canadian-U.S. citizenship.

One person outside the debate venue held a sign that read: “Make Andrew Canadian Again” – a play on the “Make America Great Again” slogan championed by U.S. President Donald Trump.

A Nanos Research poll for CTV and the Globe and Mail on Monday put the Liberals at 34.3% and the Conservatives at 33.4%, in contrast to surveys that showed Trudeau falling behind after the blackface scandal broke on Sept. 18.

Trudeau has gained momentum since Scheer stumbled through a French-language debate on Wednesday. During that event, Trudeau went on the offensive against Scheer.

Quebec accounts for 78 of the 338 seats in the House of Commons. The leaders will also face off in a second French-language debate on Thursday.

By In Cyprus
Previous article
‘Buckle up’: Abrupt Syria policy shift is sign of Trump unchained
Next article
€1100 stolen from Athienou home