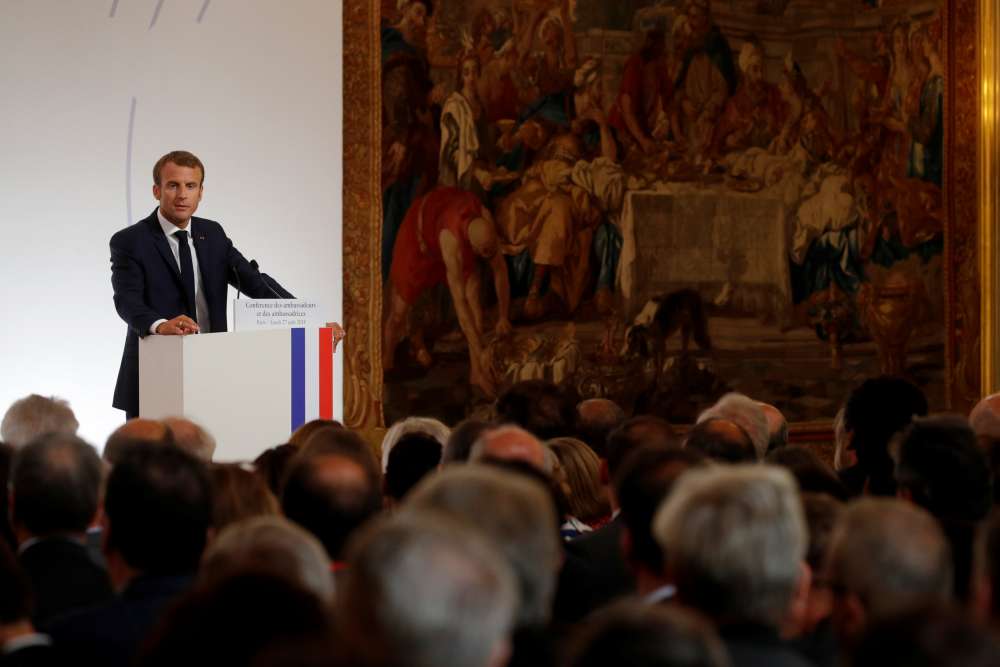 Macron, who met Prime Minister Theresa May for talks on Britain’s departure from the EU during the summer holiday, said he wanted to reach a Brexit deal by the end of the year and showed no signs of breaking ranks with other EU capitals.

“France wants to maintain a strong, special relationship with London but not if the cost is the European Union’s unravelling,” he told a gathering of French ambassadors.

Brexit, Macron said, “is a sovereign choice, which we must respect, but it can’t come at the expense of the European Union’s integrity.”

In a one-and-a-half hour speech outlining his diplomatic priorities for the year ahead, Macron made no major policy shifts, but spoke forcefully on what he labelled the “crisis of multilateralism” and the need to make Europe more “sovereign”.

Macron called on Europe to be “a trade and economic power”, which defends its strategic interests and financial independence with tools that can fend off U.S. extraterritorial sanctions.

“Multilateralism is going through a major crisis which collides with all our diplomatic activity, above all because of U.S. policy,” he said.

“The partner with whom Europe built the new post-World War order appears to be turning its back on this shared history,” he said.

In his first year, Macron banked on nurturing relationships with awkward leaders such as U.S. President Donald Trump and Russian leader Vladimir Putin, appearing engaged on the world stage but often remaining non-committal and trying to mediate without unsettling anyone.

That approach has been tested after Trump shunned Macron and other allies, pulling out of a global climate pact, imposing extraterritorial sanctions on Iran, and imposing tariffs on EU steel and aluminium.

In Syria, despite French strikes, the French leader has had little influence over Putin.

Meanwhile, French forces’ operations to combat an Islamist uprising in West Africa, started under Macron’s predecessor and made a priority by the 40-year old, have struggled to root out jihadists in Mali and neighbouring countries.

By In Cyprus
Previous articleVolunteerism Council sends humanitarian aid to fire-stricken residents of Attica
Next articleReports: Prickly pear in occupied Cyprus in danger from insect infestation