Kirk Douglas, Hollywood’s tough guy on screen and off, dead at 103 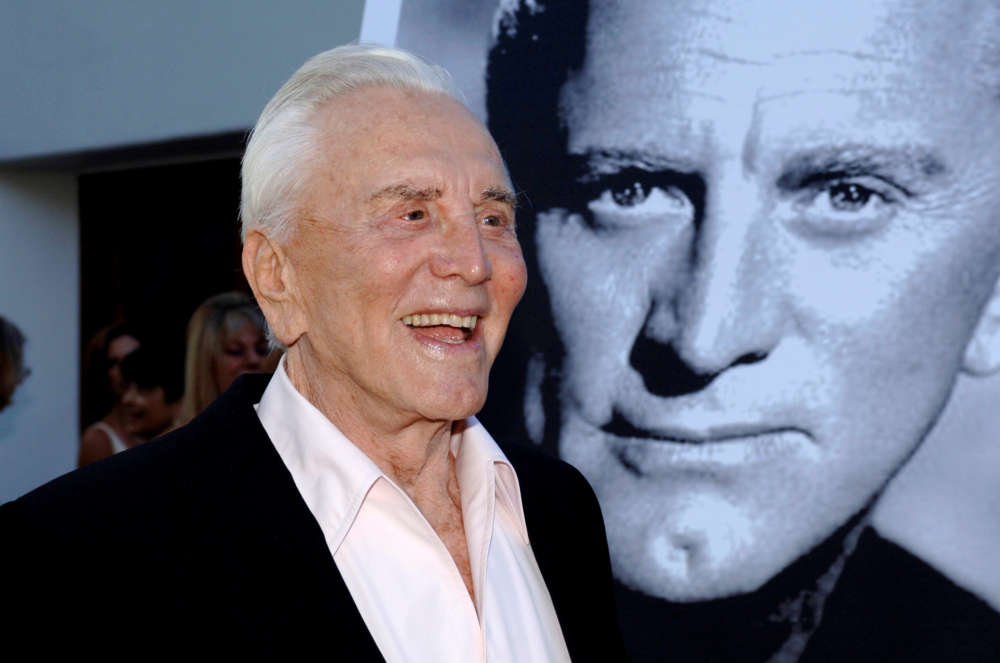 Kirk Douglas, the cleft-chinned movie star who fought gladiators, cowboys and boxers on the screen and the Hollywood establishment, died on Wednesday at the age of 103, his son Michael Douglas said.

“It is with tremendous sadness that my brothers and I announce that Kirk Douglas left us today at the age of 103,” Michael Douglas said in a statement to People magazine and on his Facebook page.

“To the world, he was a legend, an actor from the golden age of movies who lived well into his golden years, a humanitarian whose commitment to justice and the causes he believed in set a standard for all of us to aspire to,” Douglas added.

“Kirk’s life was well lived, and he leaves a legacy in film that will endure for generations to come, and a history as a renowned philanthropist who worked to aid the public and bring peace to the planet,” Michael added, saying he was “so proud” to be his father’s son.

Douglas made more than 90 movies in a career that stretched across seven decades and films such as “Spartacus” and “The Vikings” made him one of the biggest box-office stars of the 1950s and ’60s.

He also played a major role in breaking the Hollywood blacklist – actors, directors and writers who were shunned professionally because of links to the communist movement in the 1950s. Douglas said he was more proud of that than any film he made.

Tributes poured in from Hollywood. Actor and director Rob Reiner said on Twitter that Douglas “will always be an icon in the pantheon of Hollywood. He put himself on the line to break the blacklist.”

Mitzi Gaynor, who appeared with Douglas in the 1963 movie “For Love or Money,” said the film would “always hold a special place in my heart.”

“Thank you for so generously sharing your amazing talent with all of us,” Gaynor tweeted.

Danny DeVito called him an “inspirational Scallywag,” while Ed Asner tweeted “I will always be in your awe.”

A stroke in 1996 at age 80 left Douglas with slurred speech and damaged facial nerves. But two weeks later he showed his spirit by attending the Academy Awards ceremony to receive a Lifetime Achievement Award. He also continued to take small acting roles through 2008 but said the stroke left him suicidal.

“Humor saved me,” Douglas told Parade magazine in 2014. “At first, I thought my life was at an end. But when I put the gun in my mouth, it hit a tooth. Ow! And that struck me funny. A toothache was stopping me from committing suicide?”

In one of his last public appearances, Douglas was frail and barely audible in a wheelchair as he helped daughter-in-law Catherine Zeta-Jones present the Oscar for best screenplay in January 2018. In November of that year he joined his son Michael as the younger Douglas was honored with a star on the Hollywood Walk of Fame.

Douglas had a distinctive chin, razor-sharp cheekbones and a jutting jaw – looks that he passed along to Michael – and that made him a natural for playing all manner of rugged characters.

He also had a demanding nature that earned him a reputation in his prime as the actor who directed directors. Long-time friend and sometime co-star Burt Lancaster loved to introduce him by saying, “Kirk would be the first to admit he is a difficult person. (Pause) I would be the second.”

“I make my own way,” Douglas once told an interviewer. “Nobody’s my boss. Nobody’s ever been my boss … I’ve been a maverick.”

Douglas said playing Vincent van Gogh in “Lust for Life” (1956) was his favorite role but “Spartacus” (1960) was his favorite film because, as producer, he took a big step toward breaking the Hollywood blacklist.

The lifetime Oscar was Douglas‘ only Academy Award even though he was nominated for playing ruthless boxer Midge Kelly in “Champion” (1949), a movie executive in “The Bad and the Beautiful” (1952) and van Gogh in “Lust for Life.”

Douglas‘ first movie was “The Strange Love of Martha Ivers,” in 1946 after being suggested for the part by acting school classmate Betty Joan Perske, who became famous after changing her name to Lauren Bacall.

Douglas was known for powerful performances as characters who had to endure intense on-screen pain. He was stabbed in “Ace in the Hole,” crucified in “Spartacus,” lost an eye in “The Vikings,” an ear in “Lust for Life,” and a finger in “The Big Sky.”

His other notable movies were “Lonely Are the Brave,” “The Devil’s Disciple,” “Victory at Entebbe” and “Tough Guys,” which he made with Lancaster in 1986.

Douglas‘ independent streak led him to set up Bryna Production Co, which he named after his mother, in 1955, snubbing big studio bosses and helping break their monopoly on the industry.

Born Issur Danielovich on Dec. 9, 1916, in Amsterdam, New York, Douglas was the only son of seven children born to illiterate Russian immigrants.

After graduating from high school, he hitch-hiked to St. Lawrence University in Canton, New York, where he became a wrestling champion. He also staged and starred in theatrical productions and changed his name to Izzy Demsy.

After St. Lawrence, he graduated from New York’s American Academy of Dramatic Arts in 1941 and changed his name to Kirk Douglas. He joined the Navy following two small Broadway roles.

While in the Navy he married British actress Diana Dill and they had two sons, Michael and Joel, before the marriage ended after eight years.

Douglas had a reputation as a Hollywood ladies’ man. Among the lovers listed in the 1988 book “The Ragman’s Son,” one of several books he wrote about his life, were Joan Crawford, Marlene Dietrich, Rita Hayworth, Marilyn Maxwell, Patricia Neal and Gene Tierney.

While making “Act of Love,” Douglas met and Anne Buydens, the film’s publicist, and they married in 1954. Their marriage became one of Hollywood’s most enduring despite his affairs. They had two sons, Peter and Eric.

Douglas, who survived a 1991 helicopter crash that killed two people, tried to discourage his children from following him into acting. Still, Michael became a superstar and a successful producer, Joel and Peter also were producers and Eric was an actor until his 2004 death from a drug overdose.

“You see how they listened to me,” Douglas once said.

Douglas, who grew a long white ponytail in his later years, published several books, including a book of poetry, prose and photographs in 2014 and “Kirk and Anne: Letters of Love, Laughter and a Lifetime in Hollywood,” in 2017 with his wife.

He established the Douglas Foundation for making charitable donations and in 2015 he and Anne announced plans to give away his $80 million fortune to a variety of causes. The beneficiaries included a shelter for homeless women named after Anne, the Los Angeles public school district, St. Lawrence University and hospitals.

To mark his 99th birthday in 2015 he donated $15 million to the Motion Picture and Television Fund to help build a facility for entertainment industry figures with Alzheimer’s disease.

By In Cyprus
Previous articleShowers and possible thunderstorms today, lower temperatures from tomorrow
Next articlePaphos: Man succumbs to injuries after apparent fall