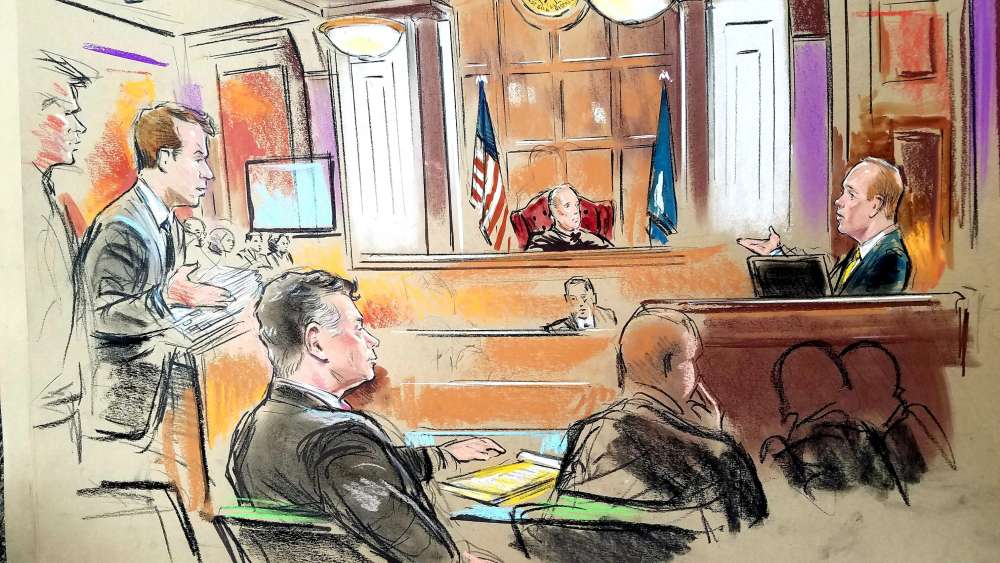 The federal judge in the trial of U.S. President DonaldTrump‘s former campaign chairman Paul Manafort expressed contrition on Thursday to jurors after berating prosecutors for allowing a witness to watch the proceedings, despite having given his earlier approval.

The rare apology by U.S. District Court Judge T.S. Ellis surprised observers in his Alexandria, Virginia courtroom, who have watched the judge repeatedly criticize the government’s handling of the case while giving leeway to Manafort’s lawyers.

“It appears I may well have been wrong,” Ellis said as the trial went into its eighth day. “But like any human, and this robe doesn’t make me anything other than human, I sometimes make mistakes.”

Ellis had chastised prosecutors for allowing IRS agent Michael Welch to be in court before he testified on Wednesday, saying he did not like witnesses present before taking the stand. When prosecutor Uzo Asonye challenged Ellis, the judge barked: “Don’t do that again. When I exclude witnesses, I mean everybody.”

Prosecutors had told Ellis he had approved having Welch and other expert witnesses attend the proceedings, a point they repeated in a court filing on Thursday asking for a “curative instruction” to the jury to set the record straight.

Some lawyers watching the case also noted Ellis did not rebuke defense attorney Kevin Downing on Wednesday after he asked the government’s star witness Rick Gates whether he had told prosecutors about four extramarital affairs.

Downing had agreed in a bench conference on Tuesday not to raise the subject with Gates, a court transcript showed. Downing later argued it was fair game because Gates had volunteered that he had one affair after being asked about his “secret life.”

Ellis sustained an objection from the prosecution and Gates never answered the question about four affairs, but some observers said the damage had already been done.

“It was highly inappropriate to raise the other affairs, and the judge’s response was very generous,” said Gene Rossi, a former prosecutor who has been watching the trial. “In my experience, another judge would have cut his head off.”

Gates, who was indicted along with Manafort, pleaded guilty and is cooperating with an investigation by Special Counsel Robert Mueller.

Manafort has pleaded not guilty to 18 felony charges of bank fraud, tax fraud and failing to disclose some 30 foreign bank accounts. He is the first person to be tried on charges brought by Mueller’s probe into Russian interference in the 2016 U.S. election.

Prosecutors said they plan to conclude their case on Friday. It is not clear whether Manafort will call any witnesses in his defense.

After wrapping up the tax portion of their case, prosecutors have moved on to bankers who were involved in extending Manafort loans during his scramble to generate cash in 2015 and 2016 after work dried up following a loss of business in Ukraine.

Melinda James, a mortgage assistant at Citizens Bank, testified Thursday that Manafort provided incorrect information in applying for a $3.4 million loan on a Manhattan condominium that was granted on March 4, 2016.

She said Manafort did not disclose that a brownstone he owned in Brooklyn had a mortgage against it and indicated the Manhattan condominium was a second residence, when it was listed for rent. Both moves improved the loan terms, James said.

Earlier this week Gates testified Manafort directed him to present banks with false documents, including an inflated profit report for Manafort’s consulting company, DMP International, LLC, to get the loans. Defense lawyers have made blaming Gates, Manafort’s right-hand man for a decade, a key plank of their defense.

Manafort lawyer Jay Nanavati appeared to make some progress toward that goal on Thursday. Under his cross-examination, James acknowledged it was Gates, using an old insurance document, who ultimately misled her about whether there was a mortgage on the brownstone days before the loan on the condominium closed.

Taryn Rodriguez, a loan officer assistant at Citizens Bank, testified about an application for a $5.5 million construction loan on the brownstone that was ultimately denied.

She said Manafort failed to disclose a multi-million dollar mortgage already taken out on the property and a $1 million business loan from the Banc of California, both of which would have affected any new loan. Rodriguez said she discovered the mortgage by researching a New York City database of property records.

Gary Seferian, a senior vice president at the Banc of California, said his bank gave Manafort the $1 million loan to rehabilitate and flip properties in the Los Angeles area, in part based on a financial statement for DMP International showing a profit of more than $4 million for 2015.

Prosecutor Uzo Asonye asked if Manafort would have qualified for the loan if he had known DMP’s profit for that year was in fact $400,000. “I don’t think so,” Seferian said.