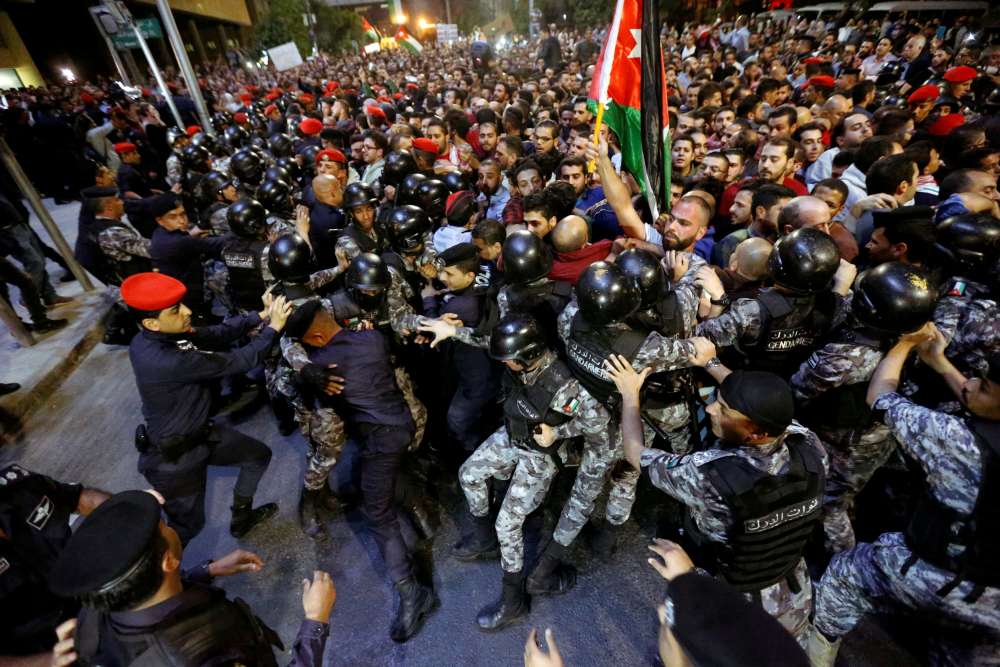 Jordan’s King Abdullah replaced his prime minister on Monday in a move to defuse the biggest protests in years over IMF-backed reforms that have hit the poor.

Government plans to lift taxes have brought thousands of people onto the streets in the capital Amman and other parts of Jordan since last week, shaking a U.S.-allied Arab country that has remained stable through years of regional turmoil.

While some celebrated the change of government, the head of the Professional Unions Association said a strike planned for Wednesday would go ahead unless the draft income tax law was withdrawn.

Police chief Major General Fadel al-Hamoud said security forces had detained 60 people for breaking the law in protests so far, and 42 security force members had been injured, but protests remained under control.

“Rest assured, Jordan is a safe and secure country, and things are under control,” said Major General Hussein Hawatmeh, head of the Gendarmerie security department, appearing along with Hamoud at a news conference.

Jordan, which has a peace treaty with Israel, has navigated years of instability at its borders, including wars in Iraq and Syria and conflict in the Israeli-occupied West Bank.

But the instability has hit the economy of a country that is poor in resources and hosts close to 700,000 Syrian refugees. Unemployment among Jordanians stands at 18.4 percent, according to Jordan’s department of statistics.

Public anger has grown over government policies since a steep general sales tax hike earlier this year and the abolition of bread subsidies, both measures driven by the International Monetary Fund.

In a sign the tax hikes could be shelved, the official Petra news agency, citing the speaker of parliament, said lawmakers were on course to ask the king’s permission to hold an exceptional session, with a majority demanding the changes be withdrawn.

“For us, our cause is the draft income tax law. The individuals (in government) do not concern us if they change, we want to change the approach of the government,” said Ali al-Abous, head of the Professional Unions Association.

Demonstrators who have converged for nightly protests near the Cabinet office have said they would disband only if the government rescinded the tax bill it sent to parliament last month.

Razzaz is a Harvard-educated economist who served with the World Bank in both Washington and the region.

Officials said he had been an opponent of reforms that hurt the poor. His appointment nevertheless sends a positive message to foreign donors that Jordan will press ahead with reforms, though in a gradual way, they said.

“I believe they have time to amend the law, to withdraw the law and make a new one that is more of a middle ground between the public demands and what the government wants,” said Mufleh Aqel, a prominent Jordanian banker.

The IMF approved a three-year extended arrangement with Jordan in 2016 to support economic and financial reform to lower public debt and encourage structural reforms.

Jordan has backed down on reforms in the past, fearing a social backlash. Until Mulki’s government, the lifting of bread subsidies and tax changes have been pushed back repeatedly.

Jordan was rocked by unrest in 2012 when the IMF told the government to lift gasoline prices.

Mulki, a business-friendly politician, was appointed in May 2016 and given the responsibility of reviving a sluggish economy and business sentiment. The tax increases had caused his popularity to plummet.

The protests widened on Saturday after Mulki refused to scrap a bill increasing personal and corporate taxes, saying it was up to parliament to decide.

The government says it needs more funds for public services and argues that the tax changes reduce social disparities by placing a heavier burden on high earners. Opponents say a tough IMF-imposed fiscal consolidation plan has worsened the plight of poorer Jordanians and squeezed the middle class.

Jordan’s economy has struggled to grow in the past few years in the face of chronic deficits, as private foreign capital and aid flows have declined.