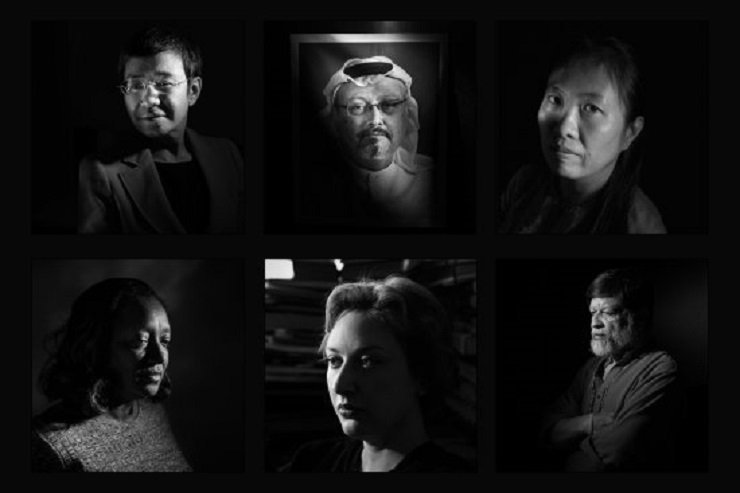 Time has selected a group of journalists they named as “The Guardians” for the magazine’s 2018 Person of the Year.

The four journalists include murdered Washington Post columnist Jamal Khashoggi; Maria Ressa, an editor of a Philippine news website critical of its president’s violent policies; Wa Lone and Kyaw Soe, two Reuters journalists imprisoned in Myanmar for investigating the massacre of Rohingya Muslims; and the staff at the Capital Gazette newspaper in Annapolis, Md. where four journalists and a sales assistant were killed by a gunman in June.

“Like all human gifts, courage comes to us at varying levels and at varying moments,” the magazine’s editor-in-chief Edward Felsenthal wrote in an essay about the selection. “This year we are recognizing four journalists and one news organization who have paid a terrible price to seize the challenge of this moment: Jamal Khashoggi, Maria Ressa, Wa Lone and Kyaw Soe Oo and the Capital Gazette of Annapolis, Md.”

TIME selected the group “for taking great risks in pursuit of greater truths, for the imperfect but essential quest for facts that are central to civil discourse, for speaking up and speaking out.”

The magazine said the four individuals and the lone newspaper symbolize something bigger than themselves.

“They are representative of a broader fight by countless others around the world — as of Dec. 10, at least 52 journalists have been murdered in 2018 — who risk all to tell the story of our time,” Felsenthal wrote in his essay.

This marks the first year TIME has named someone who is no longer alive a Person of the Year, the magazine noted.

TIME has made the designation every year since 1927. Last year, magazine editors selected The Silence Breakers, the individuals who spoke up and sparked a national reckoning over the prevalence of sexual harassment and assault.