It started with a kiss: how Juncker wooed Trump 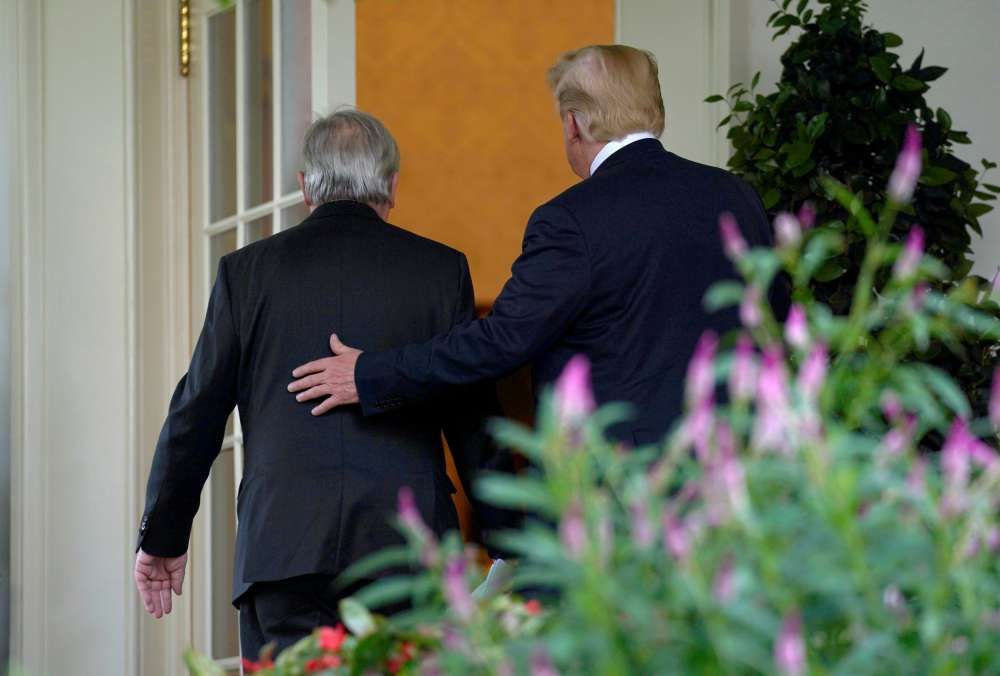 Jean-Claude Juncker was hailed as a hero by European business on Thursday for making Donald Trump blink and withdraw a threat to slap punitive import tariffs on EU cars and so escalate a transatlantic trade war.

The White House deal is one to savour for the European Commission president, two weeks after doubts were raised, notably in Germany, over his fitness for the job after he was taken unwell during a NATO summit where the U.S. president trashed his European allies.

The former Luxembourg premier and 30-year veteran of EU backroom haggling and his aides stressed the limits to what was achieved — well aware of Trump’s ability to change tack. And though Germany cheered that Juncker had bought their car makers time while talks are launched on freeing up trade, France sounded more cautious on possible new U.S. farm imports.

Yet there was widespread praise among European governments and business for the Commission’s strategy, in renewing offers that Trump had dismissed in the past for more free trade talks and sticking to its own threat of retaliation against U.S. products by the world’s biggest economic bloc. There was appreciation too for Juncker’s personal charm offensive.

A photograph of Juncker planting one of his trademark kisses on Trump’s cheek at the White House set the tone, prompting the U.S. president to tweet about “love” across the Atlantic.

“A lot of love went into their preparations,” a Brussels diplomat from one EU member state said.

“The old fox showed that, even from the most difficult of political situations, he can find a diplomatic way out.”

Juncker, who has not spared his criticism of Trump in public or private, also clearly thought about how to break the ice and presented the president with a framed array of photographs showing U.S. war graves in his native Luxembourg — including that of one of Trump’s personal heroes, General George Patton.

“Dear Donald, we have history in common,” Juncker wrote and later expanded on the theme of shared values. It was all rather different in tone from a comment by Juncker last month when he said Trump had called him a “brutal killer”.

Juncker told the Politico news website that talks had been helped “by the fact that we get along well, surprisingly” and that he had spoken his mind — firmly but politely — at last month’s G7 summit: “He doesn’t like those who beat about the bush,” Juncker said of Trump.

Aides to Juncker conceded that the EU delegation had been surprised at how well the White House meeting went, having been at pains to play down expectations that he could succeed where others have failed to persuade Trump to back down on tariffs.

Pressed to explain the success, one senior EU official said Trump’s team appeared to have been tempted by offers to increase EU imports of liquefied natural gas and soybeans and cooperate on challenging China’s trade practices.

The Americans also focused on the fact that Juncker had 28 EU economies behind him and the stakes were high.

“I think they weighed what it would mean to open up a 50 billion euro trade nightmare,” the official said.

“They wouldn’t know how this would end.”

Even some European politicians generally wary of the car industry and of past efforts to ease U.S. trade sounded impressed.

“I’d like to express my respect for this achievement by Juncker,” tweeted Jan Philipp Albrecht, a member of the European Parliament from the German Greens.

“Yes, there is a big IF with this unstable Trump administration and there are many unanswered questions … But managing this shows the real potential of EU leadership.”

By In Cyprus
Previous article
Blood moon event dedicated to victims of Greece’s fires
Next article
Casale Panayiotis: A magical destination with all the amenities for the perfect day.