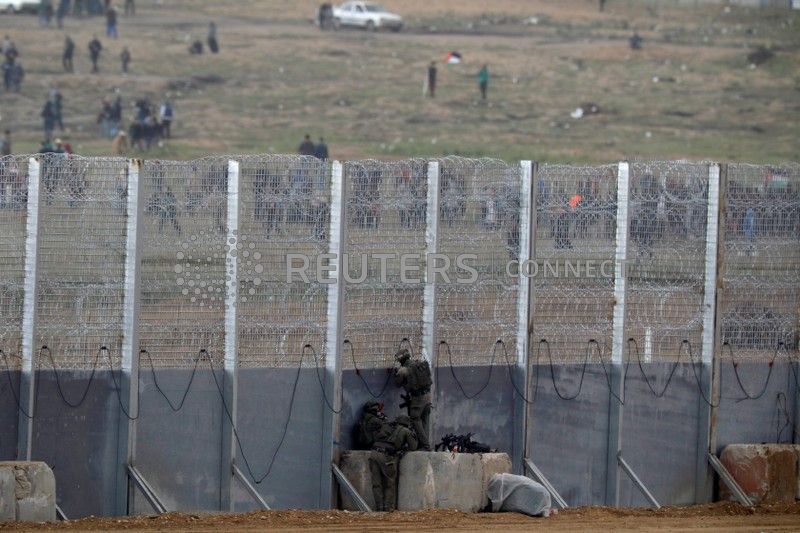 Israel reopened its commercial crossing with the Gaza Strip on Sunday but kept military reinforcements deployed on the volatile frontier, a day after a smaller than expected Palestinian protest along the border.

Gaza medical officials said four Palestinians were killed by Israeli fire during demonstrations on Saturday marking the first anniversary of the “Great March of Return” protests.

Around 200 Gazans have been killed by Israeli troops since the protests started on March 30 last year, according to Palestinian Health Ministry figures. An Israeli soldier was also killed by a Palestinian sniper in July.

But while around 40,000 protesters, some hurling grenades and explosives, turned out on Saturday, according to the Israeli military, several signs pointed to pullback from wider confrontation amid Egyptian efforts to reach a long-term ceasefire that would also ease blockaded Gaza’s economic plight.

An Israeli military spokesman noted that there had been “significantly less violence” during Saturday’s protest, which organisers had billed a “million person march”, than in past weekly demonstrations.

In addition, hundreds of Palestinian men, some from Gaza’s ruling Hamas group, were deployed in bright orange vests to deter people from going near Israel’s border fence, a frequent flashpoint.

A Hamas official said Egyptian mediators were expected to hold talks in Israel to try to finalise a deal.

Israel, which considers Hamas to be a terrorist group, has maintained an official silence about any pending agreement, a week before a closely contested election in which rocket strikes from Gaza on Israeli border towns have become a main issue.

Trucks carrying food and fuel rolled into Gaza through the reopened Kerem Shalom crossing on Sunday despite the firing of several rockets at southern Israel overnight and Israeli tank fire on Hamas positions in response. No injuries were reported on either side of the border.

The crossing had been closed on Monday after a rocket that wounded seven Israelis north of Tel Aviv touched off a two-day surge in cross-border violence.

Israel launched a wave of air strikes and ramped up its forces at the border after the rocket strike, as Egypt stepped up its mediation.

A prospective deal, according to three Palestinian officials close to the talks, would include steady Qatari-funded fuel supplies for Gaza, job creation projects and expansion of the territory’s fishing zone off the Mediterranean coast.

For their part, militant groups in Gaza agreed before Saturday’s protest to keep demonstrators from the border fence and stop the launching of incendiary balloons that have burned farmland in southern Israel, the officials said.

“Days separate us from achieving our demands. We are patient and the enemy is under a test,” Khalil al-Hayya, Hamas’s deputy Gaza chief, told the group’s Aqsa TV.

Prime Minister Benjamin Netanyahu, accused by far-right rivals of being too soft on Hamas, said on Sunday he ordered Israeli forces to remain at “full strength” along the Gaza frontier.

But in public remarks on Thursday, he said Israel would undertake a broad military campaign in Gaza – Hamas and Israel last fought a war in 2014 – only after exhausting all other options.