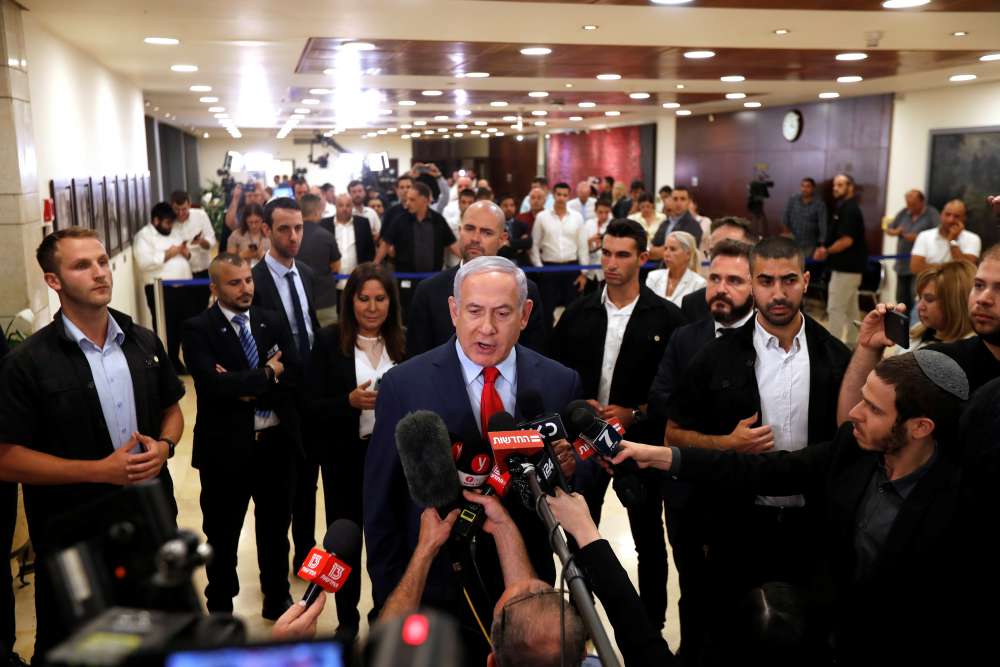 Israeli lawmakers voted to dissolve parliament early on Thursday, paving the way for a new election after veteran Prime Minister Benjamin Netanyahu failed to form a coalition government before a midnight deadline.

The Sept. 17 ballot will be Israel‘s second this year. It spells unprecedented upheaval even for a country used to political infighting and is a big blow to Netanyahu, who had claimed victory in the last election on April 9.

Parliament’s 74-to-45 vote took place just minutes after a midnight deadline for Netanyahu to assemble his fifth government.

Those parties want young religious scholars exempted, en masse from mandatory national service. But Lieberman and many other Israelis want them to share the burden.

Netanyahu denounced the draft spat as a “Kafkaesque” ruse.

“It’s just unbelievable. Avigdor Lieberman is now part of the left,” he told reporters. “It is perfectly clear that he wanted to topple this government … to cobble together a few more votes.”

Yet the new ballot represents less of a setback for Netanyahu than the alternative in which Israel‘s president, Reuven Rivlin, could have asked another politician to try and form a ruling coalition.

Faced with the prospect of having to step aside and watch one of his political rivals push him to the margins, Netanyahu instead drummed up votes to dissolve the 120-seat Knesset.

Netanyahu signalled he will run in the next election, telling reporters: “We will win”. The spokesman for his conservative Likud party sent out a text emoji showing a smiling Netanyahu with the message: “Get out and vote.”

But the failed coalition building of a 69-year-old leader who just weeks ago was hailed by supporters as a political “magician” may open rifts and stir up challenges within Likud.

The premier is also dogged by potential criminal charges in three corruption cases. He has denied wrongdoing and is due to argue at a pre-trial hearing in October against any indictment.

A new election could further complicate U.S. efforts to press ahead with President Donald Trump’s peace plan in the Israeli-Palestinian conflict. Even before it has been announced, Palestinians have spurned it as a blow to their statehood hopes.

The White House team behind the proposal, including Trump’s son-in-law Jared Kushner, is in the Middle East to drum up support for an economic “workshop” in Bahrain next month to encourage investment in the occupied West Bank and Gaza.

The group arrived in Israel on Wednesday and planned to meet Netanyahu on Thursday. “Lots to pray for!” tweeted one of the envoys, Jason Greenblatt, from Jerusalem’s Western Wall.

Three hours before Wednesday’s 2100 GMT deadline, Likud said it had secured 60 signatures, half of parliament, but shy of the majority required for a measure of stable governance.

In another sign of Netanyahu’s strong desire to retain the premiership, the opposition centre-left Labour party said it had been offered – and had refused – a chance to join a Likud-led coalition. Likud, which has long said it plans to head a strong right-wing government, neither denied or confirmed this.

First elected in the late 1990s, Netanyahu has been in power for the past decade. In mid-July, he will overtake Israel‘s founding father, David Ben-Gurion, as longest-serving premier.

Lieberman, who quit as defence minister in November, in protest at what he deemed insufficient Israeli military force in fighting Hamas in Gaza, has denied allegations that his real intention was to oust Netanyahu and lead a “national camp”.

Until the drama over coalition building, public attention had been focused more on moves Netanyahu loyalists were planning in parliament to grant him immunity from criminal prosecution and to pass a law ensuring such protection could not be withdrawn by the Supreme Court.