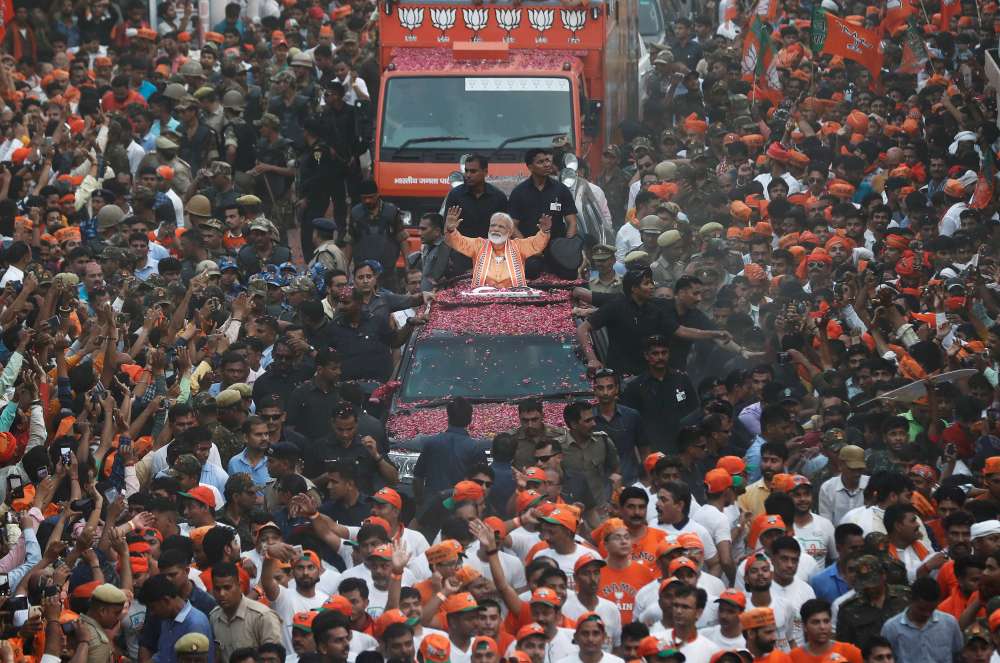 Official data from India’s Election Commission showed Modi’s Bharatiya Janata Party (BJP) ahead in 292 of the 542 seats available, well over the 272 seats needed for a majority in the lower house of parliament.

That would give it the first back-to-back majority for a single party since 1984. The main opposition Congress Party was ahead in 51 seats, figures showed.

An outright majority for Modi’s party will likely embolden Hindu groups, who want to assert their dominance in the country, to the alarm of minority Muslims.

It would also allow Modi to push ahead with reforms to combat unemployment and rural distress that have persisted during his five years in power.

The mood was upbeat at BJP headquarters in New Delhi, with party workers cheering as TV channels reported a growing lead.

“It’s a huge mandate for positive politics and the policies of Narendra Modi,” said GVL Narasimha Rao, a BJP spokesman. “It’s a huge win for India, we are humbled by the magnificence of this victory.”

“It’s obviously not in our favour at all,” said Salman Soz, a Congress spokesman. “We need to wait for the full results but right now it doesn’t look good.”

The National Democratic Alliance (NDA), led by the BJP, was ahead in 324 seats, with the opposition United Progressive Alliance winning in 111, after 10 a.m. (0430 GMT), about two hours after the counting of about 600 million votes began, Indian TV channel NDTV said.

NDTV and rival channel CNN News 18 have called the election for Modi’s alliance.

The NDA’s predicted margin of victory is much larger than surveys indicated in the run-up to the vote, when most polls showed it would be the largest alliance but would fall short of an overall majority.

Final results are due by Thursday evening.

Modi was under pressure when he began campaigning, losing three state elections in December amid rising anger over farm prices and unemployment.

However, campaigning shifted towards India’s relationship with nuclear-armed rival Pakistan after a suicide car bomb killed 40 Indian police in the contested Kashmir region in February, to the benefit of the right-wing BJP, analysts said.

“National security became the discussion,” said Harsh Pant, a political analyst at the Observer Research Foundation think-tank in New Delhi. “It allowed the BJP to shirk some issues where it was weak.”

The BJP has also capitalised on the star power of Modi, a frenetic campaigner, as well as superior financial resources.

It outspent Congress by six times on Facebook and Google advertising, data showed, and by as much as 20 times overall, sources told Reuters this month.

Police guarded voting centres in West Bengal on Thursday, where campaigning had turned violent as the BJP tried to take seats from the Trinamool Congress, a powerful regional party.

The BJP was leading in 17 seats in the state, which sends the third largest number of lawmakers to parliament, significantly better than the two seats it won in 2014, NDTV said.

“Wherever we go people are talking about a BJP wave in Bengal,” said Tapas Das, a taxi driver in the state capital, Kolkata.

“Everyone wants to see a change.”

Indian stocks surged to historic highs as Modi headed for victory. The broad Nifty index was up 1.35% at 11,896.

“For global investors, political stability and continuity is an important factor while taking a view on investing in any country,” said R Sivakumar, head of fixed income at Axis Mututal Fund in Mumbai. “This will keep India on the radar of global equity investors.”

By In Cyprus
Previous articleAfrika exoneration important for Turkish Cypriots and democracy, its lawyer tells CNA
Next articleHistoric agreement for Egypt-Europe electricity interconnector via Cyprus