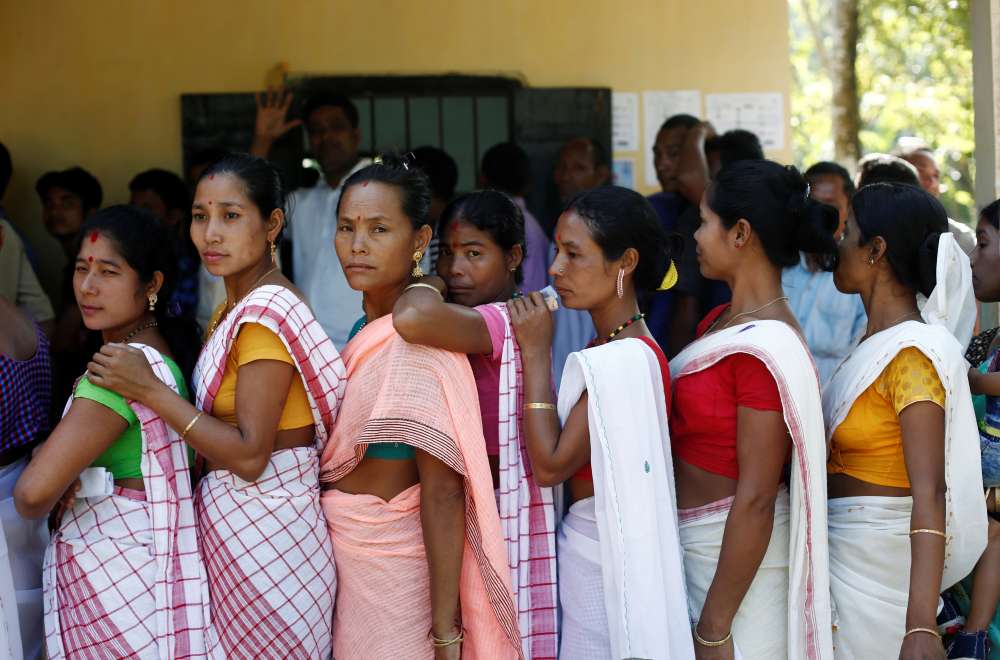 Indians began voting on Thursday in the first phase of a mammoth general election, with Prime Minister Narendra Modi gunning for a second term having campaigned strongly on his national security record following a flare up in tensions with Pakistan.

Security for the polls was increased after seven people were killed in militant attacks in Jammu and Kashmir, the country’s only Muslim majority state, and in eastern India, where Maoist insurgents were blamed for a bomb that killed a state legislator from Modi’s Hindu nationalist Bharatiya Janata Party (BJP).

Voting in the first of seven rounds is being held in 91 parliament constituencies across 20 states and federally administered regions. There are 543 seats at stake.

Modi’s BJP has entered the election as the frontrunner, despite economic distress over mounting unemployment, and weak farm incomes in rural areas, where two-thirds of Indians live.

In a posting on Twitter as voting began, Modi urged people to turn out in large numbers and said the mood nationwide was running in favour of his alliance.

Pollsters say support for the BJP rose in response to Modi’s tough stance against Pakistan, which saw aerial clashes between the nuclear-armed neighbours following a Pakistan-based militant organisation’s suicide attack in February that killed 40 paramilitary police in Kashmir.

The main opposition Congress party, which wrested three major farming states from the BJP in December by promising to waive the outstanding loans of distressed farmers, has looked for allies among regional parties to defeat the BJP over its record on the economy.

But the upsurge in nationalist fervour has undermined the opposition strategy.

“I support the prime minister’s policies, especially his foreign policy,” Sachin Tyagi, 38, a mobile phone shop owner, told Reuters near a polling station in the northern state of Uttar Pradesh.

“He’s improved India’s global standing, and taken revenge against the enemies of the country. I am happy with Modi-ji but the employment situation could be improved.”

About two dozen voters had lined up at that voting centre and more were streaming in early on Thursday. Young men in jeans and shorts, older men in white kurtas and women in colourful sarees stood in the lines.

Spread over 39 days, the final phase of the election will be held on May 19, and the result will be announced on May 23.

“The gap between Congress and the BJP is still enormous, so no one is seriously thinking that Congress is going to fill that gap,” he added. “The opposition landscape remains heavily fragmented.”

An average of four opinion polls showed the BJP-alliance on course to win 273 of the 545 seats in the Lok Sabha, the lower house of parliament, a much reduced majority from the more than 330-seat majority it scored at the last election.

In the 2014 general election, the BJP alone won a landslide 282 seats, securing a clear single-party majority for the first time in decades and raising hopes of economic reform after a period of sluggish growth.

In Uttar Pradesh, which sends more lawmakers to parliament than any other, Ajesh Kumar, who runs a roadside restaurant, said he voted for the BJP in 2014, when Hindu-Muslims riots in the area killed at least 65 people, and would do so again.

“But jobs are a problem here,” he said, echoing government and private statistics that show Modi’s government has failed to create enough work for the millions of young Indians entering the labour force each year.

Almost 900 million of India’s 1.3 billion people are eligible to vote. The first phase of voting covers an electorate of 142 million.

From sugar farmers in northern India going unpaid for produce, to small businesses in the south shut because they are unable to meet the requirements of a new, unifying national tax, discontent over the economy has brewed for months.

A Reuters analysis https://graphics.reuters.com/INDIA-ELECTION-PROMISES/010091DR1ZR of 50 pledges from the BJP’s 2014 manifesto showed Modi only partly fulfilled, or did not fulfil, most promises on the economy and business.

Having won only 44 seats last time, Congress is trying to rebuild its appeal, and has promised monthly handouts of 6,000 rupees ($86.59) for the poorest families.

It hopes to win enough seats to lure regional parties opposed to Modi to back it after the election and form the government.